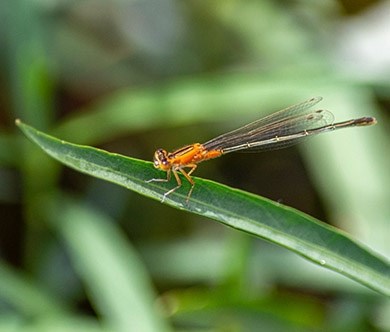 A damselfly at Lake Charles.

FAYETTEVILLE, Ark. – A U of A biologist is part of an international team of researchers building a volunteer network of citizen scientists to help monitor the abundance of dragonflies and damselflies.

Recent studies have indicated that insect species in general are declining throughout the world and could be headed toward collapse due to intensive agricultural practices, climate change and habitat loss. For many species, however, there isn’t enough baseline data to determine trends in insect abundance.

Adam Siepielski, associate professor of biology, is part of a team working on a solution – establishing a volunteer network that will collect data on odonata, the scientific name for dragonflies and damselflies. Odonata are easy to spot, often vividly colored and an important indicator group of species reflecting environmental changes in freshwater biodiversity.

“Volunteer nature enthusiasts can greatly help to monitor the abundance of dragonflies and damselflies, iconic freshwater sentinels and one of the few nonpollinator insect groups appreciated by the public and amenable to citizen science,” the scientists wrote in a paper published in the journal BioScience.

Researchers propose modeling the volunteer network on a similar collection of projects, organizations and individuals dedicated to butterflies. “The network has improved knowledge of not only butterfly geographical distributions but also their relative population sizes across years and the effects of large-scale environmental change,” researchers wrote.

“We are hopeful that with similar efforts dedicated to odonata, great strides can be made in our understanding of changes in their abundances and distributions too. They really are amazing animals and fascinating to observe,” said Siepielski.

An odonata network would fill in gaps from areas of the world with little information, and incorporate existing data-collection efforts. Ideally, volunteers would collect data at a fixed location for 10 to 15 years, and have a standardized portal to report their findings.