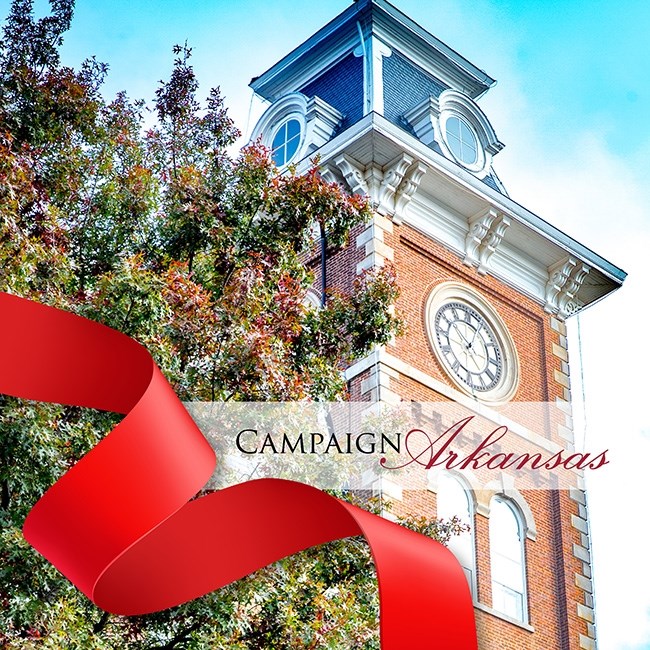 FAYETTEVILLE, Ark. – The University of Arkansas successfully concluded its capital campaign, Campaign Arkansas, by raising a record $1,449,703,813 for student, faculty, program and capital support. The gifts and pledges made during the eight-year effort will advance academic opportunity at the university, continue to transform the campus and promote student success.

"The success of Campaign Arkansas can be attributed to the generosity of the university's alumni and friends and support from the entire campus community, as well as the hard work of our deans and unit leaders and advancement team," Chancellor Joe Steinmetz said. "All of these groups were unwavering in their commitment to strengthening the university and providing additional resources for student and faculty success.

"We also recognize that celebrating this accomplishment comes with an acknowledgement of the current circumstances in our region, state and our country. We realize many of our fellow Arkansans and others around the country are facing difficulty at this moment. We hope to be able to do our part in helping students and their families overcome their financial obstacles, support faculty who are involved in innovative research, restore economic development for our region and our state, and offer vital programs on campus to keep our students on track for success, all thanks to Campaign Arkansas."

Over the course of the campaign, gifts accounted for the following:

There were 706 new student support accounts, such as scholarships and fellowships, created as a result of Campaign Arkansas, as well as 92 faculty and staff support accounts, including 46 new endowed faculty positions.

Ayanna Evans, a first-generation college student, received the Camden E. and Dortha Sue Greene CARE Endowed Scholarship, which was created during the campaign. The Texarkana native had just taken out a loan to help pay for school when she was notified of her award.

"It encouraged me to keep going," Evans said of the scholarship. "It motivated me, because it meant people saw something in me. This was an opportunity for me to help finance my education. I'd like to say a big 'thank you' to the donors. People who donate scholarship money are essentially investing in complete strangers. I'm thankful someone saw something in me."

Rafael Toche Pizano, a first-generation student from Springdale who is a double major in German and computer science, also received scholarship support for his study abroad experience through the Honors College. The experience afforded him the opportunity to spend the summer in Germany in 2018 and strengthen his knowledge of the language and culture.

"The life experiences and the knowledge that is acquired while studying abroad is invaluable," he said. "Continuing to fund students to study abroad is crucial for the sake of our future. Not only is it becoming a necessity in our increasingly globalized world, but it is also an opportunity to learn acceptance, humility and discipline. It is impossible to express how meaningful these types of scholarships are to students who struggle financially."

The silent phase of Campaign Arkansas began on July 1, 2012 with an initial goal of $1 billion. It launched publicly in fall 2016, and the goal was raised to $1.25 billion in spring 2018. More than 123,400 benefactors contributed during the campaign, and $348.9 million will be added to the endowment once received.

Gary Peters, chair of the newly named William Dillard Department of Accounting and holder of the S. Robson Walton Endowed Professorship, celebrated the naming of his department in the Sam M. Walton College of Business during Campaign Arkansas, thanks to a planned total gift commitment of $10 million from William T. Dillard II.

"Endowments at the university produce compounding returns for Arkansas and society at large," he said. "As a result, we are all allowed to be a part of the larger purpose or story."

Gifts from individuals, such as alumni, friends, parents, faculty and staff, made up 22% of the campaign total. Another 24% came from corporations, while 47% came from foundations and 7% came from other organizations, including trusts and estates. All private gifts and pledges to the university are designated and allocated for specific purposes set forth by each donor and used solely for these purposes. The university makes every effort to align donors' giving interests with campus priorities.

"This fiscal year was undoubtedly a challenge with all of the uncertainty surrounding us and our constituents, however it was also one of the most rewarding," said Mark Power, vice chancellor for university advancement. "We saw benefactors step up to help students who were facing emergencies as a result of COVID-19 and gained renewed optimism for the future of research with the grant to create the Institute for Integrative and Innovative Research. So, while we have been experiencing unprecedented challenges, there is also a great deal of hope for the future. Campaign Arkansas will usher in new possibilities for our students, faculty, staff and campus - and for our state and nation as well.

"Throughout this year, our advancement team remained steadfast in their work - even remotely - and we experienced incredible support from the deans, unit leaders and campus community," Power said. "This year, we truly worked as a team to help each other - whether showing compassion and support to our colleagues or amplifying the voices of students who needed our assistance. I'm very proud of what we have accomplished through the entirety of Campaign Arkansas, especially this year."

The largest gift to Campaign Arkansas was announced shortly before its conclusion - a $194.7 million grant from the Walton Family Charitable Support Foundation for the Institute for Integrative and Innovative Research (I3R). The gift helped push the university past its goal of $1.25 billion.

"It was an honor to serve as chair of the Campaign Arkansas Steering Committee for the final year," Steuart Walton said. "The university staff and the committee made a lot of progress, but we can't be complacent with our efforts. We must work together to continue accelerating the transformation of the U of A for all Arkansans as a center for innovation and growth, pushing forward in our collective pursuit of excellence."

Annual Giving also made a sizeable impact during the campaign. More than 500,000 gifts and pledges added up to $96.4 million during the course of the campaign, demonstrating the power of collective giving. Assisting with this was the implementation of All In for Arkansas, an annual giving day held each spring to celebrate the university's birthday. The event raised more than $1.4 million since its launch in 2016 through spring 2019.

Campaign Arkansas was led by a 128-person steering committee and 12 individuals who served on the executive committee. Co-chairs, who served in one- or two-year terms, included Boyce Billingsley, the late Marilyn Bogle, Johnelle Hunt, Sandra Connor, Robert Connor, William T. Dillard II, Doug McMillon, Shelley McMillon, Reynie Rutledge Sr. and Steuart Walton. Joining them on the executive committee were Lee and Beverly Bodenhamer and Robert and Sandra Connor, who all served as treasurers during the eight-year effort.

Across campus, each college, school and unit also maintained their own campaign committees.