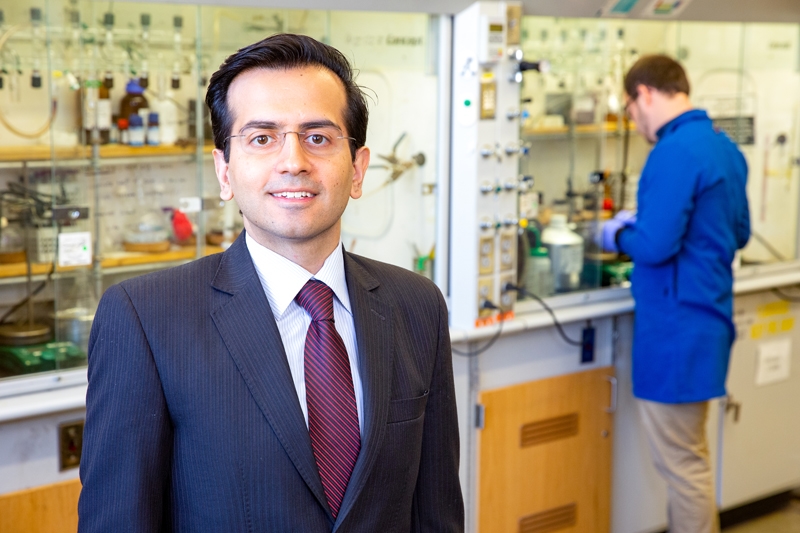 Researchers at the University of Arkansas have developed a new nano drug candidate that kills triple negative breast cancer cells.

Triple negative breast cancer is one of the most aggressive and fatal types of breast cancer. The research will help clinicians target breast cancer cells directly, while avoiding the adverse, toxic side effects of chemotherapy.

Their study was published in June issue of Advanced Therapeutics.

Researchers led by Hudson Beyzavi, assistant professor in the Department of Chemistry and Biochemistry, linked a new class of nanomaterials, called metal-organic frameworks, with the ligands of an already-developed photodynamic therapy drug to create a nano-porous material that targets and kills tumor cells without creating toxicity for normal cells.​

Metal-organic frameworks are an emerging class of nanomaterials designed for targeted drug delivery. Ligands are molecules that bind to other molecules.

“With the exception of skin cancers, breast cancer is the most common form of cancer in American women,” said Beyzavi. “As we know, thousands of women die from breast cancer each year. Patients with triple negative cells are especially vulnerable, because of the toxic side effects of the only approved treatment for this type of cancer. We’ve addressed this problem by developing a co-formulation that targets cancer cells and has no effect on healthy cells.”

Researchers in Beyzavi’s laboratory focus on developing new, targeted photodynamic therapy drugs. As an alternative to chemotherapy – and with significantly fewer side effects – targeted photodynamic therapy, or PDT, is a noninvasive approach that relies on a photosensitizer that, upon irradiation by light, generates so-called toxic reactive oxygen species, which kill cancer cells. In recent years, PDT has garnered attention because of its ability to treat tumors without surgery, chemotherapy or radiation.

Doctoral student Yoshie Sakamaki from Beyzavi’s laboratrory prepared the nanomaterials and then bio-conjugated them with ligands of the PDT drug to create nanoporous materials that specifically targeted and killed tumor cells with no toxicity in normal cells.

In addition to cancer treatment, this novel drug delivery system could also be used with magnetic resonance imaging (MRI) or fluorescence imaging, which can track the drug in the body and monitor the progress of cancer treatment.

This basic-research laboratory discovery was tested in vitro only, meaning the studies were performed with cells outside of their normal biological context. Currently, this drug candidate cannot be pursued to more advanced stages, due to laboratory and facility limitations at the University of Arkansas. In general, after a drug discovery at the laboratory level, multiple steps are necessary before a drug can be considered for marketing. These steps include animal preclinical studies and four phases of human clinical trials. Typically, in the U.S., only one drug out of several thousand drug candidates reaches the market, and this process takes an average of 12 years.

The American Cancer Society estimated 268,600 new cases of invasive breast cancer in 2019 and 41,760 deaths. Currently there are more than 3.1 million breast cancer survivors in the United States. Since 2007, breast cancer death rates have been steady in women younger than 50 but have continued to decrease in older women. This decrease is believed to be the result of earlier detection and better treatments.

Triple negative breast cancer is aggressive and lacks estrogen receptors, progesterone receptors and human epidermal growth factor receptor 2, which means it cannot be treated with receptor-targeted therapy. It is difficult to treat with existing chemotherapy and often requires surgery because it quickly metastasizes throughout the body.

Beyzavi joined the University of Arkansas in 2017 after serving as a research associate at Harvard University. Before that he was a postdoctoral awardee at Northwestern University under the co-guidance of Nobel Laureate Sir Fraser Stoddart.