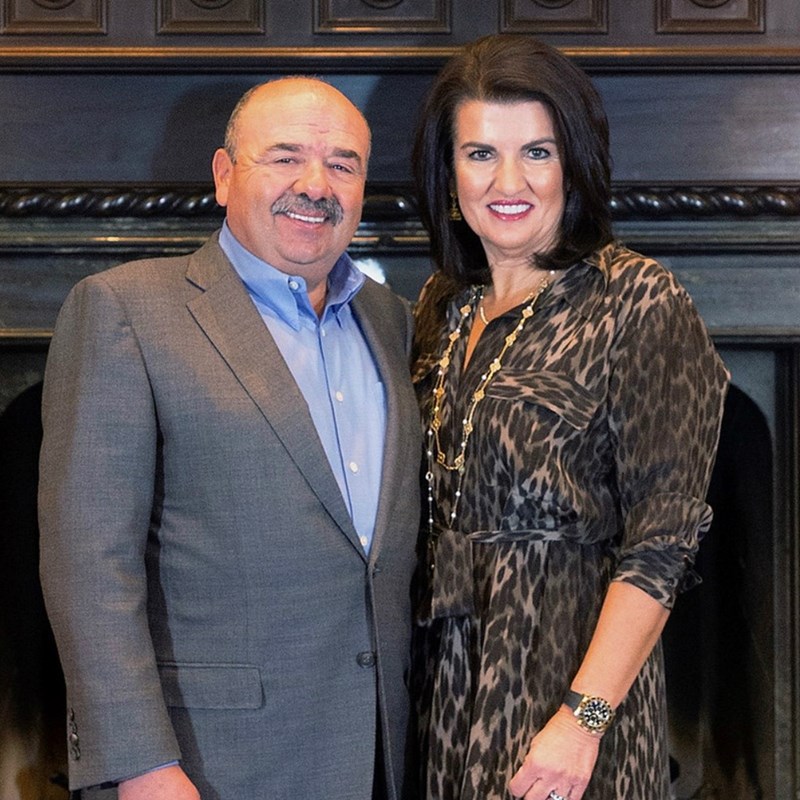 FAYETTEVILLE, Ark. – University of Arkansas alumnus Sam Alley and his wife, Janet, are contributing $2 million to create the Sam and Janet Alley Master of Science in Construction Management Program Endowment. The Little Rock couple’s gift will establish an interdisciplinary master of science in construction management program that will be housed in the College of Engineering. Their gift will also count in Campaign Arkansas, the university’s $1.25 billion capital campaign to advance academic opportunity at the university.

“When I think about how important the University of Arkansas has been to me and my family, this gift is just a small manifestation of that gratitude,” Sam Alley said. “There is no denying how critical the role my education from the U of A and the relationships I built there played in our lives. I’m excited to help create a program where future leaders in our state can learn about the great work we do in construction and find their place to add value. Being able to give back and establish a Master’s in Construction Management Program is an honor and a dream come true.”

“The Alleys are a hardworking, entrepreneurial family, and their passion for the University of Arkansas and the state has always left an impression on me,” said Chancellor Joe Steinmetz. “As a fellow first-generation college graduate, I recognize the struggles and successes Sam has felt during his career, and I applaud his family’s decision to pave the way for the future of construction management. This interdisciplinary effort will help the university offer a new graduate degree to students who aspire to be leaders – like Sam – in the construction industry.”

The connection between the Alleys and this new program is natural, given Sam Alley’s extensive career in construction. Alley found a passion for engineering – particularly civil engineering – in high school and began working for Pickens Bond Construction Company while he was a student at the University of Arkansas. He earned a Bachelor of Science in Civil Engineering from the College of Engineering in 1979 and immediately went to work as a project manager with the company. Inspired by his father, who was an entrepreneur, Alley co-founded VCC in 1987. The company is a leader in the construction industry and recognized as the largest retail contractor in the United States, and Alley serves as chairman and chief executive officer.

“We strongly believe that some of the greatest work opportunities for the next generation will exist in the construction industry,” Sam Alley said. “And, as an industry, we have a perception problem where those opportunities are not being seized at a high enough rate. Nationally, there is a severe shortage of young professionals entering the field. It is critical that we all do our part to educate talented people in the field of construction, and I believe the state of Arkansas can lead the charge in that regard. We have an unbelievably strong pool of students at the University of Arkansas. I hope this program will inspire some of them to recognize that, in construction, they can be entrepreneurs, harvest great financial opportunities and have a significant impact on the built world in their communities.”

The Sam and Janet Alley Master of Science in Construction Management Program will be interdisciplinary in nature and involve the College of Engineering, Sam M. Walton College of Business, Fay Jones School of Architecture and Design, and the School of Law. The endowment will support the creation of the Master of Science in Construction Management, including the costs associated with instructor salary, course development, advertising and online support and speaker seminars.

The new program has been approved by the U of A Board of Trustees and is pending approval by the Arkansas Department of Higher Education on July 31.

“We’re so grateful to Sam and Janet for their investment in this brand new online program for students from varied technical backgrounds,” said John English, dean of the College of Engineering and Irma F. and Raymond F. Giffels Endowed Chair in Engineering. “This interdisciplinary program will give students the chance to learn from faculty experts across the university, granting graduates the well-rounded education they need to be successful in today’s construction management industry. The Alleys’ longtime support of the College of Engineering has made a tremendous impact on the lives of engineering students and faculty members, and we can’t thank them enough.”

“This kind of interdisciplinary program is exactly what students today need and what industry demands,” said Matt Waller, dean of the Walton College who holds the Sam M. Walton Leadership Chair in Business. “The generous gift by the Alleys to create it will ensure that we are training and graduating the leaders of tomorrow in construction management for Arkansas and for all of the United States.”

In 2010, the Alleys established the Sam and Janet Alley Family Foundation Civil Engineering Access Arkansas Scholarship at the university. They are members of the Chancellor’s Society and are counted as Thoroughreds for their consecutive years of giving back to the U of A.

The Alleys have three children – Jessica, Derek and Adrianna. Jessica Alley Haddad is a 2007 graduate of the School of Law and serves as chief legal officer for VCC and the family businesses. Both Derek Alley and Adrianna Alley Sapra hold leadership positions with the company as well.

“Being the first in my family to graduate from college, the university represented a generational shift for educational and financial freedom for my family,” Sam Alley said. “It opened doors of opportunities that, before we moved to America, we could only dream about. That impact can never be overstated. Just as importantly, the university represents lifelong relationships that have nourished our lives with fun and fellowship. The Razorback community is one that we are infinitely proud to be a part of, and we are excited to be a small part of the next generation taking us all to new heights.”