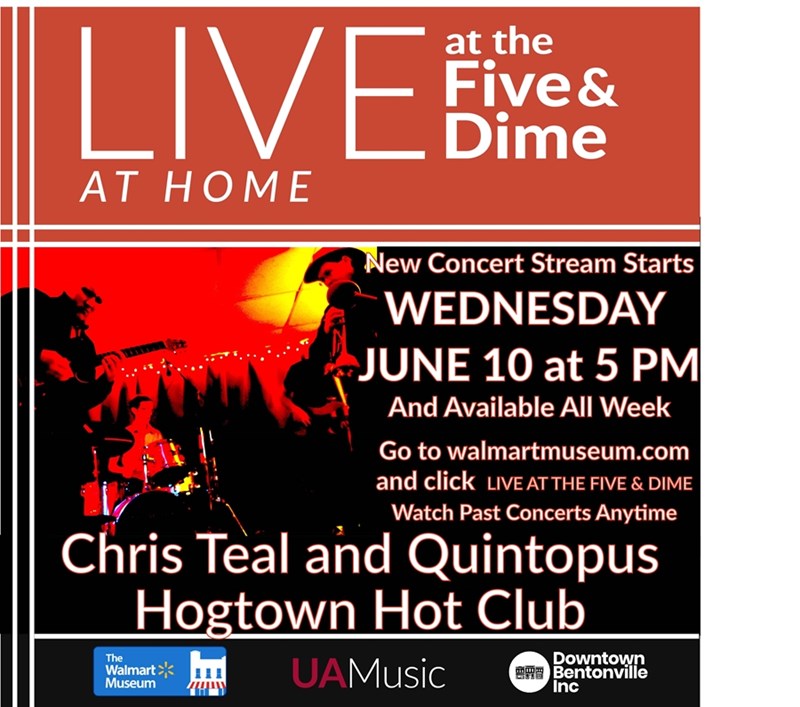 The third season of the "Live at the Five & Dime" concert series continues online at 5 p.m. Wednesday, June 10, with a double feature.

Quintopus mixes up its own electro-pop futurism out of a little jazz, a little rock, a splash of alternative indie pop, and a good old-fashioned sense of adventure. The band was formed in Rochester, New York, in 2009 by drummer Chris Teal and guitarist Mike Frederick and has released three albums on ears&eyes Records including "Voyage to Ornoc," "April Showers," and "Prehistoric Beach."

All four musicians are faculty for the IfCM Jazz and Creative Music Camp: Virtual Edition taking place June 22-26 for youth and adults hosted in collaboration with the University of Arkansas by the U of A Community Music School. Information is at quintopus.bandcamp.com.

This year's Live at the Five & Dime series is beginning with short concerts online instead of on the Bentonville square. New concerts are posted each Wednesday at 5 p.m., but you can tune in anytime to enjoy this season's past performances by faculty and student musicians from the U of A's Department of Music and their friends.

Live at the Five & Dime At Home is a collaboration between the Department of Music, the Walmart Museum, and Downtown Bentonville Inc.

Click on the event below to watch the newest concert or any of this season's past concerts.