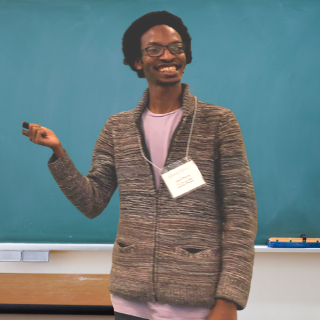 Mutanguha, who earned his Doctor of Philosophy degree in mathematical sciences, will spend four years furthering his research in mathematics as a result of the placements.

"These are highly prestigious postdoctoral positions. Such recognition speaks to the high caliber of his work, and to his outstanding potential as a research mathematician," said Mark Johnson, professor and chair of the Department of Mathematical Sciences in the J. William Fulbright College of Arts and Sciences.

A native of Rwanda, Mutanguha received his bachelor's degree in 2014 at Oklahoma Christian University in Edmond, Oklahoma. With just a few weeks remaining in his undergraduate career, Mutanguha had planned to seek a job in computer programming, an area he had enjoyed since high school.

"A couple of days before graduation I received the graduate assistantship offer. I enjoy math a lot more than programming, so I was excited to take the offer," Mutanguha said.

Research was a new experience for Mutanguha. He said when he joined the U of A, he did not have an understanding of what math research entailed.

"In math, this is quite a common situation since it takes covering so much background material before you can start doing original research," he said.

Mutanguha's advisor, associate professor Matt Clay, taught one of the introductory courses incoming math graduate students are expected to take in preparation for the qualifying exams. Clay taught one topic that Mutanguha found interesting, and the two began a directed reading course in what would become Mutanguha's focused research area — geometric group theory.

"JP was my first student to advise," Clay said. "I was extremely fortunate to have the opportunity to work with such a talented student."

Clay said he saw a difference in Mutanguha's work, explaining that his answers were not calculated in the same manner as most students.

"He was very hard-working. He was always right, but his answers followed a different path," Clay said.

Progressing through his doctoral studies, Mutanguha said that research itself was difficult.

"I only knew math in the context of the classroom. In tests and homework, you know the problems given to you are solvable and also solvable with the time you have. But when you start working on open problems, then it is unclear if it is even solvable within weeks or years," he said.

The most difficult part of his research was continuing to push, not knowing when that illuminating idea will come.

"I had a stretch of over a year where I was very frustrated that I was not making any progress, then one day I had an idea that was the first breakthrough and led to my first paper," Mutanguha said, adding that his advisor was very good at constantly providing encouragement during the slow stretches.

The appointment at the Max Planck Institute for Mathematics is scheduled from September 2020 through August 2021. Mutanguha planned to visit his home country for a month before moving to Germany but has delayed his travel plans due to travel limitations caused by the coronavirus pandemic.

Researchers at the Max Planck Institute do not have teaching duties but instead participate in projects with other guest researchers in various fields. Mutanguha said he is hoping to learn a lot of math from that environment, adding that he expects to collaborate with plenty of other scholars from around the world.

In the fall of 2021, Mutanguha will return to the U.S. to begin a coordinated offer from the Institute of Advanced Study and mathematics department at Princeton University. The first third of this three-year placement will include research at IAS, followed by two years with additional teaching duties at Princeton.

Mutanguha has not settled on a career goal but hopes to find an enjoyable way to use his research, be it in academia or industry. He said his experience as an international graduate student at the university was positive.

"I learned a lot from my professors and fellow grad students. The department as a whole was very supportive," he said.