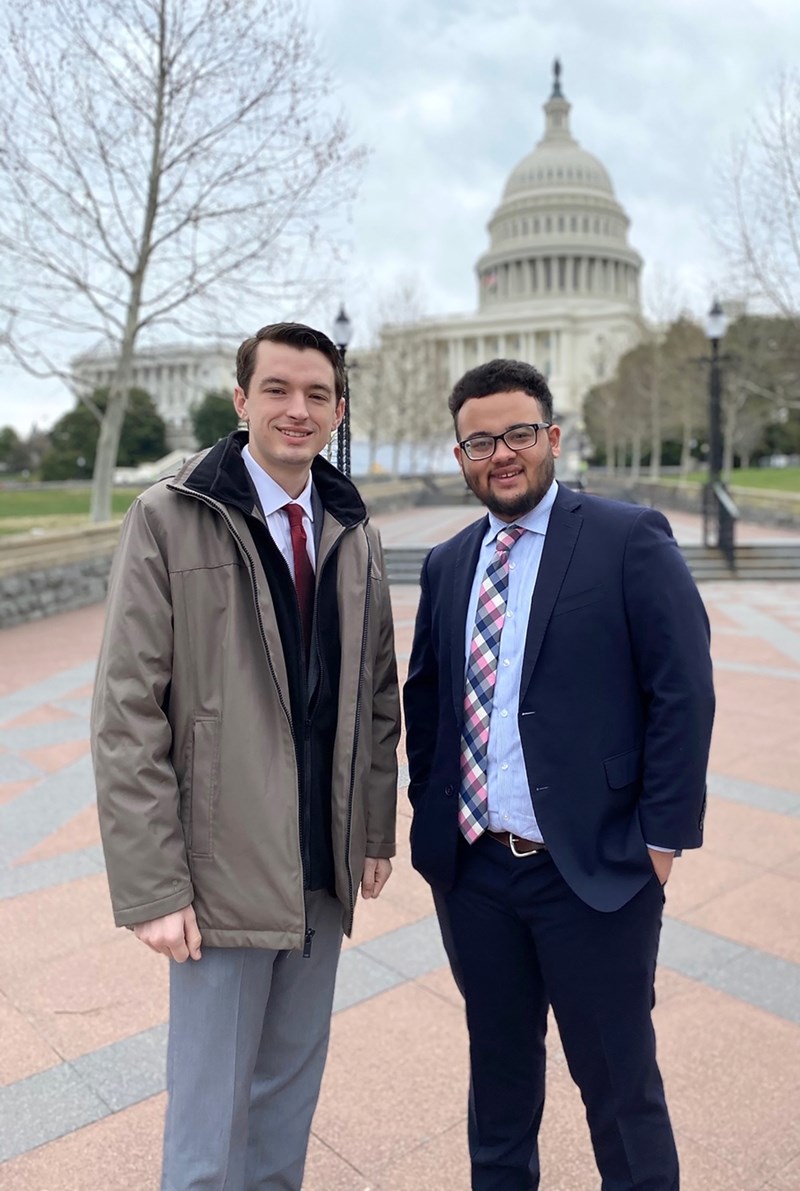 FAYETTEVILLE, Ark. – Bryce McWilliams and Logan Moss, a pair of students in U of A's Dale Bumpers College of Agricultural, Food and Life Sciences, participated in Agriculture's Promise, a professional development and networking conference in Washington, D.C., in early March.

Agriculture's Promise is sponsored by the National Young Farmer Educational Association, which focuses on educating agricultural leaders. The purpose is to allow students to experience policy making in person, to engage in issue-based discussions, broaden awareness of political affairs, and sharpen leadership and communication skills.

"Honestly, it was one of the most interesting three days of my life," said Moss. "Bryce and I had the opportunity to represent Bumpers College with schools from across the country to discuss key agricultural issues. We toured our nation's beautiful capital and meet industry leaders like Matt Mikita (head of government relations, Tyson Foods) and Bill Northey (undersecretary, USDA). We also met with Congressman Bruce Westerman and Senator John Boozman's staff to discuss issues. I am extremely blessed to attend a college that goes out of its way to make sure students get the best educational opportunities available and all the tools necessary to chase their dreams."

Attendees heard from representatives from agricultural production and education, and visited with leaders of agricultural business, grassroots agricultural organizations and congressional staffers.

In different sessions, participants developed talking points and presented them to congressional staffers from their respective districts, developed stories about why agriculture is important and related the topics to their personal experiences, and took part in a strategic thinking workshop led by agricultural communications professionals. They also went on a night-time tour of national monuments in the area.

"I was able to experience agricultural policy first-hand and how it plays a role at our nation's capital," said McWilliams. "U.S. Senator John Boozman's staff welcomed us to the senator's office and informed us of some of the current issues affecting American agriculture. We also met with Congressman Bruce Westerman and discussed agricultural and environmental issues, as well as things happening in Bumpers College. I learned the vital role our elected officials play in the agricultural industry on the national and international stage. As a conference, we were able to collaborate and share issues important to us, create an official list of those issues and share them with Arkansas's national delegation on Capitol Hill, which brought memories I will never forget."