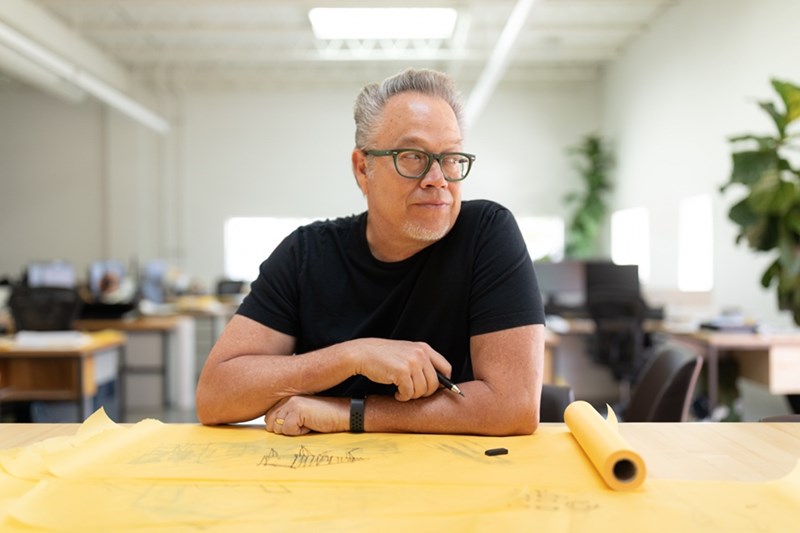 UPDATE: The following event has been postponed.

The Pryor Center Presents lecture series continues with Marlon Blackwell, FAIA. Blackwell will present 'Ozark Tales and Abstractions' at the David and Barbara Pryor Center for Arkansas Oral and Visual History in the J. William Fulbright College of Arts and Sciences.

Blackwell will share stories and experiences of designing and building in the hills of Arkansas and other places in flyover country. He will demonstrate how his ideas are generated from careful observations of intersections of nature-made and culture-made conditions particular to the varied contexts he works in.

Using examples of selected design works from his firm, Marlon Blackwell Architects, and anecdotes from his own life, he will speak to resilient design that is a marriage of details, form and place.

Marlon Blackwell, FAIA, is a practicing architect in Fayetteville, and serves as the E. Fay Jones Chair in Architecture at the Fay Jones School or Architecture and Design at the University of Arkansas. Work produced in his professional office, Marlon Blackwell Architects, has received national and international recognition with significant publication in books, architectural journals and magazines and more than 160 design awards.

Marlon Blackwell Architects received the 2016 Cooper Hewitt National Design Award in Architecture and ranked number one in design as part of the 2016 Architect 50. In recognition of his enduring contributions to architecture theory and practice, Blackwell is the recipient of the 2020 AIA Gold Medal.

He was also a 2019 Resident Fellow of the American Academy in Rome, was inducted into the National Academy of Design in 2018, and was selected as a United States Artists Ford Fellow in 2014. He received the E. Fay Jones Gold Medal from AIA Arkansas in 2017 and the 2012 Architecture Prize from the American Academy of Arts and Letters.

A monograph of his early work, "An Architecture of the Ozarks: The Works of Marlon Blackwell", was published in 2005 by Princeton Architectural Press, who will also publish a new monograph titled "Radical Practice" to be released in 2021.

The Pryor Center is located at 1 East Center Street, Suite 120, and parking is available on the Fayetteville Square.  The event is free and open to the public.