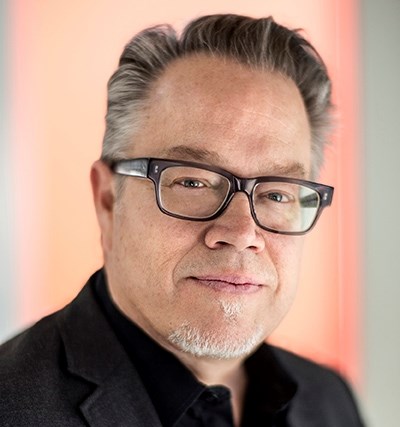 Marlon Blackwell, a Distinguished Professor at the University of Arkansas, has been awarded the 2020 Gold Medal from the American Institute of Architects.

FAYETTEVILLE, Ark. – Marlon Blackwell, a Distinguished Professor at the University of Arkansas, will be awarded the 2020 Gold Medal from the American Institute of Architects. Joining the ranks of noted architects from around the world, Blackwell is the second architect practicing and teaching in Arkansas to be awarded the Gold Medal since the program began in 1907.

The Gold Medal is the AIA's highest annual honor, recognizing individuals whose work has had a lasting influence on the theory and practice of architecture.

He will receive the AIA Gold Medal 30 years after Fay Jones, FAIA, was accorded the same honor in 1990. Jones, an Arkansas native, was a longtime professor and founding dean of the Fay Jones School as well as a member of the first class of architecture students.

"Throughout his career, Marlon Blackwell has created inspiring architecture, transforming often limited resources into designs that celebrate each place and heighten all of our horizons," said Robert Ivy, executive vice president and chief executive officer of the AIA, and the author of the AIA monograph Fay Jones. "Like former AIA Gold Medalist Fay Jones, Marlon Blackwell reminds us that powerful architecture can take place outside the traditional centers of media and fashion."

Blackwell was named a Ford Fellow by United States Artists in 2014. His body of work was recognized with the Cooper Hewitt National Design Award in 2016, and he was selected as the William A. Bernoudy Architect in Residence at the American Academy in Rome in 2018. He also was inducted into the National Academy of Design in 2018 and received the E. Fay Jones Gold Medal from AIA Arkansas in 2017.

"Too often, it is said, 'A prophet is without honor in his own country,'" said Dean Peter MacKeith, dean and professor of architecture at the Fay Jones School, "but this recognition of Marlon Blackwell definitively accords him a deserved place in architecture culture. For our school, he is a valued colleague and faculty leader, and for the state and nation, he is a distinguished representative and ambassador. Yet in these roles, Marlon is distinguished as much by his generosity and humaneness, as he is by his talent in design and his commitment to buildings and places."

Lord Richard Rogers, honorary FAIA, was awarded the 2019 Gold Medal. Lord Rogers, along with many other Gold Medalists, is also a winner of the Pritzker Architecture Prize, an international prize often referred to as "architecture's Nobel."

"As a practicing architect and educator myself, I have become aware of the growing estrangement between the world of practitioner and that of the academy," Thom Mayne, FAIA, 2013 AIA Gold Medal recipient, wrote in a letter supporting Blackwell's nomination. "Marlon teaches, as do I, because of the great sense of responsibility to add a measure of reality to the education of architectural students while also supporting the theoretical or less pragmatic aspects of their education."

Blackwell has previously served the Fay Jones School as head of the Department of Architecture. His many honors include being named one of "30 Most Admired Educators" in 2015 by DesignIntelligence magazine. He has been a visiting professor and final review critic at schools across the country. He also served on the U.S. Department of State's Industry Advisory Group for the Bureau of Overseas Buildings Operations from 2012 to 2019.

"Marlon Blackwell is a student of his 'Place' in the world. This ethic provides a philosophical coherence to his work," wrote Canadian architect Brian MacKay-Lyons in a letter supporting Blackwell's nomination for the Gold Medal. "His is a uniquely American architecture; he builds confidently upon the American cultural landscape. His 'cultural realist' approach is democratic, looking to the ordinary and the everyday for inspiration. It is connected to society, rather than being aloof. This is not a nostalgic architecture, but an architecture of its time and place."

"Every Marlon Blackwell design is a new lesson in the transformative ability of architecture to reveal the uniqueness of every site and give meaning to any program, to achieve an expressive clarity in strong and simple forms," wrote Julie V. Snow, AIA, in a letter supporting Blackwell's nomination. "In every way, across all measures, the work raises our expectations for our own architecture and teaches us that it is possible to exceed what appears to limit us."

ARCHITECTURE OF THE OZARKS

Blackwell's professional practice, Marlon Blackwell Architects, is based in Fayetteville. The firm was the lead architect for the Vol Walker Hall/Steven L. Anderson Design Center project — home to the Fay Jones School at the U of A — which won a 2018 AIA Honor Award for Architecture.

The first monograph for Blackwell's firm, An Architecture of the Ozarks: The Works of Marlon Blackwell, was published by Princeton Architectural Press in 2005. A second monograph, Radical Practice, edited by Blackwell and MacKeith, is scheduled for release in 2020.

Jeff Shannon, former dean of the Fay Jones School, has followed Blackwell's career as both a professor and a practitioner.

"It's been a pleasure watching Marlon's practice mature. His talent, persistence and clarity of vision have long made him one of the top architects nationally, even internationally," Shannon said. "To see him now confirmed as deserving of the AIA Gold Medal validates everything I have come to know and respect about Marlon as a colleague and friend. His teaching is extraordinary and parallels his talent as a designer as well. The Fay Jones School, our faculty and students, are fortunate to enjoy his continuing contributions."

Fay Jones School of Architecture and Design: The Fay Jones School of Architecture and Design at the University of Arkansas houses professional design programs of architecture, landscape architecture and interior design together with liberal studies programs. All of these programs combine studio design education with innovative teaching in history, theory, technology and urban design. A broad range of course offerings equips graduates with the knowledge and critical agility required to meet the challenges of designing for a changing world. Their training prepares students with critical frameworks for design thinking that also equip them to assume leadership roles in the profession and in their communities. The DesignIntelligence2019 School Rankings Survey listed the school among the most hired from architecture, landscape architecture and interior design schools, ranking 10th, 14th and eighth, respectively, as well as 28th among most admired architecture schools.