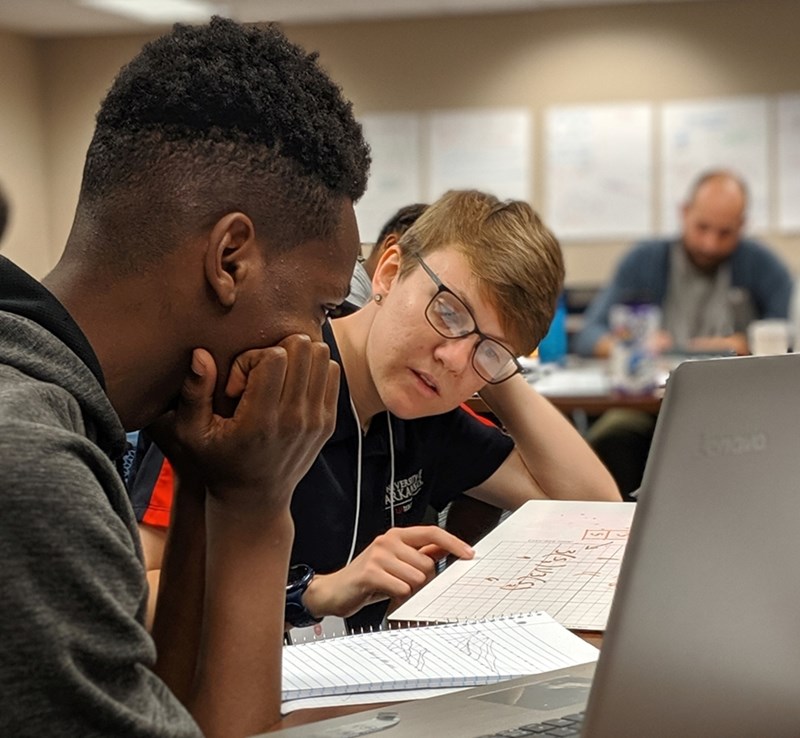 Kailee Kyger has known since second grade that she wanted to teach.

Finally, that goal is within her grasp. Kailee graduated in December from the University of Arkansas' UAteach program, and she's now licensed to teach both secondary math and computer science.

She's still surprised that she'll be teaching high schoolers rather than elementary kids, as she first planned.

"Up until 12th grade, I thought fourth-grade math was the subject for me to teach," she said. "But my math teacher told me that I should try for higher level math. It turns out, he was right."

She also acquired a crush on computer programming during her time at the U of A.

"I had to take a programming class for my math degree, and I was very reluctant," she said. "It wasn't until the end of the semester that I realized how engaging it was to code something, find out it doesn't work, and tinker my way through the code until it finally worked. It's that sense of perseverance and then accomplishment that I want to instill in others."

Kailee carried that can-do attitude with her to Illinois this past summer when she participated in the only secondary math education REU (Research Experiences for Undergraduates) in the country. The REU was held at Illinois State University, featuring Discrete Math in Secondary Math Education, and Kailee was one of only eight preservice math teachers selected from across the U.S.

"There was a lot of failure, especially at the beginning, but that just meant I had to find new ways to approach problems," she said. "And all the successes I had were a lot sweeter after going through all the sour defeats."

Kailee said it was life-changing to meet people from all over the country who were as passionate about math and computer programming as she is.

She's still in touch with many of the friends she met. In fact, the group recently traveled to the Rochester Institute of Technology and presented their individual REU findings in front of about 20 mathematicians.

Among Kailee's accomplishments at the U of A: she was the first president of the university's new student affiliate of the National Council of Teachers of Mathematics. She's currently helping to spearhead the first high school math conference and competition for students in Arkansas called the Natural State Mathematics Conference.

This story is the third in a series featuring outstanding students in the College of Education and Health Professions. The UAteach program at the University of Arkansas prepares math, science and computer science majors for a teaching license and leads to a minor in secondary education. The 26 credit hour program takes a minimum of five semesters to complete, beginning with a one credit hour introductory course that allows students to try out teaching before committing to the program.

About the College of Education and Health Professions: The College of Education and Health Professions offers advanced academic degrees as well as professional development opportunities and learning communities in service to the education and health systems of Arkansas and beyond. The college provides the education and experiences for a variety of professional roles, ranging from community mental health counselors to school teachers and leaders. Programs in adult and higher education, along with educational technology and sport management, offer a broad range of options. In addition to education-related opportunities, the college prepares nurses, speech-language pathologists, health educators and administrators, recreation professionals, rehabilitation counselors and human performance researchers.