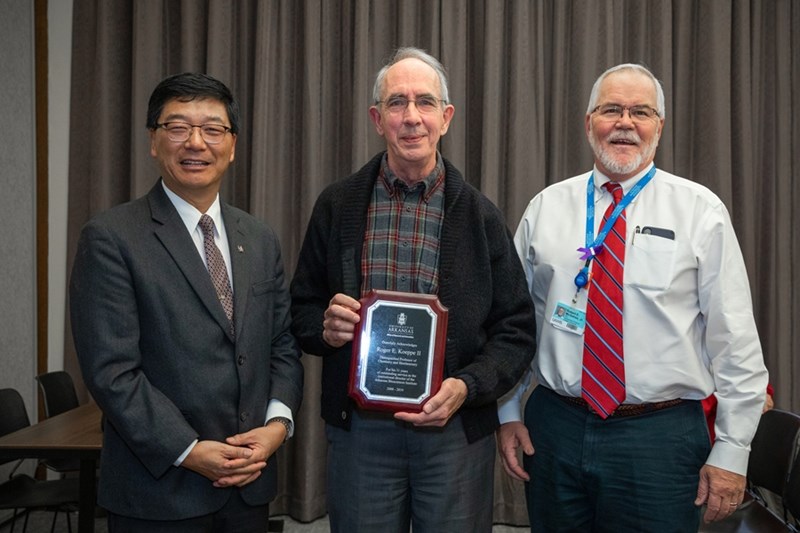 Science and engineering researchers at the University of Arkansas use research awards from the Arkansas Biosciences Institute to improve the health of Arkansans and prevent smoking-related illnesses.

Seed funding from the institute, a statewide consortium consisting of five research institutions, often enables researchers to produce preliminary results that help them and the university compete for large grants from federal agencies, such as the National Science Foundation and the National Institutes of Health.

As the U of A's institutional director and ABI representative for 11 years, Roger Koeppe, Distinguished Professor in the Department of Chemistry and Biochemistry, helped many colleagues secure funding from the institute. Koeppe was recognized for his service Thursday during a faculty town hall meeting to discuss future funding priorities and strategies of the Arkansas Biosciences Institute. The meeting was hosted by Dan Sui, vice chancellor for research and innovation.

"ABI funds have made a huge difference on this campus, certainly in terms of biosciences research, but also as leverage to attract and recruit top investigators," Sui said. "Obviously, Roger has been responsible so much its success on this campus, and we want to recognize his enormous contribution."

The Arkansas Biosciences Institute was established as a result of Arkansas' share of the 1998 nationwide tobacco settlement. Health care leaders in the state sought a productive way to disperse the state's share of the settlement. The Arkansas Biosciences Institute was created as a conduit for research that could help reduce or prevent smoking-related illnesses.

Robert "Bobby" McGehee, executive director of the Arkansas Biosciences Institute and dean at University of Arkansas for Medical Sciences Graduate School, also recognized Koeppe during Thursday's meeting. He and Koeppe served together for more than a decade.

McGehee said Arkansas is one of only two states that uses all of its tobacco settlement money for heath inititatives and healthcare research. Sui said the university will continue to use ABI funds to make new strategetic investments in biosciences research.