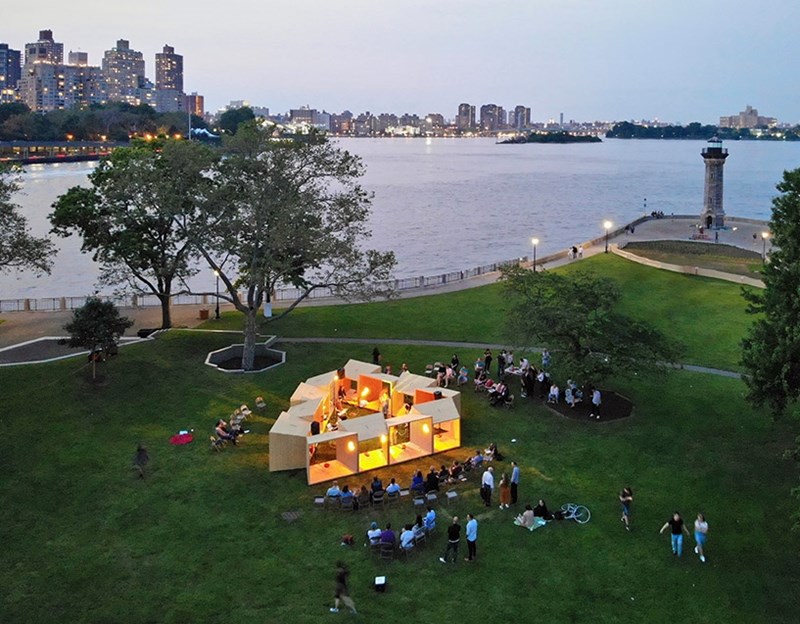 Salvage Swings was first installed in Lighthouse Park on Roosevelt Island in New York for the 2019 summer season.

FAYETTEVILLE, Ark. – A project by two Fay Jones School of Architecture and Design faculty members has been named a finalist in the 2019 Interior Design Best of Year Awards.

The Salvage Swings project is among five finalists selected for the Architectural Installation/Pop-up Category of the awards program. Winners will be announced Dec. 6 at the Javits Center in New York City.

Now celebrating its 14th year, Interior Design's Best of Year is the design industry's premiere design awards program, honoring the most significant work of the year as well as recognizing designers, architects and manufacturers from around the globe. Awards categories range from product design to buildings.

Their pavilion design was the winner of the 2019 City of Dreams international pavilion competition hosted by Figment NYC, Emerging New York Architects and Structural Engineers Association of New York. The pavilion was first installed on Roosevelt Island in New York for the 2019 summer season.

Salvage Swings is constructed from cross-laminated timber (CLT) that was salvaged from the shipping palettes of the newest residence hall on the University of Arkansas campus, Adohi Hall. The pavilion consists of 12 repetitive modules that frame swings and views of the surrounding landscape. The open framework of the pavilion hosts a variety of activities, including picnics, concerts and hide-and-seek games.

The project considers how a temporary pavilion can utilize waste and avoid ending up in the landfill. Prefabricated finger joint connections and manageable piece sizes allow for the project to be flat-packed, shipped and assembled on site within a matter of days. The modular design allowed the pavilion to be installed following the summer in new locations and configurations.

Colangelo and Sharpless conceived of the pavilion design while working on an entry for the City of Dreams competition, which seeks proposals that highlight sustainable building practices, with a focus on recycling.

"While we were working on the competition design, we noticed the CLT shipping palettes being stored on the University of Arkansas campus and saw the material as a great opportunity to discuss the challenges of construction waste management, as well as the use of timber as a sustainable building material," Colangelo said.

They also viewed the project as an opportunity to tap into the growing knowledge base around mass timber construction in the Fay Jones School.

"Early on in the process, we began prototyping the construction details in collaboration with the school's Fabrication Labs, with an effort led by Randal Dickinson, as well as some students, including Shiloh Bemis and Bryan Murren," she said.

They pre-fabricated the full pavilion in the school's Fab Labs in spring 2019.

This is the first time for Somewhere Studio to submit and to be selected as a finalist for the Interior Design Best of Year awards.

"We are thrilled to be amongst such a talented list of architecture and design practices," Colangelo said. "Somewhere Studio, along with the school's FabLab staff and the students who worked on both the fabrication, initial installation and re-install, all put a lot of hard work and love into the project — so it's wonderful to see it recognized on an international level for the entire team."

Salvage Swings was first installed in Lighthouse Park on Roosevelt Island, where the pavilion served as the centerpiece of the Figment NYC arts festival in early June and remained open to the public all summer. From September through mid-October, eight of the swings were installed on the north lawn of Vol Walker Hall, home to the Fay Jones School, as part of the school's Timber! Design Excellence in Timber and Wood Symposium.

Somewhere Studio is now working with the Scott Family Amazeum in Bentonville to install Salvage Swings there in spring 2020.

Through their studio, Colangelo and Sharpless hope to continue exploring timber in their design work. They were recently shortlisted for an architectural pavilion for TEMPOart, a non-profit arts organization in Portland, Maine. TEMPOart called for proposals that spoke to the theme of "Resilience in Place." Recognizing the theme and prominence of the timber industry in Maine, their proposal, called "Carved Collective," is an interactive sculpture constructed out of 100 eastern white pine logs.