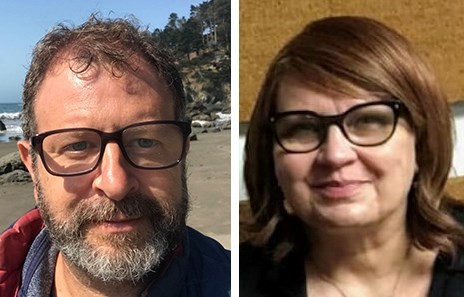 Photos submitted by each playwright.

FAYETTEVILLE, Ark. – The Department of Theatre in the University of Arkansas’ J. William Fulbright College of Arts and Sciences has named playwrights Jason Grote and Alyson Mead the co-winners of the 2019 Kernodle New Play Award for their plays Desire Path and The Flora and Fauna.

The reading committee – composed of U of A graduate students and faculty members – also named Candrice Jones’ play Flex as a finalist. The contest, named in honor of University of Arkansas faculty member George Kernodle, had over 150 submissions in 2019, demonstrating the abundant diversity of new work being created by playwrights across the country.

“It’s unusual for us to name co-winners, but both scripts had passionate advocates on the reading committee,” said John Walch, assistant professor of playwriting and director of the Kernodle Award.

“Having writers working at the level that Alyson and Jason are working on is a testament to the incredible quality of our submission pool, and the contest is a great way for my students to be in conversation with some of the best playwrights in the country. I would love to find ways to bring them both to campus to further work on the plays with our students,” he said.

The prize comes with a cash award and the possibility of further development of the script.

Desire Path, by Jason Grote, takes it name from city planning, and the name for those paths people make for cut-throughs around sidewalks or trails – those diagonal shortcuts in which pedestrians have stomped out the grass. Grote’s play follows a couple’s equally quixotic journey as he deals with fallout from his stepfather’s death, she nurses a goat, and they both confront the death of the environment.

One respondent writes that the play “stands first in rank in regard to its imaginative scope and display of unchecked creative expression.”

Like any desire path, the writing ventures to places other scripts often do not tread, as it delves into problems that have no easy answers, displays scenes that are intricately woven, and complex themes ranging from nurture, empathy, and our responsibility to one another and to the planet.

The Flora and Fauna is a haiku of a play, deft and poetic in its exploration of a years-long relationship between two women. Playwright Alyson Mead balances trauma, joy and love in a far too rare genre for the American stage: the female friendship play.

As one respondent wrote, “There is power in the voice of the play, a strong expression of compassion, and effective craft.”

The deceptively simple structure offers modern audiences an opportunity to immerse themselves in the depth and complexity of these two characters and the journeys of their lives. The Flora and Fauna has also been recognized as a Princess Grace Award finalist, Henley-Rose Award winner, Bridge Initiative New Work winner, American Stage’s 21st Century Voices winner, among others.

Jason Grote’s plays have been widely produced and developed with, among others, ACT, Baltimore Centerstage, The Civilians, Clubbed Thumb, The Denver Center, Ensemble Studio Theater, The Foundry, HERE, The Lark, The Museum of Modern Art, New York Theater Workshop, The O’Neill National Playwrights' Conference, Playwrights Horizons, Portland Center Stage, Soho Rep, and the Sundance Theater Lab. He is an alumnus of New Dramatists, was the 2006 P73 Playwriting Fellow, was nominated for a 2013 Writers' Guild of America Award, and was the recipient of ACT's 2014 New Play Prize and was a 2019 Walter E. Dakin Fellow at the Sewanee Writers Conference. He is also a screenwriter and television writer whose work includes Mad Men, Hannibal, and Smash.

About the Department of Theatre: The University of Arkansas Department of Theatre in the University of Arkansas’ J. William Fulbright College of Arts and Sciences has been providing exciting and affordable live theatre for more than 60 years. The department combines a first-rate theatrical education full of hands-on experience with a wide selection of titles to challenge students and delight the community. The department offers the Bachelor of Arts degree in Theatre, a broad spectrum program in the context of a liberal arts education, and the Master of Fine Arts degree in six concentrations: Acting, Directing, Playwriting, Costume Design, Scene Design and Lighting Design. Classes at both undergraduate and graduate levels are focused on providing a strong, professional orientation to theatre performance and technology in conjunction with appropriate research-based coursework to address the required foundations in theatre history, dramatic literature and dramatic criticism.