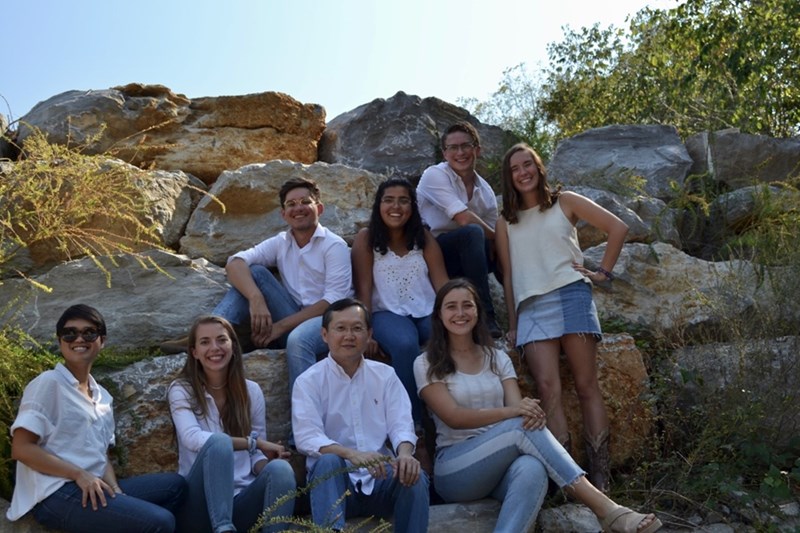 MARSHALL, Ark. – Members of the University of Arkansas clarinet studio traveled to Marshall to join the ranks of cloggers, fiddlers and yodelers at the Elton Britt Memorial Festival on Oct. 5. The festival was commissioned in memory of Elton Britt, who was born in Marshall and recorded over 60 country albums and was the first person to receive a Gold Record in country music history.

The U of A's clarinet octet performed pieces such as Claribel — original composition written for the medium, Shirim the Klezmer Rhapsody, and the University of Arkansas fight song. But the crowd favorite was Rocky Top, arranged by the studio's very own Manchusa Loungsangroong.

The octet then split into smaller ensembles. The Trio performed Mozart's Divertimento No. 3 for three basset horns (arranged for three B-flate clarinets). Two Quartets performed a folk-inspired contemporary piece by a Thai composer, Yos Vaneesorn, and famous rags by African American composer, Scott Joplin, born in Texarkana. The group felt honored to open the festival and enjoyed listening to the wide array of performers who followed.

"Playing at a country music festival was definitely an experience I will never forget," says senior Lily Fuentes. "It was great to be able to play pieces we worked so hard on for such a welcoming crowd."

The group also stopped to play at the Newton County Public Library, where many residents shared their own stories about having played an instrument and expressed interest in coming to Fayetteville to see the studio's final concert in December. Even the library's pet cat, Pepper, paused to appreciate the music offered by the ensemble.

These performances were a part of the Department of Music's Music75 project that has a mission of bringing music from the university to all 75 counties in Arkansas. The Department of Music hopes to accomplish this ambitious project by 2020, and clarinet professor Nophachai Cholthitchanta is already brainstorming where to take his players next.