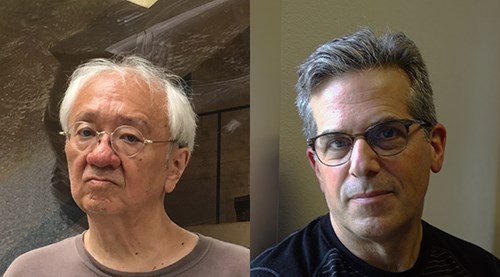 FAYETTEVILLE, Ark. – Acclaimed authors John Yau and Jonathan Lethem will be the  2019-20 McIlroy Family Visiting Professors in the Visual and Performing Arts at the University of Arkansas.

“We are thrilled to host John Yau and Jonathan Lethem on campus this fall,” said Gerry Snyder, executive director of the School of Art. “The school is dedicated to bringing in diverse experts who provide our students and the surrounding community with a broad range of arts expertise.”

Yau is an award-winning poet, art critic, and curator that has published over 50 books of poetry, fiction and art criticism. He will give a free public lecture at 5:30 p.m. Thursday, Sept. 5, in Hillside Auditorium sponsored by the School of Art.

He will also participate in the non-profit community-based Open Mouth Reading Series’ Harvest Poetry Reading at 6:30 p.m. Friday, Sept. 6, at the Fayetteville Public Library. Additional participating poets include Ross Gay, Geffrey Davis and Gwendolyn Ann Hill. Sponsors of the event include the School of Art, the Department of English and the University of Arkansas Press.

Lethem is an award-winning, genre-defying fiction and nonfiction writer who is the author of more than a dozen books and the recipient of a MacArthur Foundation Genius Grant.

As the son of the painter Richard Lethem and the late political activist Judith Lethem, Jonathan is an author who understands and has written about the various aspects of the artistic process. He will hold a free public lecture on Thursday, Oct. 3. Details will be announced at a later date.

The professorship, established in the university’s J. William Fulbright College of Arts and Sciences, supports the teaching and work of professional artists who impart highly specialized knowledge essential to students’ artistic, educational, and career enrichment and of value to the community at large. It was made possible through the philanthropy of Hayden and Mary Joe McIlroy and the Walton Family Charitable Support Foundation.

John Yau will be the first art critic and poet to speak in the School of Art’s lecture series. Yau writes for the respected art publication Hyperallergic and will share his experiences and the art of being a critic.

John Yau was born in Lynn, Massachusetts in 1950 to Chinese emigrants. He attended Bard College and earned an M.F.A. from Brooklyn College in 1978. His first book of poetry, Crossing Canal Street, was published in 1976. A noted art critic and curator, Yau has also published many works of art criticism and artists’ books.

Yau has received many honors and awards for his work including a New York Foundation for the Arts Award, the Jerome Shestack Award, and the Lavan Award from the Academy of American Poets. He has received fellowships from the National Endowment for the Arts, the Ingram-Merrill Foundation, and the Guggenheim Foundation, and was named a Chevalier in the Order of Arts and Letters by France. Since 2004 he has been the arts editor of the Brooklyn Rail. He teaches at the Mason Gross School of the Arts and Rutgers University and lives in New York City.

Jonathan Lethem’s fiction weaves the conventions of noirs, westerns, science fiction and graphic novels into something both evocative and wholly original. He is the author of more than a dozen books — including the critically praised novels Motherless Brooklyn and The Fortress of Solitude — and is the winner of a MacArthur Foundation “Genius” grant. Lethem’s nonfiction, which includes essays on writing and music, is as compelling and observant as his fiction.

In the spring of 2010, Lethem was awarded an honorary doctorate by the Pratt Institute and became the second Roy E. Disney Chair in Creative Writing at Pomona College, succeeding David Foster Wallace. Lethem’s writing has appeared in The New Yorker, Harper’s, Rolling Stone, Esquire, The New York Times, The Paris Review, The Believer, Granta, and McSweeney’s. He also served as a guest director at the 45th annual Telluride Film Festival. He is at work on a new novel, slated for release in late 2020.