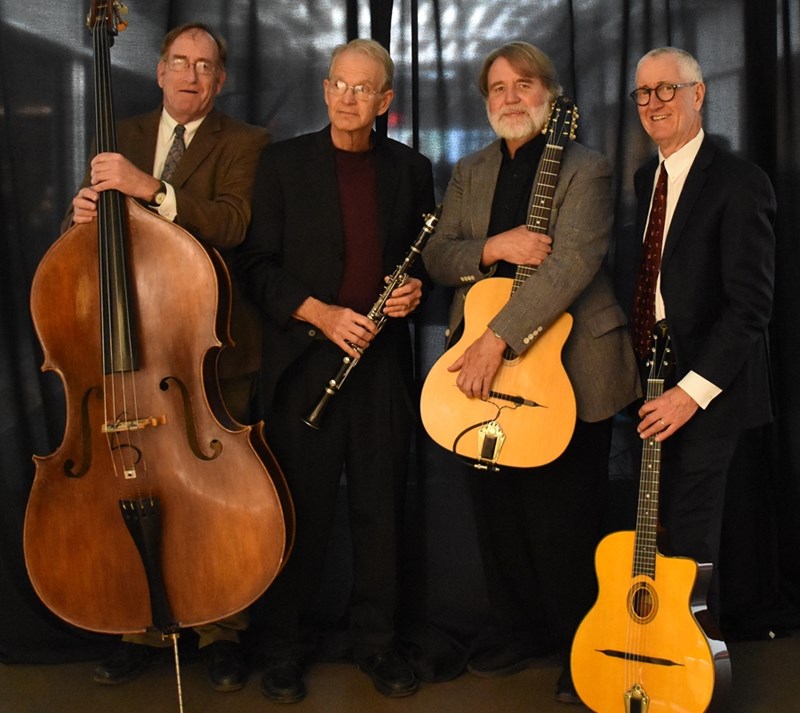 Join in for a lively performance by Hogtown Hot Club from 7 to 9 p.m. on Thursday, July 18, at the David and Barbara Pryor Center for Arkansas Oral and Visual History in the J. William Fulbright College of Arts and Sciences.

The Pryor Center is located at 1 East Center Street, Suite 120, and parking is available on the Fayetteville Square. The event is free and open to the public.

Hogtown Hot Club was brought together in 2010 by the members' love of swing music from the '30s and '40s. Hogtown was inspired by legendary Gypsy guitarist Django Reinhardt and his group the "Hot Club de France" whose interpretations of the American jazz trumpeter Louis Armstrong morphed into what is now called "Gypsy Jazz."

The group consists of four musicians who have been part of Northwest Arkansas' music scene collectively for over 40 years while playing with numerous ensembles of different styles.

Prior to his recent retirement, Ed Nicholson was the senior director of community relations at Tyson Foods and was responsible for leading the company's corporate social responsibility efforts, including focus areas of hunger and disaster relief. In his earlier years, Nicholson toured with various country rock musicians and is still one of the hardest working musicians in our area.

Jim Jernigan worked as a corporate pilot for years and still builds and flies his own planes. Jernigan is also a gifted clarinetist who has performed jazz for years and has also acted in a number of productions in Northwest Arkansas.

Jim Greeson was a professor of music at the U of A for 37 years where he taught guitar and music composition and led the UA jazz ensemble. In 2012 Greeson was inducted into the Arkansas Jazz Hall of Fame.

Bassist Garrett Jones is a graduate of the U of A music department and is a remarkably versatile bassist who has traveled around the country performing with The Vine Brothers and the Blues Brothers touring ensemble.

Collectively Hogtown Hot Club evokes the vigor of Bourbon Street jazz together with the romanticism of Paris cafes and the sounds of Jazz Manouche!