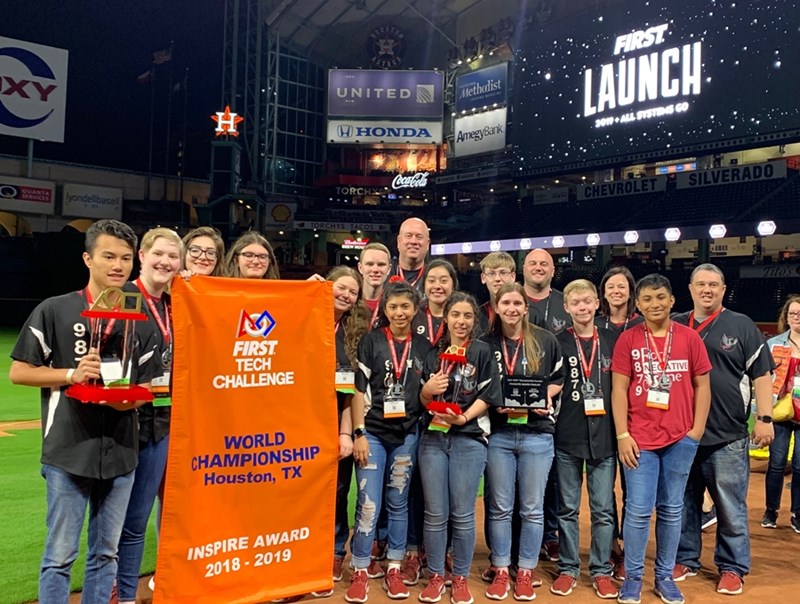 A Springdale robotics team coached by University of Arkansas engineering faculty members has taken one of the top spots in a worldwide competition.

Root Negative One, the competitive robotics team at the Don Tyson School of Innovation in Springdale, received the Inspire Award, the top judged award at the 2018-2019 FIRST Tech Challenge World Championship. The University of Arkansas College of Engineering is a significant supporter of the team, which is coached by professor Richard Cassady and associate professor Chase Rainwater from the Department of Industrial Engineering.

The Inspire Award recognizes Root Negative One as one of the top two teams among the more than 7,000 FIRST Tech Challenge teams worldwide that competed in the 2018-2019 season.

John English, dean of the College of Engineering, said, "Accomplishments at the global level speak to the caliber of robotics program that Drs. Cassady and Rainwater have developed. The University of Arkansas College of Engineering is proud to be a continuing supporter of this initiative."

The award was announced in front of thousands at Minute Maid Park in a ceremony seen around the world via the FIRSTinspires Twitch channel. Team members were recognized for being a strong ambassador for FIRST programs and a role model FIRST team.

The honor is given to the team that is a top contender for many other judged awards and is a gracious competitor on and off the field. The recipient shares their experiences, enthusiasm and knowledge with other teams, sponsors and their community and has demonstrated success in performing the task of designing and building a robot.

Cassady said the award was the culmination of years of effort, and the team plans to use the momentum to push for greater access to similar programs across Arkansas.

"Since creating this team in 2015, our goal was to build a world-class, high-school robotics program. Now that we have achieved our highest competitive goal, we will advocate for the creation of more opportunities like this for students across Arkansas, and we will share what we have learned to help other teams achieve their goals," he said.

Formed in 2015-2016, Root Negative One received the Inspire Award at the 2015-2016 Oklahoma Championship, the 2017-2018 Arkansas Championship, and the 2018-2019 Alabama Championship. At the 2017-2018 FIRST Tech Challenge World Championship, also held in Houston, they were one of four finalists for the Inspire Award. In an effort to be a world-class program, Root Negative One engages not only in robotics, but also in community outreach and team building. In addition to completing their own training activities, the team shares experiences, challenges, and lessons learned with other teams, some from different states and countries.

"The students on Root Negative One have demonstrated engineering excellence at the highest level," Rainwater said. "Mentoring this group is extremely rewarding and makes me confident in the next generation of STEM leaders."

To learn more about the FIRST program visit www.firstinspires.org or contact Root Negative One at ftc9879@gmail.com.