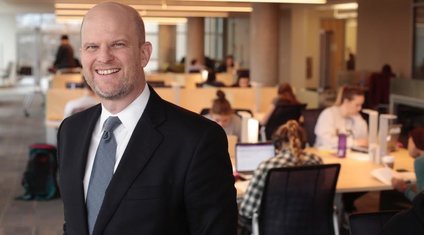 FAYETTEVILLE, Ark. – Dennis T. Clark, associate university librarian for research, learning, and spaces at the University of Virginia, has been named dean of the University of Arkansas Libraries. He will begin his duties Aug. 1.

"I'm thrilled to be appointed as dean of libraries at the University of Arkansas,” said Clark. “This is a terrific moment to join faculty, staff and students in reimagining what a library can be for the flagship, land-grant university in Arkansas. It's truly an honor to have been appointed, and I look forward to collaborating with the entire campus to support the mission of the university."

“Dennis has the unique mix of experiences and expertise needed to ensure our libraries continue to thrive, grow and adapt to meet the current and future needs of our campus and researchers around the globe,” said Jim Coleman, provost and executive vice chancellor for academic affairs.

Clark was involved in designing the renovation of the University of Virginia’s historic Alderman Library and was an Association of Research Libraries Leadership Fellow for 2016-2017.

“Dennis Clark arrives to the University of Arkansas with an exceptional background in university library administration and with an energetic perspective on the future of university libraries,” said Peter MacKeith, dean of the Fay Jones School of Architecture and Design and chair of the university search committee. “The committee was impressed by his insights, his responsiveness, and his enthusiasm for the university and its academic libraries in a critical period of growth and transformation. I look forward to working with him as a colleague dean to address the priorities of the university and the state.”

Carolyn Allen, who has served as dean of University Libraries since 2000, will continue her work at the U of A as Special Assistant to the Provost.

Prior to his position at the University of Virginia, Clark served as an associate university librarian and associate professor at Virginia Commonwealth University in Richmond, where he was deeply involved in the programing, design and implementation of a $50 million library renovation and addition. He led the effort to reimagine the library services model, expanded the reach of digital media and special collections, and invigorated outreach efforts to academic disciplines. He was a member of the library leadership team when VCU Libraries became the first U.S. library in 15 years to be offered membership in the Association of Research Libraries.

Before his time at Virginia Commonwealth, Clark managed public services at Texas A&M University Libraries, where he earned tenure in 2010. He has extensive experience as a music librarian and served as director of the Wilson Music Library and lecturer of music bibliography at Vanderbilt University. In that role, he co-founded its Global Music Archive, a streaming digital collection of traditional music, and conducted fieldwork in Uganda.

Clark currently serves on the editorial board of Public Services Quarterly and has published the evolving intersections of library services and technology in Library Review, Library Hi-Tech, Performance Measurement and Metrics, Collection Building, and the Journal of Library Administration. Clark holds a master’s degree in information and library science from the University of Alabama and a bachelor’s degree in music from Samford University.

About the University Libraries: Located at the heart of campus, David W. Mullins Library is the University’s main research library. Branch libraries include the Robert A. and Vivian Young Law Library, the Fine Arts Library, the Physics Library, and the Chemistry and Biochemistry Library. The Libraries provide access to more than 2.1 million volumes and more than 56,000 journals, and offer individual and group research help, study spaces, computer labs with printing and scanning, interlibrary loan and delivery services, and cultural exhibits and events. The Libraries’ Special Collections Department acquires, preserves, and provides access to materials on Arkansas and the region, its customs and people, and its cultural, physical, and political climate. Visit the Libraries’ web page at libraries.uark.edu to learn more about services and collections.