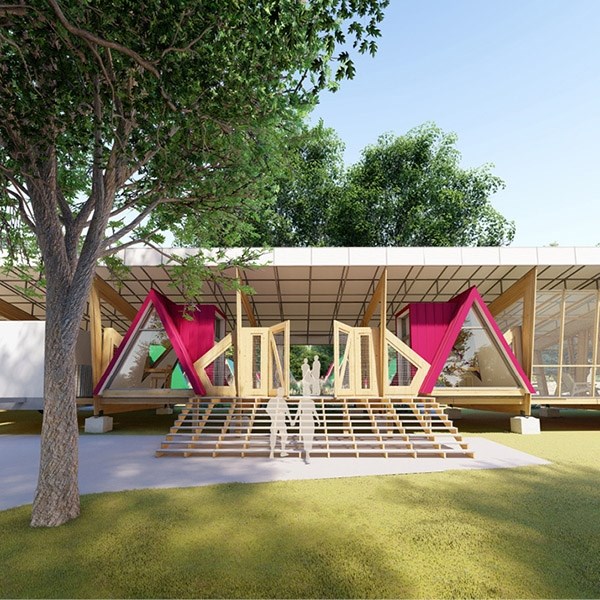 Rendering courtesy of U of A Community Design Center

A rendering of the design for the New Beginnings Homeless Transition Village in Fayetteville.

FAYETTEVILLE, Ark. – The University of Arkansas Community Design Center and its collaborators have been recognized by three prestigious awards programs for a project addressing social and ecological sustainability in a homeless transition village in Fayetteville.

"New Beginnings Homeless Transition Village: A Permittable Settlement Pattern" was named a 2019 Green GOOD DESIGN by The European Centre for Architecture Art Design and Urban Studies and The Chicago Athenaeum: Museum of Architecture and Design. The Green GOOD DESIGN program identifies the world's most important examples of sustainable design and highlights the global companies working toward sustainability.

The project received recognition in The PLAN Awards 2019, an international design awards program sponsored by The Plan magazine. The project was named a finalist in the Urban Planning Future category, along with two other Community Design Center projects. Another of the center's projects was named winner of the Landscape Future category.

"New Beginnings is both a shelter-first solution for replacing and upgrading a tent city in Fayetteville and a prototype for codifying best design practices for application in other communities," said Stephen Luoni, director of the Community Design Center and Steven L. Anderson Chair in Architecture and Urban Studies in the Fay Jones School of Architecture and Design. The center is an outreach program of the Fay Jones School.

"The financialization of urban housing where housing has essentially become an investment tool has created multi-dimensional social problems, including the disappearance of entire classes of housing that serve low-income and extreme low-income populations," he said. "Advanced economies are seeing the rise of the informal sector in providing solutions to problems unaddressed by markets and the regulatory sector."

The New Beginnings prototype is distinguished by its combined use of aesthetic, technological and social practices, Luoni said. The result is a cost-effective intervention that reconciles informal and formal sectors to reverse the rising rate of homelessness.

"The project reconciles gaps between informal building practices and formal regulations, making interim solutions ecologically sustainable and able to be permitted under city codes," he said.

New Beginnings was commissioned by Serve Northwest Arkansas, a regional group working to address homelessness and poverty through a shelter-first approach. Kevin Fitzpatrick, University Professor and Jones Chair in Community in the J. William Fulbright College of Arts and Sciences, served as client and programing consultant for the project.

Twenty single homeless people will live in the village for six-month terms, receiving both shelter and comprehensive social services. The goal is to support them in stabilizing their lives and transitioning to permanent housing.

The project was granted a five-year conditional approval by the city of Fayetteville. A formal groundbreaking on the site of a former tent city took place April 12. The village is expected to be operational by wintertime.

By aggregating shared services under one roof, the innovative design sidesteps normative zoning and building code requirements, Luoni said. The project relies on partnership with a host organization, in this case Serve Northwest Arkansas, and with a city to codify such workarounds.

The components of the village are designed for disassembly and reuse, avoiding the discard of material in a landfill, he said. The sleeping units and community porch are pre-fabricated off site, and they can be packed and transported to create a homeless transitional village in another area. The A-frame sleeping units can be resold for more than twice their original cost, creating a financial benefit, as well.

"We're solving for two important sustainable criteria," Luoni said. "The design is based on a progressive material life cycle, where project components are repurposed, and a social life cycle, where we're elevating social capital by encouraging self-governance, independence and networking among residents.

"We're using design to help people recover a more stable livelihood, both in terms of achieving more stable shelter and thriving through social networks and support," he said.

The Community Design Center project joins a handful of similar initiatives in states that include Oregon, Washington, Texas and Wisconsin. The ultimate goal is to enable legislation that would allow cities and non-governmental organizations to enact these "tiny home communities" without a lengthy permitting process.

With about 3 million people homeless across the United States each year - a number equivalent to Arkansas' total current population - it makes sense to consider the informal as an alternative, Luoni said.

"The uniqueness of the project is actually using the informal - the sector that's pushed aside and ignored - to hopefully change the formal," he said.

The New Beginnings project will be recognized at the 50th EDRA conference in Brooklyn, New York, on May 23. This is the Community Design Center's sixth award from the association.

The project will be published in the GOOD DESIGN Yearbook for 2018-2019 and exhibited in Europe, the United States and South America. This is the fourth time the center has won a Green GOOD DESIGN Award.

The project will also be featured in an upcoming issue of The Plan, an international magazine, along with the other Community Design Center projects recognized with PLAN awards.