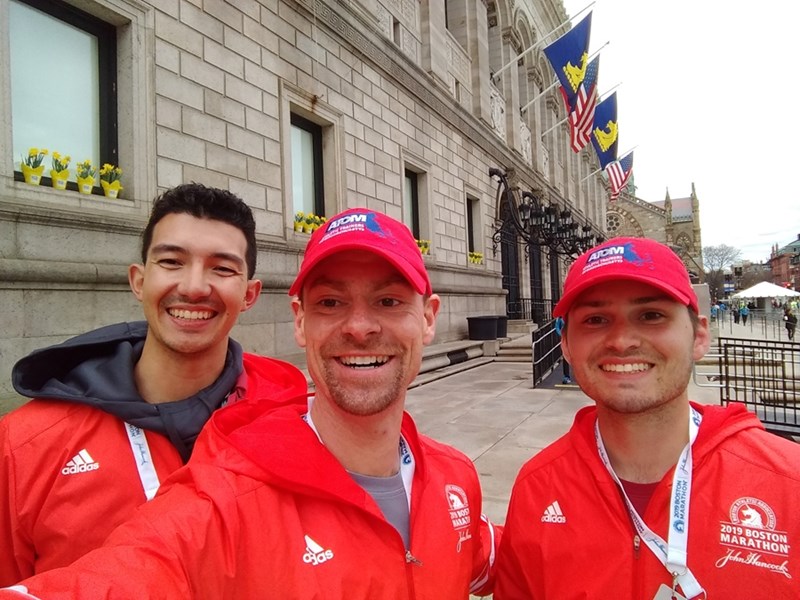 Brendon McDermott, Mitchell Skinner and Matthew McCarthy after a long day of treating runners and saving lives at the Boston Marathon

Brendon McDermott, associate professor in health, human performance and recreation at the University of Arkansas, attended the Boston Marathon earlier this month as part of the race's medical team.

This was his eighth year to assist patients in the marathon's medical tents. There were over 30,000 runners this year.

"Having run the race four times and enjoyed the city and the vibe on that weekend, it's great to help out," he said. "And this year, for the first time, we had students working as part of the medical team for the race."

The two students, Matthew McCarthy and Mitchell Skinner, assisted the medical team as wheelchair sweep personnel. They transported patients just past the finish line via wheelchair into the medical tent for triage and treatment, McDermott said.

The students were part of an enormous medical team who typically help approximately 2,200 annually. This year, students aided patients with a variety of medical issues, including everything from minor gastrointestinal conditions to muscle cramps to potential exertional heat stroke, dehydration or hyponatremia.

They said not only was it a great clinical opportunity to enhance their skills in mass triage, but to work with other health professionals from across the country including other ATs, PTs, EMTs, Nurses, PAs, and physicians. They both agreed they'd love to serve the Boston community at the race for years to come.

McCarthy added that being assigned to the finish line was fortunate because he was able to witness one of his favorite parts of athletic training.

"One of the greatest privileges of my career is to see athletes reach their goals and dreams. This position allowed me to interact with athletes who were fist pumping, embracing others, crying, and ultimately expressing relief," he said. "On the flip side, I interacted with those suffering from excessive vomiting, unable to walk, and some being carried unconscious. I was counted on to provide swift, but safe transportation of the athletes to our onsite medical facility. I am proud to have served in this role, and it was a privilege I will never forget."

Skinner was assigned to the secondary medical tent near the family and friends' reunion area.

"It was a humbling experience to have witnessed the accomplishment and dedication of so many athletes," he said. "While witnessing the achievements of others, I was also vigilant in my duties to transport some of those athletes for immediate medical care.  I am very proud to have represented my university and profession at a world event, and will remember this Boston Marathon from years to come."

McDermott is pleased the students found the experience so educational and uplifting.

For the past five years McDermott has been in the heat deck treating exertional heat stroke patients.

"This year, we treated more than 20 exertional heat stroke patients," he said. "Exertional heat stroke, without proper recognition and treatment, is fatal. Despite body temperatures up to, and in some cases beyond 109 degrees, all of our patients survive and are typically in good condition when they leave the tent."

McDermott also oversaw a research study at the marathon this year. He had help from U of A doctoral student Whitley Atkins and Katie Buria, a master of athletic training student. The three conducted a physiological study evaluating kidney stress, gut permeability and gastrointestinal symptoms during and following the run. The study is in conjunction with the University of Kansas and Weber State University.

They were able to collect data on about 75 participants just before and following the 26.2 mile run, as well as the day following the run.

Two days before the race, McDermott presented a workshop to about 130 medical professionals at the International Institute of Race Medicine meeting. The workshop focused on properly recognizing and treating exertional heat stroke.

Support for the trip was provided by the Office of the Provost and Office of Faculty Development and Enhancement.