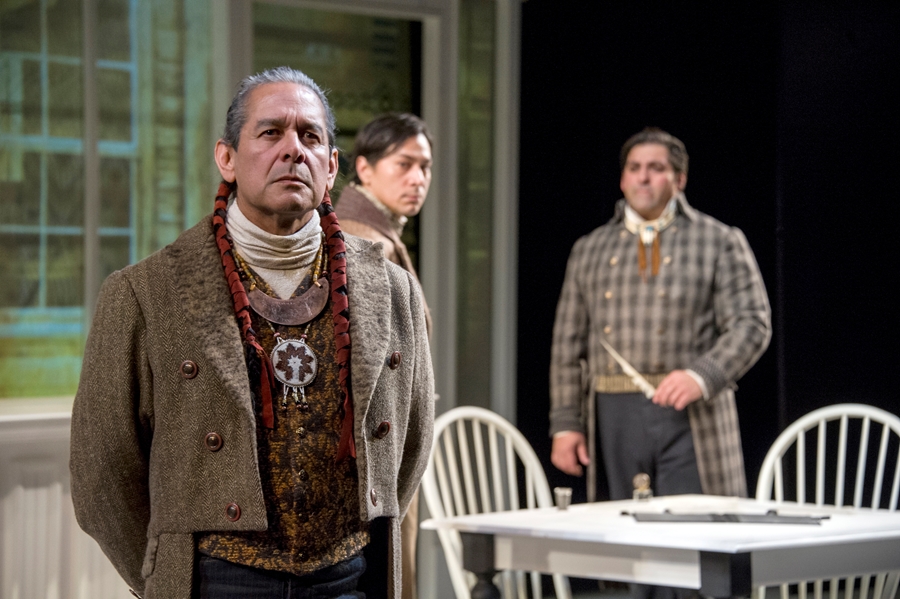 A scene from the Arena Stage Washington, D.C. production of Sovereignty

FAYETTEVILLE, Ark. – An influential Cherokee family’s legacy with ties to Fayetteville’s past and present will be featured during “A View from the Ridge: An Evening with Playwright and Ridge Descendant Mary Kathryn Nagle.”

The event will take place at 7 p.m. Monday, Feb. 18, in the University of Arkansas’ Jim and Joyce Faulkner Performing Arts Center with a reception to follow. The event and reception are both free and open to the public.

In coordination with TheatreSquared and Crystal Bridges Museum of American Art, “A View from the Ridge,” will feature readings from Nagle’s play, Sovereignty, which wrestles with the Ridge family’s legal legacy and how the broken treaties of the past reverberate in the Cherokee Nation today.

In Sovereignty, Sarah Ridge Polson, a young Cherokee lawyer fighting to restore her nation’s jurisdiction, must confront the ever-present ghosts of her grandfathers.

With shadows stretching from the 1830s Cherokee Nation (now present-day Georgia) through Andrew Jackson’s Oval Office to the Cherokee Nation in present-day Oklahoma, Sovereignty asks how high the flames of anger can rise before they ultimately consume the truth.

Community and U of A faculty experts will also provide further perspective on the themes the play explores and how the family’s legacy lives on in Fayetteville in the objects and ideas that survive.

Amy Herzberg, distinguished professor and head of the performance area in the U of A's Department of Theatre, will direct the reading.

The play is receiving national attention and praise across the United States, including articles in The New York Times, The Washington Post and American Theatre magazine.

This event is part of a series of events centered on modern-day playwright Mary Kathryn Nagle, her ancestor John Ridge and his influential Cherokee family’s legacy.

Partners and sponsors for these events include Crystal Bridges Museum of American Art, TheatreSquared, the Northwest Arkansas Center for Sexual Assault, the U of A Chancellor’s Innovation and Collaboration Grant, University Libraries’ Special Collections and Mullins Library, and the J. William Fulbright College of Arts and Sciences’ Indigenous Studies Program, Humanities Program and Department of Theatre.

About John Ridge: John Ridge signed the bitterly divisive Treaty of New Echota in 1835, which removed the Cherokees from their land in the eastern United States. While many view Ridge and the other Ridge-Watie family signers as traitors, others see them as dissenting patriots who were willing to sacrifice their own lives to preserve the Cherokee Nation – having no idea of the atrocity that was to come through the Trail of Tears. After Ridge was killed in the Indian Territory, his widow, Sarah Bird Northrup Ridge, their five children and a teacher, Sophia Sawyer, moved to Fayetteville in 1839. Their home, The Ridge House, located just off the downtown Fayetteville Square, is the oldest house still standing in Fayetteville.

About Mary Kathryn Nagle: Playwright Mary Kathryn Nagle is an enrolled citizen of the Cherokee Nation. She currently serves as the executive director of the Yale Indigenous Performing Arts Program. She is also a partner at Pipestem Law P.C. in Tulsa, where she works to protect tribal sovereignty and the inherent right of Indian Nations to protect their women and children from domestic violence and sexual assault. Her play Sovereignty premiered at Arena Stage in Washington, D.C., in the spring of 2018.

About the University of Arkansas: The University of Arkansas provides an internationally competitive education for undergraduate and graduate students in more than 200 academic programs. The university contributes new knowledge, economic development, basic and applied research, and creative activity while also providing service to academic and professional disciplines.