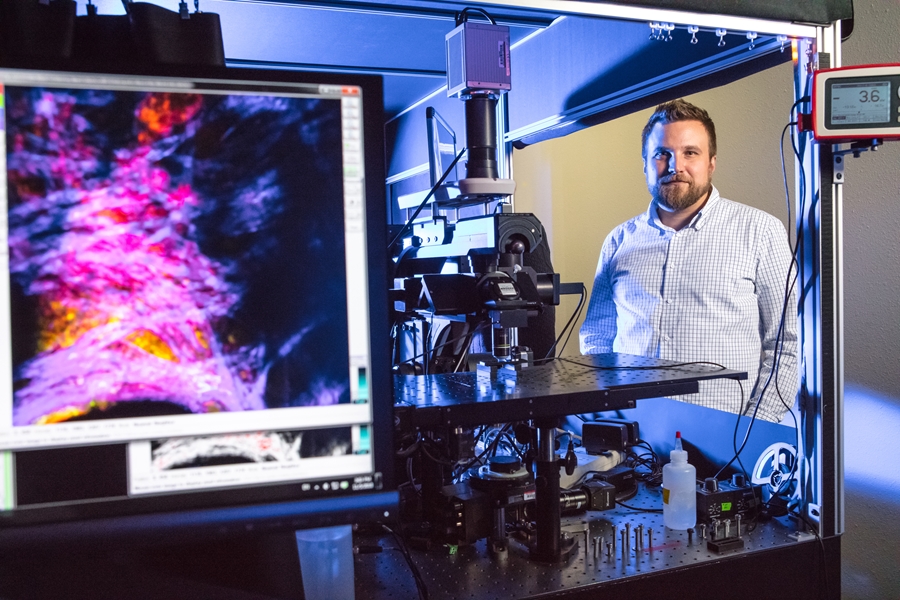 Kyle Quinn in his lab at the University of Arkansas.

FAYETTEVILLE, Ark. – Researchers at the University of Arkansas have developed a new approach to diagnosing and monitoring chronic skin wounds, such as diabetic foot ulcers and pressure wounds.

Current clinical approaches for diagnosing and monitoring these wounds do not provide critical diagnostic information about how they develop or why they do not heal.

Quinn and Jones used a process called label-free multiphoton microscopy to view tissue in three dimensions at the cellular level and generate 3D maps of wound metabolism. Label-free means the tissue was not artificially labeled with a fluorescent molecule. Multiphoton microscopy can facilitate measurements of naturally occuring cell and tissue autofluorescence, which is the emission of light by molecules naturally present in cells and tissue when those molecules have absorbed light.

In this study, autofluorescence imaging of two molecules – nicotinamide adenine dinucleotide (NADH) and flavin adenine dinucleotide (FAD) – were used to monitor cell metabolism. This was accomplished through a measurement called an optical redox ratio, which quantifies the relative concentrations of NADH and FAD. The researchers monitored wound metabolism in mice over a period of 10 days.

“To our knowledge, this is the first study showing changes in the optical redox ratio of tissue within live animals imaged through repeated sessions,” Quinn said. “We consider this a critical step in demonstrating the diagnostic potential of multiphoton microscopy for clinical wound care.”

Complications associated with diabetes are a common cause of chronic wounds.  For this reason, Quinn and Jones’s study included diabetic mice, in addition to healthy, control mice.

The researchers observed differences between diabetic and control mice during the rebuilding of wound tissue. Changes in the optical redox ratio and NADH fluorescence among the diabetic mice indicated that cells remained at the wound edge, growing and dividing, rather than migrating over the wound to restore the skin’s protective barrier function.

“The ability of multiphoton microscopy to non-invasively collect structural and metabolic data suggests that it might have broader applications for wound care and dermatology,” said Quinn. “Providing quantitative metrics of cell function and wound composition has potential to supplement current standard of care and guide treatment options.”

The study was published in Communications Biology.