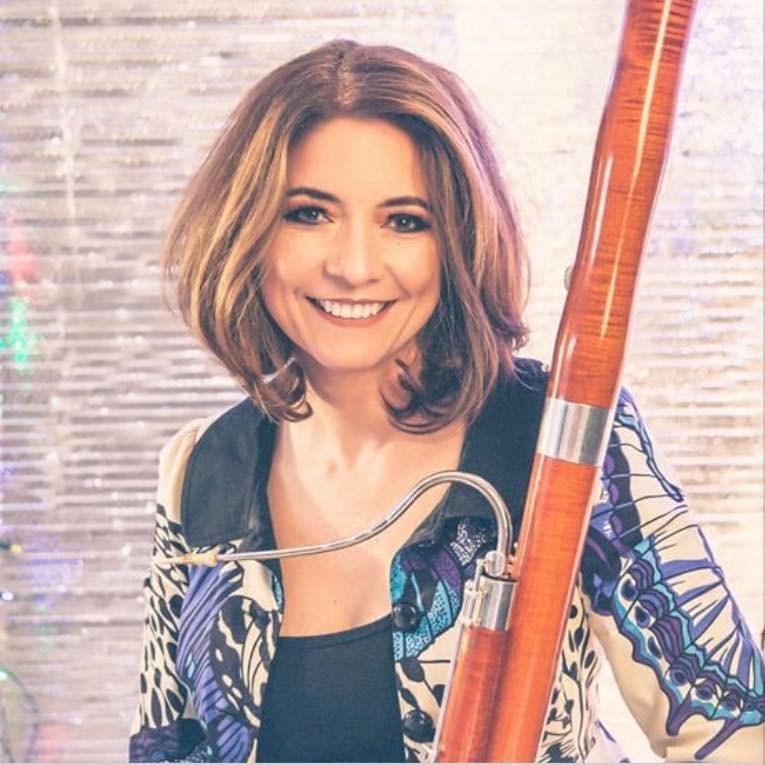 Lia Uribe, assistant professor of bassoon at the University of Arkansas Department of Music, will be performing the world premiere of Noam Faingold's bassoon concerto "Impressions of Manuela Saenz" on Sunday, Oct. 7, in collaboration with the Fort Bend Symphony Orchestra led by conductor Dominique Røyem at the Stafford Centre in Stafford, Texas. Also on the program are works from Johannes Brahms, Bedřich Smetana, and Antonín Dvořák.

Fort Bend Symphony Orchestra's season-opening concert's theme is “Finding Home: Impressions on where we belong.” In the words of conductor Røyem, “‘home’ means something different to each of us. This concert challenges us to look back at where we've come to where we are. Finding our roots as well as our purpose. Finding an end to one thing and a start to something new.”

Uribe, Faingold, and Røyem met in the Mid-America Arts Alliance “Artist INC” artist mentorship program in which the three of them hold the role of facilitators.

“Uribe gave me a list of interesting South American historical figures for a piece for National Hispanic Heritage Month, and Sáenz’s story jumped out at me immediately,” says composer Noam Faingold. ”I was intrigued by the tragic life of this revolutionary figure who fought for independence for her country Gran Colombia (now split into Colombia, Venezuela, Ecuador, Peru, and other countries) from the Spanish in the early 1800s. Even though Sáenz was a military leader, she was only granted respect posthumously, receiving the rank of General by the Ecuadorian government in 2007, and a Venezuelan state funeral in 2010.”

This concerto in four movements explores Sáenz’s life, external forces controlling her destiny, the past and present tragedy of her under-appreciation, and her bravery.

Uribe maintains an active career as a chamber musician, orchestral player, and artist-teacher. Her international work includes venues and festivals in Colombia, Canada, Spain, Costa Rica, Finland, Germany, Ecuador, Greece, Puerto Rico, Japan, as well as multiple venues in the United States. Dr. Uribe performs and tours on regular basis with the Lyrique Quintette, woodwind quintet in residence at the University of Arkansas. Her research interest is centered on Latin-American and Latinx music and composers, in addition to inclusiveness and diversity in the arts. An advocate for new music, Lia Uribe has premiered and commissioned several new works for the bassoon. Uribe recently joined a consortium commission for a new concerto for bassoon and orchestral winds/percussion by Nico Muhly, that will be premiered with the University of Arkansas Wind Ensemble conducted by Chris Knighten in 2019.

Faingold is a composer, lecturer, curator, and performer whose music has been described as “…lyrical…,” “…exhilarating…,” and “…a tour-de-force…” by sources as varied as The New York Times, Anoushka Shankar for The BBC, Downbeat Magazine, and others. Commissions include TEDx, International Double Reed Society, and conductor Andrés Franco and Tulsa Signature Symphony. Performance highlights include New York Philharmonic oboist Rob Botti, Pacific Symphony concertmaster Dennis Kim, the Aspen festival, orchestras and ensembles in London, Paris, New York City, Boston, Finland, and Sweden, and working closely with Signature Symphony and the family of 20th century poet Yevgeny Yevtushenko in The Defiant Poet: An Elegy for Yevgeny Yevtushenko. Faingold currently serves on the music faculties of the University of Tulsa and Tulsa Community College, is the director of the Barthelmes Conservatory college preparatory program at the bART Center for Music, and directs the composition programs at TCC, the bART, and TU’s summer Composition Seminar.

Røyem is the music director of the Fort Bend Symphony Orchestra. An active guest conductor, she has worked with ensembles such as the Ukrainian State Orchestra, Plevin Philharmonic, Galveston Symphony, Moores Opera Center, Sugarland Opera, HBU Opera Theatre, and the Houston Civic Orchestra. She was the resident conductor for Bayou City Concert Musicals, and music director for Houston Grand Opera’s Opera to Go! during the 2012-13 and 2013-14 seasons, and the Conducting Fellow for the Allentown Symphony Orchestra’s 2012-13 season. She serves on the National Board of the Conductors Guild. Røyem currently lectures at the Women’s Institute of Houston.