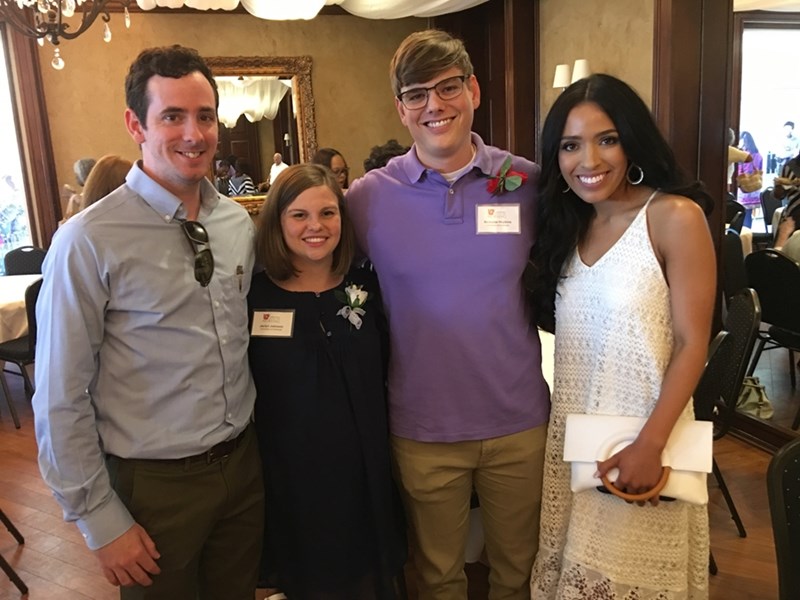 Jaclyn Johnson and Nick Hopkins, center, are pictured with their spouses, Jordan Johnson and Madison Hopkins.

Two nurses who work as hourly clinical instructors for the Eleanor Mann School of Nursing at the University of Arkansas were named this summer to the 40 Nurse Leaders Under 40 list by the Arkansas Center for Nursing.

Nick Hopkins and Jaclyn Johnson were honored at a recognition event, where they received pins and certificates. Both are U of A graduates of the nursing school.

The mission of the Arkansas Center for Nursing, Inc. is to promote a culture of health for the citizens of Arkansas by advancing nursing education, practice, leadership and workforce development. The 40 Nurse Leaders Under 40 program is designed to recognize nurses who have shown exemplar dedication to the nursing profession. They are acknowledged as community outreach servants and show continued promise to grow in leadership and the advancement of the nursing profession.

Hopkins also has worked at Advanced Orthopaedic Specialists for the past two years and previously worked in the emergency room and the progressive care unit at Physicians Specialty Hospital.

He said nursing is a profession that many people go into, not because they want awards or to be recognized, but because they care about helping people.

"So, to be recognized as one of the top 40 nurse leaders under 40 in Arkansas really meant a lot," Hopkins said. "I'm still a relatively new nurse so most of the students that I had in clinicals were just a few years younger than me and some were even older than me. I worked hard to lead by example for all of my students and show them that no matter how many years you've been a nurse you can be a leader.

Nursing students and graduates are aware of the nursing shortage, he said.

"As the baby boomer generation retires, it makes way for this younger generation of nurses to become the new leaders of nursing," Hopkins said. "Receiving this award motivates me to encourage new nurses and nursing students to not wait for leadership opportunities, but to seek them out and become a leader."

Among Hopkins' accomplishments and service considered for the recognition:

Johnson earned a Bachelor of Science in Nursing from the U of A in 2013 and a master's degree in nursing education from Western Governors University in Salt Lake City, Utah, in 2017. She has been a clinical instructor at the U of A for two years and currently teaches first-semester nursing students.

"Several of the faculty members were my instructors when I was in nursing school and they have been my constant inspiration in pushing me to be a valuable nurse and piece of my community," Johnson said. "So, to be nominated for this award by the same nurses that I have looked up to makes me feel like an amateur songwriter who was just handed a Grammy by Taylor Swift. This award is such an honor and an affirmation for what I want to do with my career; I want to be a nurse leader and improve the health and well-being of our state by investing in nursing students."

Nurses work on the front lines in an incredibly challenging and demanding field, she said. "I've found that my personal passion is being a cheerleader and supporter of these future nurses. If nurses feel supported and worthy of investment on the front end of their career, they will be much more likely to find satisfaction in their career choice and choose to stay on that path. And with an aging population, a whole generation of nurses retiring, and an increase in chronic disease-care needs, the country needs to retain every nurse possible."

Among Johnson's accomplishments and service considered for the recognition: