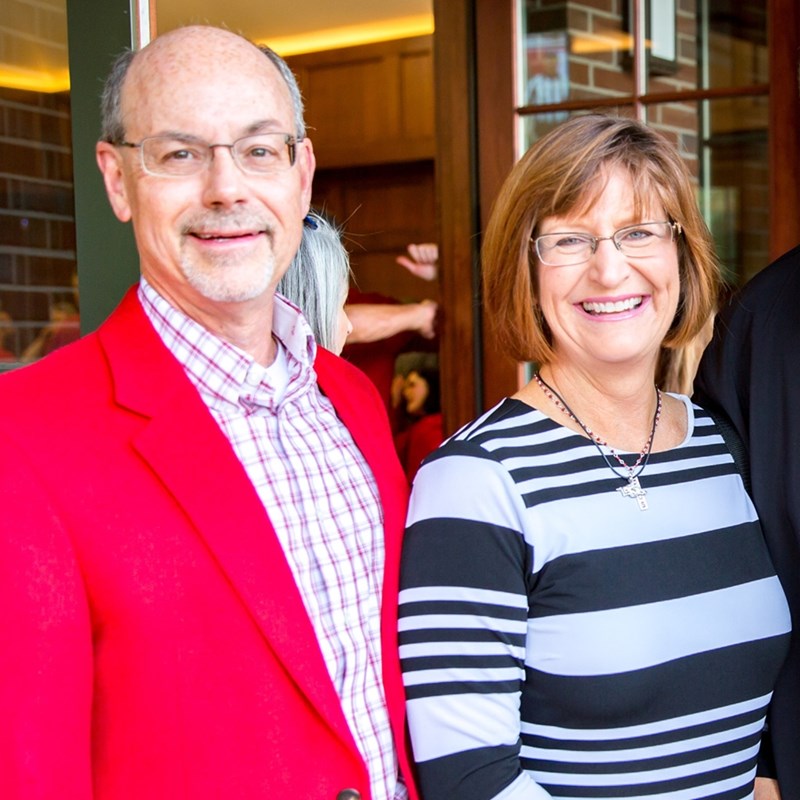 University of Arkansas System President Don Bobbitt and his wife, Susan, have made a $150,000 planned gift to the J. William Fulbright College of Arts and Sciences at the U of A.

FAYETTEVILLE, Ark. – University of Arkansas System President Don Bobbitt and his wife, Susan, have committed a $150,000 planned gift to the Bobbitt Family Fund in Chemistry and Theatre at the University of Arkansas. Their gift will support students in the J. William Fulbright College of Arts and Sciences, as well as Campaign Arkansas, the university’s $1.25 billion capital campaign.

The Bobbitts created the Donald R. and Susan M. Bobbitt Award in Chemistry and Drama in 2002 during the Campaign for the Twenty-First Century. In 2015, it was renamed the Bobbitt Family Fund in Chemistry and Theatre but retained its original purpose of enhancing both departments.

“We wanted it to be a fund that would help the departments of chemistry and theatre recruit graduate students,” Don Bobbitt said.

“The gift from Don and Susan Bobbitt speaks volumes about their commitment to higher education,” said Chancellor Joe Steinmetz. “They truly believe in leading by example, and the University of Arkansas is thrilled that they have chosen to support the recruitment of graduate students while enhancing student success, two of our top priorities. Don and Susan both received scholarship support as college students, so they know how meaningful a gift like this can be to future scholarship recipients.”

The departmental designations of the fund reflect Don and Susan Bobbitt’s backgrounds in chemistry and theatre, respectively. Don Bobbitt earned a Bachelor of Science in chemistry from the U of A and a doctorate in analytical chemistry from Iowa State University. He taught chemistry at the U of A for 17 years before being named interim dean of the J. William Fulbright College of Arts and Sciences. He became dean of Fulbright College the following year, in 2003.

Susan Bobbitt graduated from Iowa State University with a bachelor’s degree in apparel design and pattern making after attending the U of A for two years. Upon returning to Fayetteville, she volunteered in the U of A’s Theatre Department costume shop and later worked as an hourly employee. She was then hired as a seamstress and was the costume shop manager for seven years.

“We are so grateful for the Bobbitts’ ongoing support and tremendous dedication to providing more educational opportunities for our students,” said Todd Shields, dean of Fulbright College. “They know first-hand the difference a scholarship like this can make for a student, and how much it means.”

The Bobbitts chose to make their contribution through a planned gift and increase the endowment of their existing fund.

“Planned giving is a fairly painless way to do something substantial,” Don Bobbitt said, noting the pair contributes to their fund annually as well. “Susan and I both believe in permanence. We prefer permanent change for the better. We’re very deliberate in our actions, and we know the benefits from this fund will affect the U of A in perpetuity.”

Students have already benefited from the Bobbitts’ fund since it was started, and the couple regularly hears from the beneficiaries.

“We’ve received letters from students who have received the award, and it’s humbling,” Susan Bobbitt said. “I received a similar scholarship when I was at the U of A during my first two years of college. It’s a rewarding feeling.”

Don Bobbitt also received scholarship support as a student at the U of A, and he recalls meeting the family of one of his donors while he was dean of Fulbright College. The donor had saved his handwritten thank you note from years earlier.

Bobbitt and his wife are both first-generation college graduates, and their three sons share six degrees between them.

“Higher education can change lives and change lives for future generations,” Don Bobbitt said. “Susan and I have tried to honor the institutions where we’ve lived or worked.”

The Bobbitts are life members of the Arkansas Alumni Association, members of the Chancellor’s Society and are counted as Thoroughreds for their 27 years of consecutive giving to the U of A. They are also included in the Towers of Old Main, a giving society for the university’s most generous benefactors.