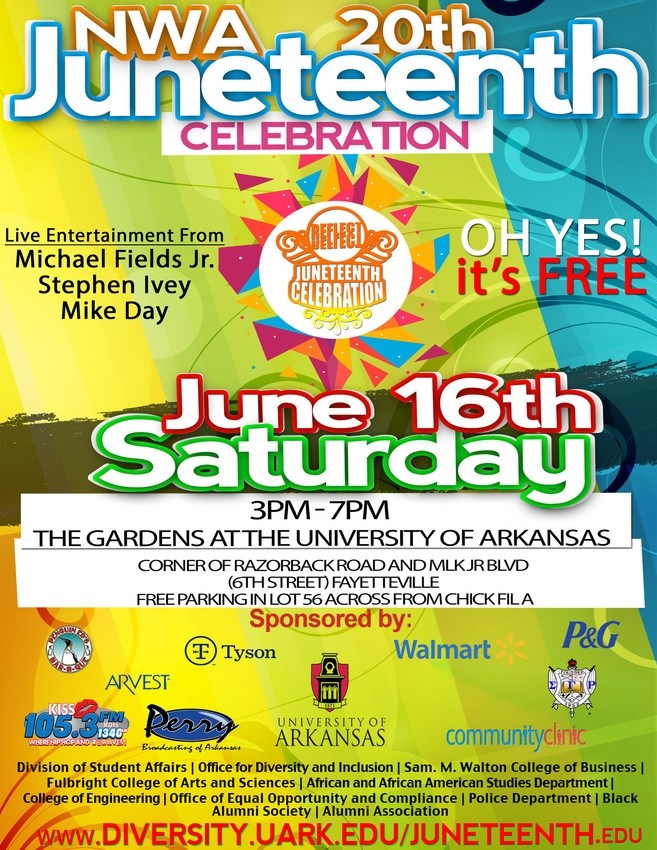 FAYETTEVILLE, Ark. – The Northwest Arkansas community is invited to join  the 20th annual Northwest Arkansas Juneteenth celebration from 3-7 p.m. Saturday, June 16, at The Gardens on the University of Arkansas campus, located on Razorback Road in Fayetteville. This event is free and open to the public.

Juneteenth commemorates the anniversary of African American emancipation, celebrates African American freedom and achievement and encourages continuous self-development and respect for all cultures.

Local vendors will display their products and explain their services. The NWA Community Clinic will also hold a health fair where medical and dental providers will conduct screenings to promote healthy living and address general medical questions.

The event has been organized by the University of Arkansas' African American Resource Group and the Juneteenth Celebration Committee.

Juneteenth, or the "19th of June," is the oldest nationally celebrated commemoration of the ending of slavery in the United States. It recognizes June 19, 1865, in Galveston, Texas, when Union Gen. Gordon Granger announced freedom for all slaves in the Southwest. This was the last major vestige of slavery in the United States following the end of the Civil War. This occurred more than two and a half years after the Emancipation Proclamation was issued by President Abraham Lincoln. Upon the reading of General Order No. 3 by Gen. Granger, the former slaves celebrated jubilantly, establishing America's second Independence Day Celebration and the oldest African-American holiday observance. In 2006, the Arkansas Legislature first recognized Juneteenth as a state memorial day commemorated by of a proclamation from Governor Huckabee.