National Athletic Trainers' Association Recognizes U of A Students With Scholarships 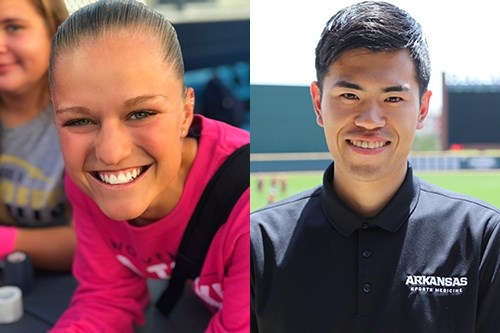 Both are first-year graduate students in the Master of Athletic Training degree program offered by the College of Education and Health Professions.

Dinkmeyer earned a bachelor's degree in kinesiology from Texas A&M University in 2016 while working as a student athletic trainer in the A&M internship program. She became interested in athletic training from the time as a seventh-grader that she asked the head football coach if she could be the team "water girl."

"I have been in love with the profession ever since," she said. "Being able to combine my passion for sports, heart for service and care for people is something very special to me."

She wanted to go out of state for her master's degree to experience a new place and expand her network. She met Mark Hinton, the athletic trainer for women's track and field at the U of A, when she was working with the A&M track and field team and was sold on the U of A program.

"After visiting here, I didn't apply anywhere else - I knew I wanted to be a Razorback," Dinkmeyer said.

She has not settled yet on a particular career path to follow. Varied clinical experiences during her education have allowed her to picture herself in several different settings.

Kato earned a bachelor's degree in sports science from Tokyo Gakugei University in 2016. His interest in athletic training grew from the time he spent in his junior year as an exchange student at Carthage College in Wisconsin. He also played baseball for 10 years in both Japan and the United States.

"Baseball is the most popular sport in my homeland so working Major League Baseball has been my dream job," he said.

He chose the U of A because of its position as a research university and the good reputation of the athletic training program.

"Also, having a great baseball program was a major push in the decision-making process," Kato said. "I am super thankful for my parents, Mitsuhiro and Miki. As an international student, I can't apply for scholarships that require U.S. citizenship to cover tuition. Without my parents' financial and emotional support, I would not have been able to overcome the financial barrier and pursue my dream."