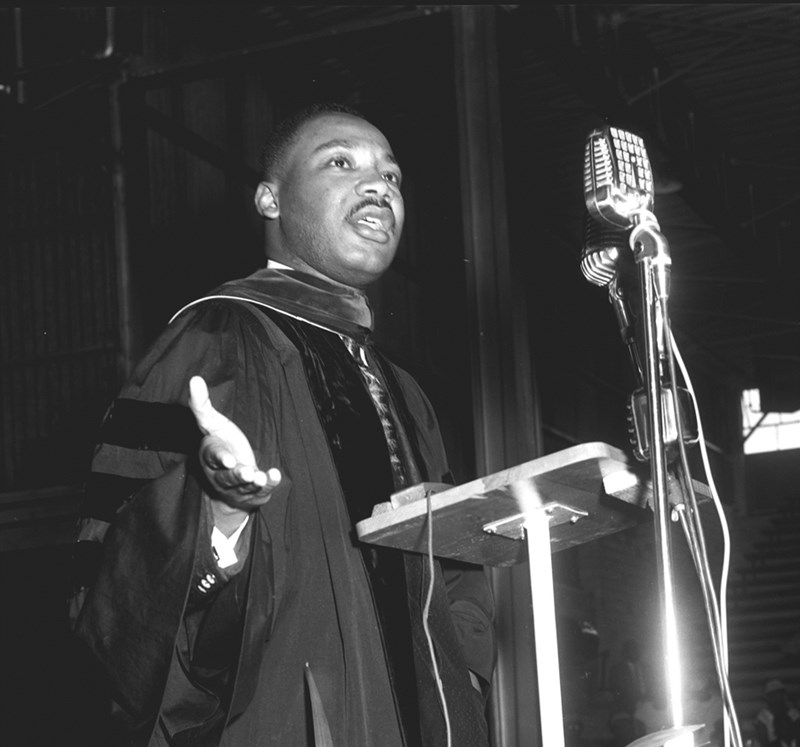 Martin Luther King Jr. speaking at the University of Arkansas at Pine Bluff commencement ceremony in 1958.

FAYETTEVILLE, Ark. – Several organizations at the University of Arkansas are holding events on Wednesday, April 4, as part of a nationwide commemoration of the 50th anniversary of the assassination of the Rev. Martin Luther King Jr.

At 10 a.m. in Mullins Library room 104, University Libraries will host a live stream viewing of the National Civil Rights Museum’s “A Day of Remembrance.” This event is being held in Memphis, Tennessee, at the museum located on the site of  the Lorraine Motel, where King was shot. Musical, dance and spoken word performances and reflections from civil rights leaders will be held through the day to salute King.

At 3:30 p.m. in Hillside Auditorium, room 202, the public is invited to watch a live stream of the museum’s official 50th Anniversary Ceremony featuring the laying of a wreath and an ecumenical liturgy, followed by additional musical, spoken word tributes and remarks from civil rights leaders. The Office of Diversity and Inclusion at Walton College is hosting this event and will also share the link with everyone across campus who can’t attend the group viewing.

At 6:01 p.m. the U of A will join churches and campuses across the country by ringing the bells of Old Main 39 times, once for each year of King’s life. Members of the campus and Northwest Arkansas community are invited to gather shortly before 6 p.m. at the Fulbright Peace Fountain between Old Main and Vol Walker Hall to peacefully honor the memory of King. This event is hosted by the University Libraries and the J. William Fulbright College of Arts and Sciences.