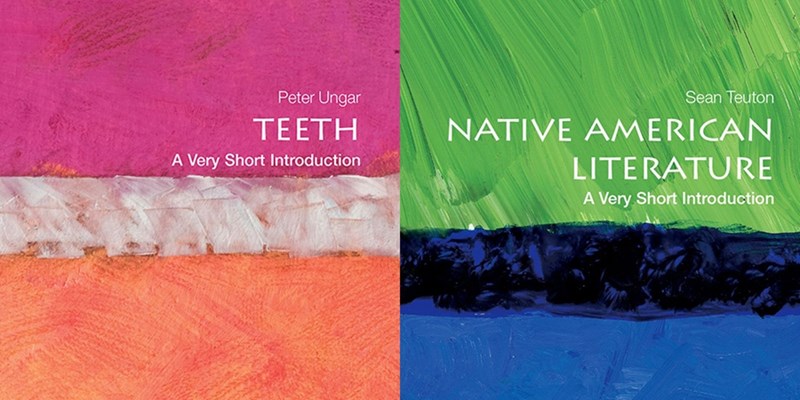 Two volumes of the Very Short Introduction series from Oxford University Press have been authored by U of A faculty, and a third is coming out later this year.

Three faculty members at the University of Arkansas are authors of Very Short Introductions, a series of texts published by Oxford University Press.

According to the Oxford University Press website, "Oxford's Very Short Introductions offers concise and original introductions to a wide range of subjects — from Islam to Sociology, Politics to Classics, and Literary Theory to History. Not simply a textbook of definitions, each volume provides trenchant and provocative — yet always balanced and complete-discussions of the central issues in a given topic."

Native American Literature: A Very Short Introduction, by Sean Teuton, associate professor of English, was published in January. Oxford University Press describes the book as "the first narrative on the emergence of North American indigenous literature" and "a place for discovery of virtually unknown literary achievements by indigenous people."

Teeth: A Very Short Introduction, by Peter Ungar, Distinguished Professor of anthropology, was published in 2014. It presents the story of teeth — from the earliest tooth-bearing fish hundreds of millions of years ago through amphibians, reptiles and, ultimately, mammals. This book was featured in an article about the Very Short Introductions series in The New Yorker.

In September 2018, Oxford University Press will publish The Psychology of Music: A Very Short Introduction, by Elizabeth Margulis, professor of music. This volume documents how the psychology of music has framed and addressed questions such as "What is musicality?" and "How does music move us?" It connects scholarship in the field to larger humanistic questions about music that are of interest to practicing musicians, music therapists, musicologists and the general public.

All three faculty members are part of the J. William Fulbright College of Arts and Sciences.