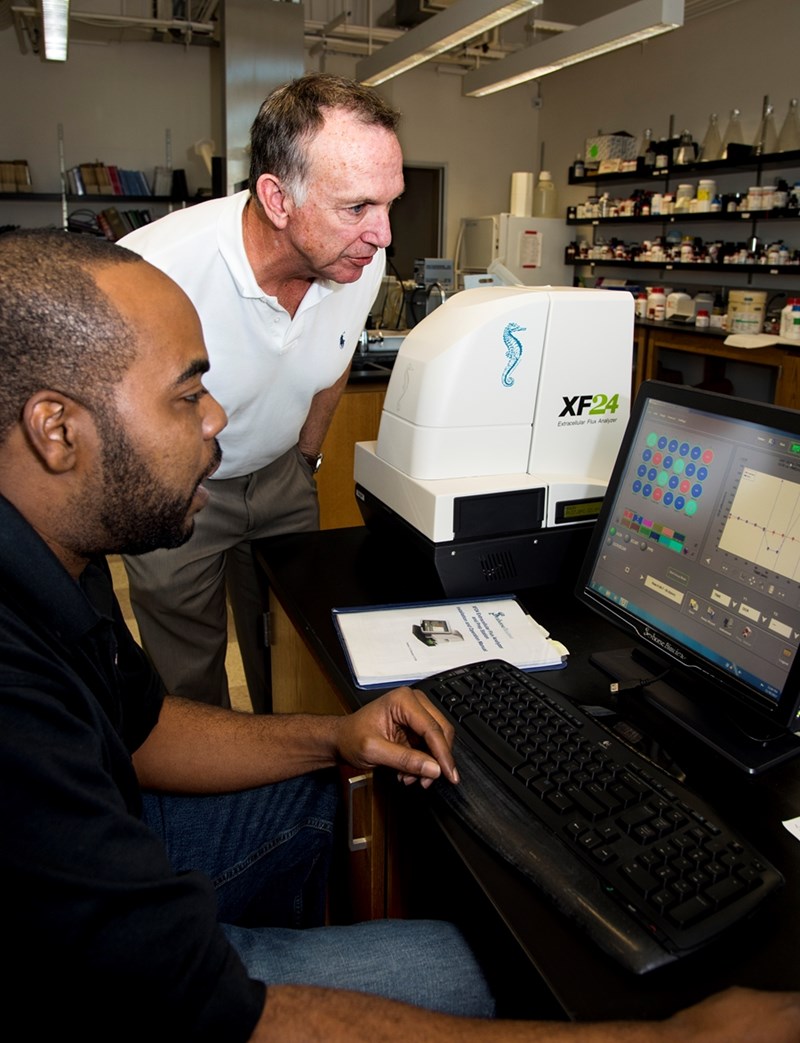 FAYETTEVILLE, Ark. – Poultry scientist Walter Bottje wanted to know what impact mitochondrial activity in chicken cells had on a bird's ability to convert food into muscle.

That scientific curiosity set Bottje, professor of poultry physiology for the University of Arkansas System Division of Agriculture, on a complex path of discovery that has as much meaning for human health as it does for the poultry industry.

Bottje's curiosity began with an interest in oxidative stress, an imbalance in cells caused by the overproduction of reactive oxygen species — also known as ROS or oxidants. When this happens, there may not be enough antioxidants to neutralize them.

ROS molecules readily react with other molecules, like proteins, causing damage to cells, Bottje said. Mutations caused by ROS are tied to many diseases, including cancer, aging, Alheimer's disease, autism, obesity, and diabetes.

A major site of oxidative stress in cells is in mitochondria, Bottje said. These organelles are a cell's power producers. They make 90 percent of a cell's adenosine triphosphate, or ATP.

"A byproduct of the ATP production can be mitochondrial ROS formation that occurs when electrons get fumbled during ATP production," Bottje said. "They leak out of the transport system, mix with oxygen and form oxidants."

High amounts of ROS are damaging to the cell, Bottje said, but low levels of ROS are important in coveying information to the rest of cell. They initiation changes in expression of genes and proteins in a process called signal transduction.

"In this way, mitochondria are constantly communicating important information to the rest of the cell," Bottje said. This process helps the body's cells adjust to changing needs and conditions.

In investigations of feed efficiency, or how well food is converted into growth and meat production, Bottje's group was able to show that animals with higher efficiency had better mitochondrial function that included less mitochondrial ROS production and less oxidation of proteins. Initial work on this was facilitated and funded by Cobb-Vantress Inc. of Siloam Springs.

More recently, Bottje — in collaboration with Byungwhi Kong and Sami Dridi, in the poultry science department — has been investigating global gene and protein expression in muscle. These studies are providing a picture of the basis of feed efficiency at the cellular level.

Oxidative stress turned out to be the first of many celllar activities affecting feed efficiency that Bottje has identified. "There are others and we keep finding them," he said.

Discovering the causal agents of oxidative stress and locating gene markers that identify more efficient birds is important to poultry industry breeding programs, Bottje said. High feed efficiency with minimal health effects is critical to the poultry industry, especially in light of a need to grow more food for a growing human population.

Bottje cited a conclusion of the United Nations Food and Agriculture Organization that the world will have to increase all food production 70 percent by 2050 in order to feed a population estimated to number 9.1 billion people.

"It's anticipated that we'll have to double protein production, both animal and plant foods, with only a 15 percent increase in arable lands in order to meet that goal," Bottje said. Improving poultry feed efficiency while avoiding consequential health problems will be one of the keys to accomplishing that, he said.

Bottje's research on these cellular functions also helps discern the functions by which ROS and oxidative stress affect human health, he said. Chickens are a good model for understanding obesity in people.

While feed efficiency is a good thing for chickens, it may not be so for humans.

The broiler birds he works with have been bred for such high feed efficiency that a baby chick that weights 40 to 45 grams when it hatches grows to 3,000 grams in seven weeks. That's roughly 1.5 ounces to 6.6 pounds in 49 days.

If humans converted food to muscle at that rate, a 7-pound newborn would weigh 450 pounds at seven weeks, Bottje said.

But the chickens make a good model for humans by studying the related cellular activity. Bottje said there are also similarities in lipid metabolism between chickens and people. Other animals are used as models for human obesity studies, he said, and chickens can help add a few more pieces to a very complex biological puzzle.

"The discoveries that we and other researchers are making help in the overall understanding of diabetes and other health issues," Bottje said. "We're adding to the foundation of knowledge about the causes of obesity that are important in solving the health problem."