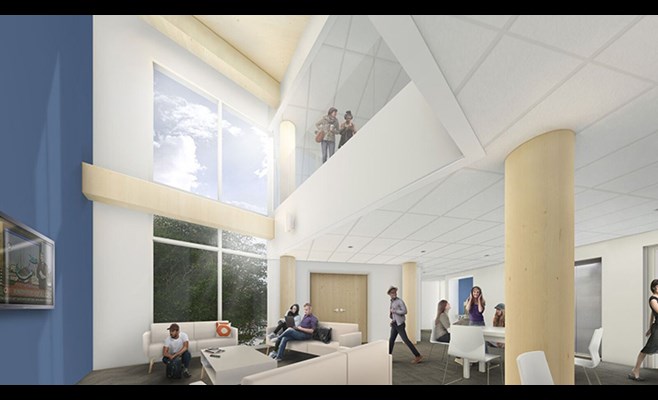 An architectural rendering of the “Knuckle Lounge” area. 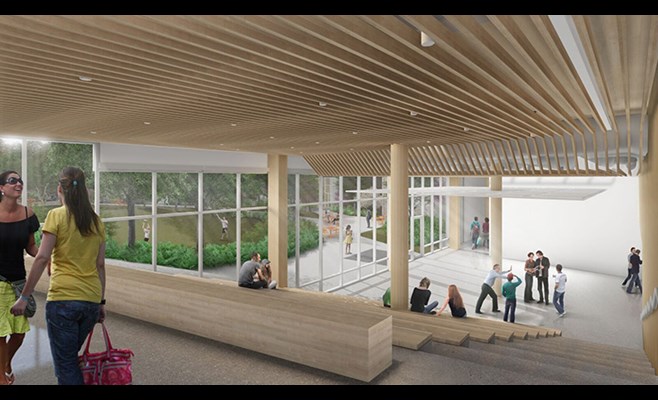 View from a mezzanine. 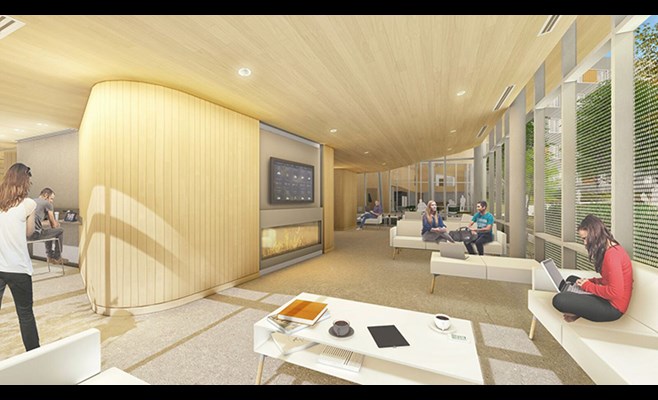 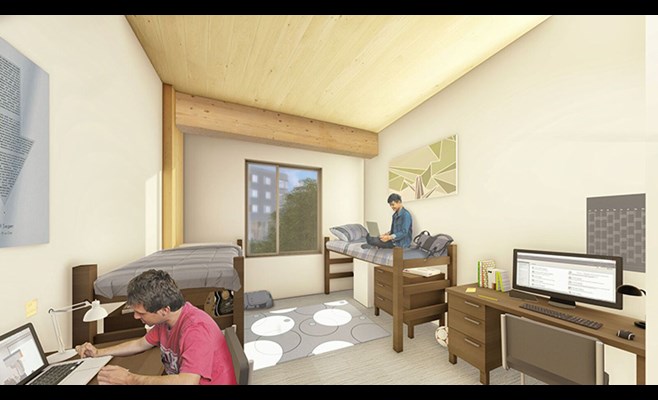 An architectural rendering of a semi-suite. 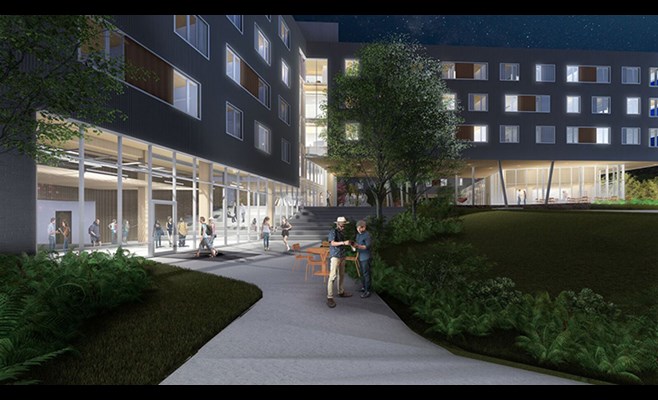 A courtyard of the residence halls at night. 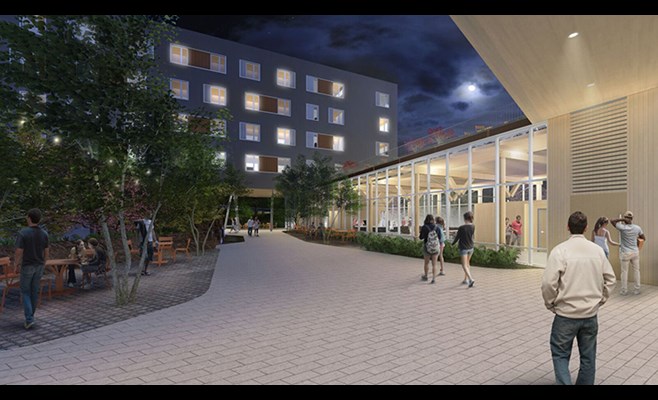 The center courtyard at night. 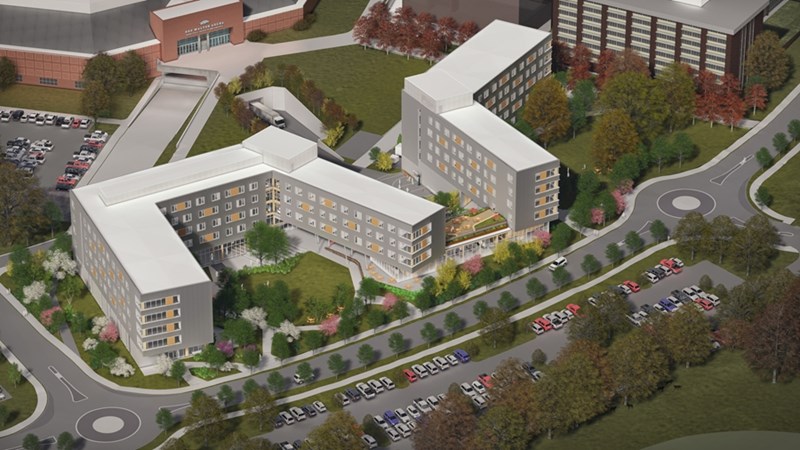 FAYETTEVILLE, Ark. – Construction is underway on the University of Arkansas’ newest student residence halls, with the buildings scheduled to open in time for the fall 2019 semester. The Stadium Drive Residence Halls, which will be located south of Pomfret Hall and east of Bud Walton Arena, are the first new student housing additions on campus since Founders Hall opened in 2013.

“The growth of our student body has stabilized in the past two years, but we still have a large unmet demand for on-campus student housing,” said Chancellor Joseph Steinmetz. “The investment that University Housing is making will help fill that need while also meeting several University of Arkansas priorities, including student success, innovative teaching and learning, creating a more collaborative campus and advancing the university’s land-grant and flagship mission of service to the state.”

The new residence halls are conceived as a Living Learning Community, housing several multidisciplinary communities focused on architecture, interior design, landscape architecture, art, theatre, music and English. This will allow on-campus students to live alongside others who share their interests and participate in monthly activities that promote academic and personal success. The Living Learning Community will also provide unique access to faculty members and a variety of events and study groups. The halls will have several extra features to facilitate the community activities that include:

“We are committed to fostering a campus that embraces collaboration and interdisciplinary pursuits to stimulate innovation in teaching and learning,” said Jim Coleman, provost and executive vice chancellor for academic affairs. “With this Living Learning Community we will have several departments working together to provide students with a collaborative experience focused on design and the arts.”

“Supporting student success is the U of A’s highest priority,” said Charles Robinson, vice chancellor for student affairs. “Studies have shown that students who live on campus tend to be more engaged in campus activities, more connected to campus resources, are more likely to succeed in the classroom, stay in school and graduate than students who live off campus.”

The endeavor is a collaborative effort engaging University of Arkansas Housing, Facilities Management, the J. William Fulbright College of Arts and Sciences, and the Fay Jones School of Architecture and Design. The project is also a design research initiative of the Fay Jones School.

The residential spaces in the Stadium Drive Residence Halls will each be five stories tall, with more than 200,000 square feet of total space, 368 residential rooms, extensive landscape design, residential kitchens on every other floor, exterior dining and study spaces and even covered hammock space. A community space called the Cabin connects the two residential halls.

The innovative project was conceived and designed by a design collective led by Leers Weinzapfel Associates of Boston; Modus Studio of Fayetteville; Mackey Mitchell Architects of St. Louis; and OLIN of Philadelphia. Nabholz Corporation of Rogers is the general contractor.

The project will include the first residence halls in the United States to use cross-laminated timber and they will be the first multi-story advanced-timber structures in the state of Arkansas. It is an innovation with a possible future economic impact for Arkansas.

“Cross-laminated timber — the most prevalent form of ‘mass timber’ — is a form of ‘super-plywood,’ that is, massive panels made of layers of dimensioned lumber adhered at 90 degree angles to each other,” said Peter MacKeith, dean of the Fay Jones School. “The entire laminate meets structural, fire, seismic, health and other required building code specifications, as must any construction material — and possesses great versatility in design and construction applications. On top of that, wood is a renewable resource — forests can be sustainably managed, harvested and regrown.

“Equally important, this is a building material for the emerging North American market that is grown right here in Arkansas. The market for cross-laminated timber could potentially be a major factor in the economic growth of the Arkansas timber industry."

At this time, the state lacks a processing facility to produce cross laminated timber, but it is hoped that this will change in the future, as projects like the Stadium Drive Residence Halls create a demand for the material, fulfilling another of the University of Arkansas’ priorities: providing service to the state and the adding to the state’s economic development.