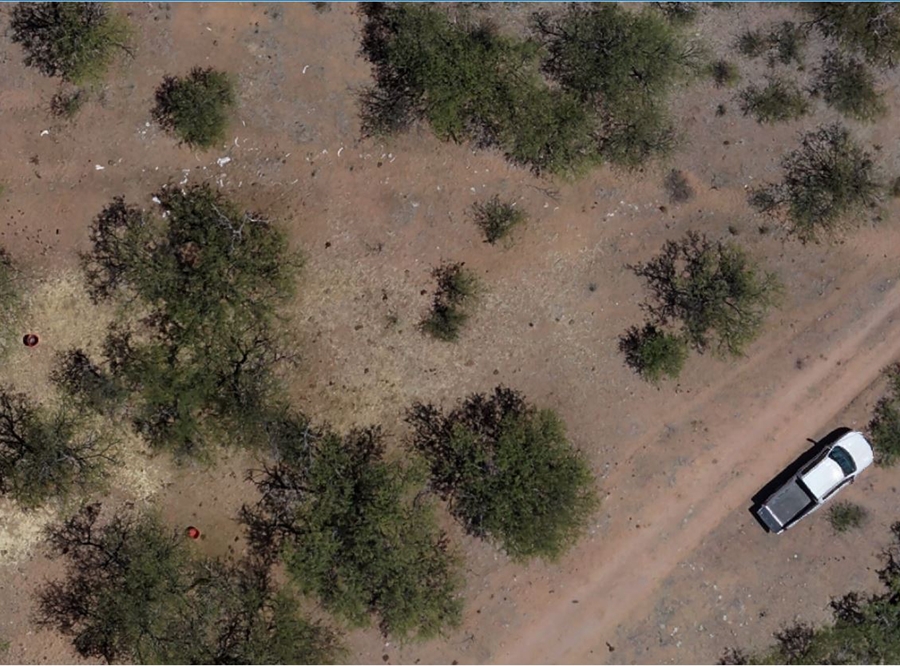 Aerial survey imagery taken from an elevation of 75 meters reveals cattle bones and other abandoned items.

Jason De León, associate professor of anthropology at the University of Michigan and a long-time collaborator with the researchers at the Center for Advanced Spatial Technologies  in the J. William Fulbright College of Arts and Sciences at the University of Arkansas, is the recipient of a 2017 MacArthur Foundation Fellowship.

The MacArthur Fellowship, or 'Genius Grant,' is a $625,000, no-strings-attached award given to extraordinarily talented and creative individuals as an investment in their potential. Awarded annually to between 20 and 30 individuals working in any field who show exceptional creativity in their work, 989 MacArthur Fellows have been named since 1981.

De León's collaborative research efforts with the Center for Advanced Spatial Technologies date back to 2010 when GIS education specialist Robyn Lane worked with De León and his students in using geospatial technologies to locate artifacts left behind by undocumented migrants, and to analyze how the type of artifact and their prevalence at migrant sites changed along the path of movement.

In 2017, research associate Malcolm Williamson worked with De León to assess the effectiveness of using small unmanned aerial systems in identifying the locations of human remains of individuals who had perished while attempting to cross the hostile terrain of southern Arizona. The non-profit group Humane Borders, Inc., working with the Pima County Office of the Medical Examiner, has identified more than 2,100 undocumented migrants that have died with the Pima County jurisdiction. Using the aircraft to search across large areas of the landscape will allow De León's team to cover much more territory than they are able on foot.

The MacArthur Foundation's award acknowledged De León for his "multidisciplinary approach to the study of migration from Latin America to the United States is bringing to light the lives and deaths of clandestine migrants crossing the U.S.-Mexico border into the Sonoran Desert of Arizona." De León also directs the Undocumented Migration Project, a long-term anthropological study of clandestine migration between Mexico and the United States that uses a combination of ethnographic, visual, archaeological and forensic approaches to understand this violent social process.

De León received a B.A. from the University of California at Los Angeles and a Ph.D. from Pennsylvania State University. He was affiliated with the University of Washington before joining the faculty of the University of Michigan, where he is currently an associate professor of anthropology and a faculty associate of the Latina/o Studies Program. He is co-curator of State of Exception/Estado de Excepción, which has been exhibited at the Museum of Contemporary Art Detroit, the New School, and Arizona State University Art Museum. His scholarly articles have appeared in American Anthropologist, Journal of Forensic Sciences, and Journal of Contemporary Archaeology.

About the Center for Advanced Spatial Technologies: The Center for Advanced Spatial Technologies is a multi-disciplinary center for spatial research and technology housed within the J. William Fulbright College of Arts and Sciences at the University of Arkansas. Established in 1991, CAST offers students, faculty, and the public opportunities to learn about the various applications of geographic information systems. CAST investigators span the social and physical sciences with expertise in the measurement and analysis of spatially referenced, multi-scalar data and processes, and are funded primarily through external sponsorships. More information about CAST can be found at cast.uark.edu. For ongoing news, follow CAST on Facebook and Twitter.