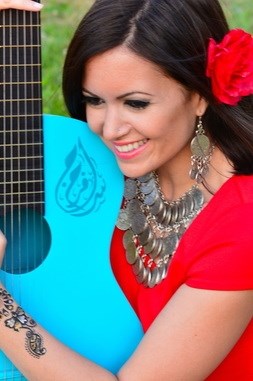 FAYETTEVILLE, Ark. – Internationally renowned vocalist Farah Siraj is performing her acclaimed fusion of musical styles at 7:30 p.m. Thursday, Nov. 9, at the Faulkner Performing Arts Center. The Faulkner Center is presenting this concert in partnership with the King Fahd Center for Middle East Studies. Siraj will be joined by the University of Arkansas Children’s Choir, who will sing in both English and Arabic.

Siraj has been named Jordan’s Musical Ambassadress, with a career that has taken her across the United States, Europe and the Middle East. She has performed at some of the world's most prestigious platforms, including the United Nations, Nobel Prize Hall, World Economic Forum, the John F. Kennedy Center, and the Lincoln Center.

Blending a host of musical styles, her sound has been described as a marriage of traditional Middle Eastern music, jazz, flamenco and pop, along with a myriad of other international musical influences. She was chosen as one of New York's “Summer Stars of Jazz” and currently leads an ethnically diverse quintet, Arabian Flamenco Jazz, with world-class musicians from the Middle East, Europe, the United States and South America.

Siraj released her first album, NOMAD, in 2011 and her most recent album, Dunya, in 2014. Her live performance of “Zariya” on Coke Studio @ MTV with iconic Indian composer A.R. Rahman reached No. 1 in India and No. 3 throughout the entire Middle East.

In addition to her musical career, Siraj is a noted humanitarian, helping raise awareness of the horrific consequences of war and violence. She is also an enthusiastic advocate of women’s rights, animal rights and refugee rights. She annually represents Jordan on United Nations World Peace Day and her exhaustive work in humanitarian efforts resulted in an invitation to perform before the United Nations Security Council as it passed legislation addressing the genocide in Darfur.

“We are excited for the opportunity to host Farah Siraj at the Faulkner Center," said Nicole Cotton-Leachman, managing director of the Faulkner Performing Arts Center. "This is our first endeavor with the King Fahd Center, and we are looking forward to working with them during our three-year partnership."

"Our mission with this partnership and with Farah specifically is to help spread the message of 'peace through music’,” she continued. "Not only do we strive to celebrate our growing cultural expansion in Northwest Arkansas, but we also feel it is our responsibility to help educate our community and campus on the positive impact music and the arts can play in cultural change and awareness."

Tickets are on sale now for this performance. To find times and ticket information visit faulkner.uark.edu or email faulkner@uark.edu—or stop by the Box Office, open Monday – Friday from 1:30 - 5 p.m.

The Faulkner Performing Arts Center is part of the J. William Fulbright College of Arts and Sciences.

About the Jim and Joyce Faulkner Performing Arts Center: The newest performing arts center at the university of Arkansas — a renovation of the old Field House — is named the Jim and Joyce Faulkner Performing Arts Center, in honor of the couple’s major gift to the project. Completed in September 2017, this world-class performance venue is 39,400 square feet, with seating for 587, and a stage that can accommodate as many as 250 performers. The center is the main performance venue for the university’s J. William Fulbright College of Arts and Sciences Department of Music and hosts guest musical activities for the university and Northwest Arkansas community.