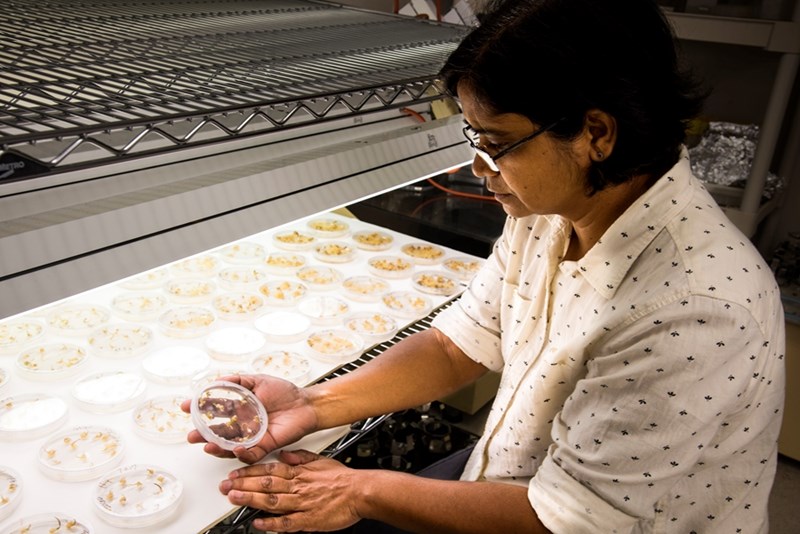 Rice breeders today develop improved varieties from genetic breeding stock that has been advanced through thousands of generations and over many decades with conventional crossbreeding techniques, said Vibha Srivastava, professor of crop, soil and environmental sciences for the Division of Agriculture.

Since rice breeding began at the division's Rice Research and Extension Center near Stuttgart in the 1930s, more than 40 rice varieties — oftened referred to as "cultivars" — have been released, helping propel Arkansas to the lead in U.S. rice production. The state accounts for half of the nation's rice production.

"Variety development is an important core effort in Division of Agriculture research," Srivastava said. The continual need for new varieties is driven by nature's tendency to change growing conditions.

Such changes include plant diseases that mutate to overcome resistance and insects that eventually adapt to defeat a plant's natural defenses. Environmental changes can include climate changes that affect air temperature or water availability, or the invasion of new weeds or insects.

In order to keep up with the demand for improved cultivars, breeders may soon have to look far afield — outside available breeding stock — in order to find new genetic traits for improved rice varieties, Srivastava said.

A lot of useful genetic traits are available in wild relatives of rice, Srivastava said. But to move those traits into available breeding stock by conventional means would require hundreds or thousands of crossbred generations that would take decades to accomplish.

She is adapting a technology called "CRISPR," scientific shorthand for "clustered regularly interspaced short palindromic repeats." These are segments of DNA that contain short, repetitive base sequences.

The Division of Agriculture recognized the importance of gene editing technology, Srivastava said, and invested in a research program to develop it for use in Arkansas rice breeding. The program teams Srivastava with two other division scientists — plant pathologist Ken Korth and weed scientist Nilda Burgos.

She emphasizes that gene editing is not the same as genetic modification, in which genetic code from one organism is inserted into another organism.

Under current USDA policy, CRISPR and other gene editing techniques are not considered genetically modifying technology. Srivastava recently received a USDA grant to further her research.

"A plant's genetic traits are developed through mutations that occur naturally in response to environmental stresses," Srivastava said.

Those mutations could be viewed as naturally occurring gene editing that results in new information being stored in the plants' genes. As a tool for plant breeders, Srivastava said, gene editing provides a way to copy and paste that information from rice plants' wild or distant cousins into available breeding stock.

"We use the information from the wild plant to try to induce the same mutation in breeding stock," Srivastava said.

Srivastava said gene editing is not currently being used in Division of Agriculture crop breeding programs. Division plant breeders in rice and other crops use available breeding stock developed by conventional methods.

Gene editing technology was developed in 2012 and has been studied more broadly by Srivastava and other scientists around the world since then. Building on her background in biotechnology development, Srivastava is learning how to apply the technology to rice and testing its effectiveness.

The goal is to have the technology and proven methods for using it ready when plant breeders need it. "If you're not working on this, you're already out of date," she said.

In her research, Srivastava is applying gene editing to tackle a persistent problem in rice grain quality — chalkiness.

Under certain environmental conditions, including high nighttime air temperatures, starch formation in the seed can take on a chalky texture that lowers the grain quality. Chalky rice heats unevenly during processing or cooking, leading to broken kernel or undesireable food texture.

Srivastava is targeting a gene that controls the development of chalkiness in rice. The gene is a regulator of processes that lead to chalky texture that responds to environmental stresses.

A naturally occurring mutation in a Chinese rice variety changes how that regulator gene responds to stress and reduces the inclination to form chalky texture. Srivastava is using gene editing techniques to take the information from that Chinese rice and try to induce that same mutation in Arkansas rice.

"The reference (mutated) gene is only used to understand how it works," Srivastava said. "No genetic material is actually being transferred from one plant to the other."

In another application of the technology, Korth is working with senior graduate assistant Kathryn Haydon to turn off a gene that controls production of enzymes that cause rancidity in the bran layer of the rice seed.

The bran layer is removed when processing white rice, but is left in place to make brown rice. Korth said white rice will last virtually forever on store shelves or in kitchen pantries, but brown rice goes rancid in a matter of months.

If Haydon's efforts can result in gene-edited rice that turns off or reduces that enzyme production, the shelflife of brown rice may be extended, Korth said.

Burgos is applying CRISPR technology to generate herbicide resistance in crops, using rice as the model.

"We intend to use information on herbicide resistance traits from weeds to endow rice, or other crops, with the same traits," Burgos said. "I am looking for genes in weeds that are not already used by the chemical companies for crop improvement."

PPO refers to protoporphyrinogen oxidase, an enzyme that is targeted by some herbicides such as Aim, Blazer, Goal Tender, Reflex/Flexstar, Ronstar, and Spartan Charge.

Burgos said Patrick Tranel, a weed scientist from the University of Illinois at Champaign-Urbana, first discovered the gene mutation in tall waterhemp. The same mutation occurs in PPO-resistant Palmer amaranth.

Burgos' Lab also found other mutations in the PPO gene of PPO-resistant Palmer amaranth, which may be useful for editing in rice or other crops.

A crop with such a trait would allow farmers to use PPO-inhibitor herbicides "over the top" to control weeds even while the crop is growing in the field.

Once she works the kinks out of the technique in rice, Burgos wants to apply the technology to other traits and other crops.

The techniques they're developing for rice can also be applied to soybeans, wheat and other crop breeding programs, she said.

For now, Srivastava said, their gene editing work stays in the Arkansas Agricultural Experiment Station's labs and greenhouses in Fayetteville. "We're not developing breeding material at this stage," she said. "None of these plants will leave the lab."

"Our aim is to have the technology ready for when it is the right time to use it to help keep the Arkansas rice industry competitive in world rice markets," Srivastava said.

About the Division of Agriculture

The University of Arkansas System Division of Agriculture's mission is to strengthen agriculture, communities, and families by connecting trusted research to the adoption of best practices. Through the Agricultural Experiment Station and the Cooperative Extension Service, the Division of Agriculture conducts research and extension work within the nation's historic land grant education system.