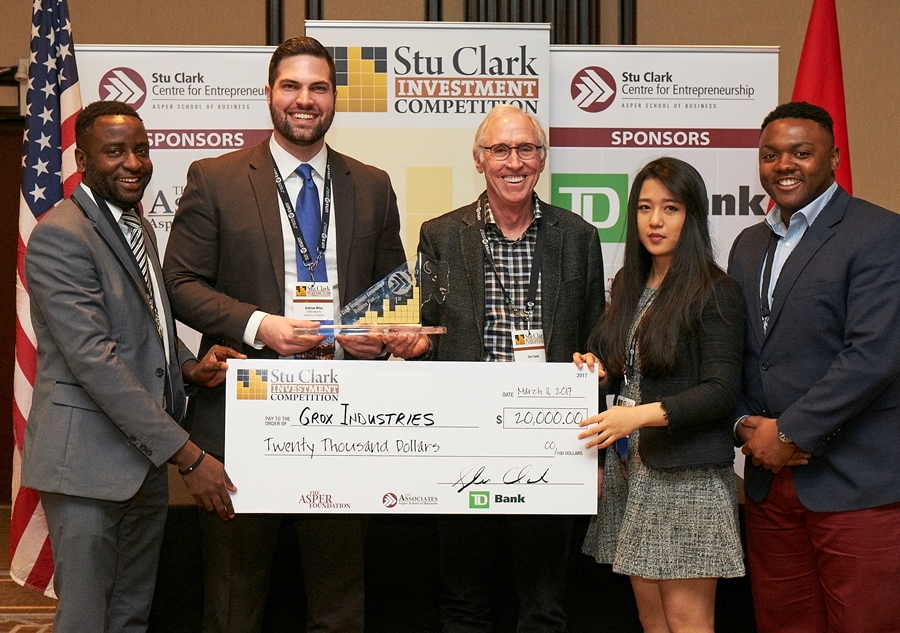 Grox Industries beat 15 teams from across Canada and the United States, bringing home nearly $15,000 for their first place win, as well as for a second place finish in the logo competition and third place in the elevator pitch contest.

The Grox team is working with a technological innovation from the lab of U of A chemistry professor Ryan Tian and has developed a custom, graphene oxide-based window coating line called Helios. Compared to other coatings on the market, Helios absorbs more damaging ultraviolet light, while allowing more aesthetically pleasing visible light to pass through the window. The team’s winnings will support the research and development necessary to demonstrate that the coating can be manufactured safely in large quantities.

“There are growing pressures and incentives in the glass coating industry, all of which drive consumers and glass manufacturers toward greater energy efficiency,” said Grox Industries CEO Andrew Miles, an executive M.B.A. student in the Sam M. Walton College of Business. “But the low-emissivity window market has not seen a functional breakthrough in 30 years. We believe Helios will change that.”

The chemical composition of the Helios coating is adjustable, allowing the company to customize the coating for varying environments, climates, and altitudes. This adaptability for their product line, and the fact that they have strong intellectual property, gave the team a competitive edge over the competition at Manitoba.

In addition to Miles, the team includes U of A students:

“Bringing a new technology to the market is much more challenging than many people imagine,” said Carol Reeves, associate vice provost for entrepreneurship, whose year-long course in entrepreneurship has served as an incubator for the Grox Industries team. “With the inventor, Dr. Tian, here at the University of Arkansas, combined with an experienced and motivated team, Grox has an edge that many new companies lack, in addition to addressing a significant problem in the market.”

“The low-cost, environmentally benign Helios coating can be made to be more versatile than most products in the market,” said Tian.
Grox Industries joins UA student team Surface Mod in the winner’s circle for the 2017 startup competition season; Surface Mod took first place in the recent Georgia Bowl competition. In April, the Grox team will compete in the prestigious Rice University Business Plan Competition in Houston, Texas, which is the world’s largest student startup competition.