Author Mohja Kahf to Read from 'Hagar Poems' and Other Work 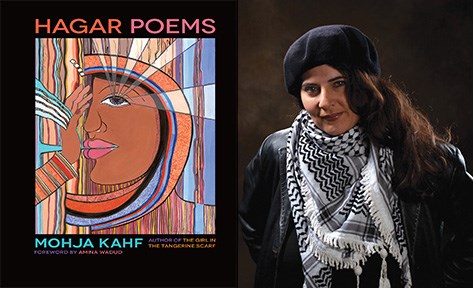 FAYETTEVILLE, Ark. – Mohja Kahf, professor of English at the University of Arkansas, will read her poetry and sign her new book Hagar Poems at 7 p.m. Tuesday Jan. 31 at Nightbird Books in Fayetteville and at  2 p.m. Sunday Feb. 5 at the Fayetteville Public Library.

The Nightbird event takes place during the monthly meeting of the Ozark Poets and Writers Collective and is sponsored in part by the King Fahd Center for Middle East Studies.

The library event is part of the Fayetteville Library’s ongoing University of Arkansas Press Spotlight series.

Both events are free and open to the public and will include refreshments.

Hagar Poems, published by the UA Press, re-imagines the story of Hagar, Abraham, and Sarah, the ancestral feuding family belonging to all three religious traditions--Judaism, Christianity, and Islam. The poems also delve into other characters, such as Mary and Moses, and touch on figures from early Islam, such as Fatima and Aisha. Readers will find sequels and prequels to the traditional narratives, along with modernized figures claimed for contemporary conflicts.

Praised as “brilliantly original in its conception, thrillingly artful in its execution,”Hagar Poems is a compelling shakeup of not only Hagar’s story but also of current roles for all kinds of women in all kinds of relationships.  “Kahf brilliantly transposes the disorienting experience of life in the U.S. for many immigrant and marginalized women with the rich history of the Abrahamic religions” (Booklist Review). Christian Feminism Today said, “In a world where Islamophobia, hijabi Olympians, and burqini bans feature in everyday news, Arab-American poet Mohja Kahf’s new collection is timely and relevant, delivering a clear-eyed vision of women in Islam.”

Mohja Kahf teaches courses on Arab American literature, the Quran, medieval Spain, postcolonialism, and feminist thought. She was born in Damascus, Syria, in 1967 to parents who immigrated to the United States in 1971. She is the author of a book of poems, E-mails from Scheherazad, and a novel, The Girl in the Tangerine Scarf.