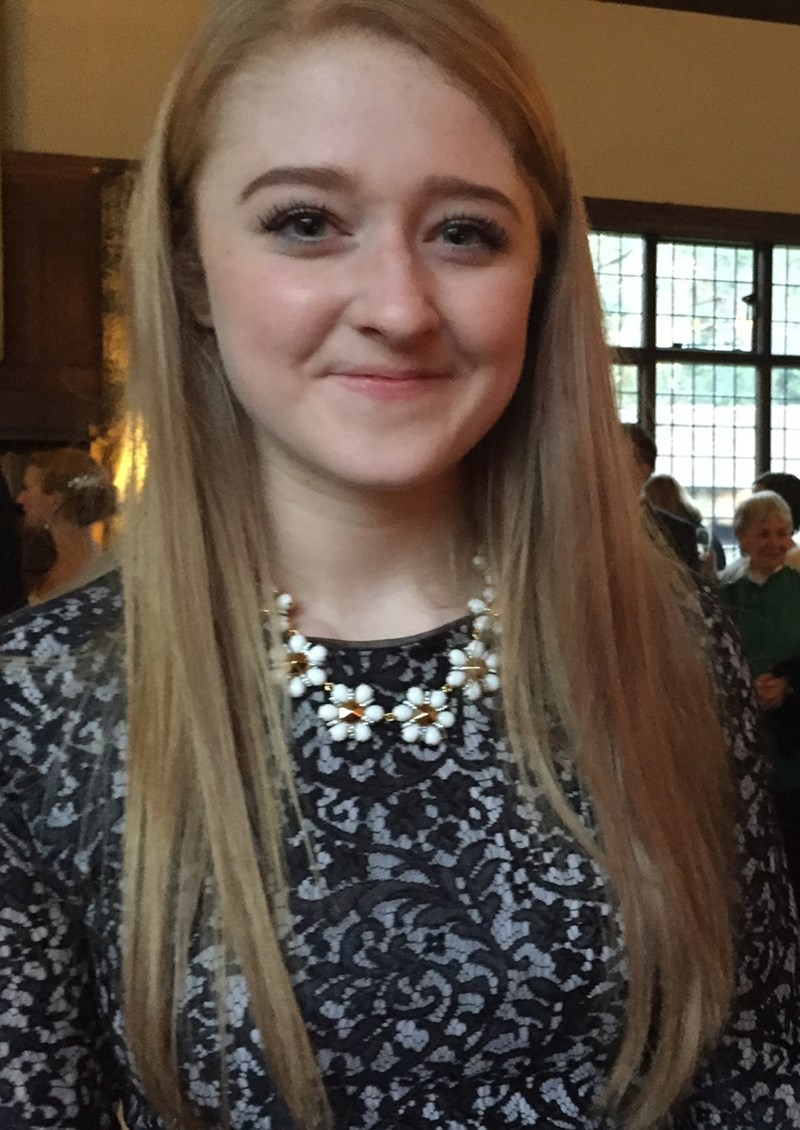 FAYETTEVILLE, Ark. – A wicked sense of humor, a keen interest in human rights and politics, a sparkling personality and a quick wit best described Jessamy Eve Samuels – and it’s with these qualities in mind that her family and friends recently established the Jessamy Eve Samuels Memorial Scholarship in her honor.

“Jessamy had an unparalleled love of learning and a constant drive to empower others in any passion that they wished to pursue,” said her older sister, Cicely Samuels. “Through this scholarship, we hope to echo her hopes by empowering young people to throw themselves into an educational journey at this fantastic university that Jessamy was proud to call her school.”

Jessamy passed away in May 2016 after a tragic fall while hiking at Hawksbill Crag in Newton County, devastating those close to the vibrant 19-year-old University of Arkansas freshman. She was an honors student in the J. William Fulbright College of Arts and Sciences and was interested in studying anthropology and journalism. Her death occurred a year to the day after Jessamy graduated from Rogers High School with Distinguished Honors.

Born in London, England, in 1997, Jessamy was named for the street on which her great-grandmother lived, and she flourished in Rogers when her family moved there in 2004. She became a U.S. citizen in 2015, and as a passionate political advocate, she was looking forward to participating in her first presidential election.

“Jessamy loved Arkansas and the U of A,” said her mother, Sallyann Samuels. “She wanted the best and the brightest to stay in state and to make this an even better place for all.”

The Samuels family and other donors contributed more than $60,000 to create the Jessamy Eve Samuels Memorial Scholarship. It will be awarded to two incoming freshmen each year. Each student will receive $5,000 a year for four years toward their studies. To qualify, students must be  graduates of an Arkansas high school, meet GPA and ACT requirements, intend to be an honors student, display leadership abilities and be involved in extracurricular activities.

Applicants are also asked to submit a 1,000- to 2,000-word essay about their academic and extracurricular life, interests and achievements, and to discuss how they would use the scholarship and their time at the University of Arkansas to forward Jessamy’s legacy. Interested applicants can learn more and apply on the Fulbright College Scholarships & Fellowships website.

“Jessamy believed that everyone should have access to education,” said her father, Mark Samuels. “Creating the scholarship has allowed all who knew and loved her to give back in her name. In establishing this scholarship, we are looking for a way to celebrate Jessamy’s love of learning by giving future students this gift. She would have been grateful for everyone’s incredible generosity.”

In 2014, Jessamy attended the prestigious Arkansas Governor’s School, and throughout her high school years she was involved in Young Democrats, eventually becoming president of her school chapter. She was also the group’s first female 3rd District Director, and at University of Arkansas was elected College Director for the YDAR Environmental Task Force, which she also helped to create. Jessamy was posthumously awarded The Jeffrey Ledbetter Memorial Award for Outstanding Young Democrat at the annual Jefferson/Jackson Dinner in the presence of former U.S. President Bill Clinton.

“Jessamy embraced what we do in LJP, training young people to investigate and report on the challenges minorities face,” said LJP director Gina Shelton. “She brought sensitivity, insight and passion to the program. Her potential was unlimited. She was interested in everything: people, politics, the world. She inspired those around her with her intelligence and humor.''

At the U of A, Jessamy made both the dean’s list and the chancellor’s list for both semesters she spent at the university, and had just begun an internship at the Museum of Native American History in Bentonville.

“Jessamy was smart, communicative, pleasant and full of life. I’m glad to have known her,” said Daniel B. Levine, university professor of classical studies in Fulbright College’s Department of World Languages, Literatures and Cultures. Jessamy took his Honors Humanities course.

“My first interaction with her was when I asked the students to introduce themselves and tell the class what their names meant,” he said. “Jessamy was unsure of hers, and after class I looked it up and shared that her name means jasmine flower. That seemed appropriate: she was always a bright light and pleasant company in our class.”

Levine recalled a particularly lively classroom debate Jessamy took part in, concerning where the Parthenon marbles should reside – in London’s British Museum or Athens’ New Acropolis Museum. When a classmate jokingly disparaged the British for having bad teeth, Jessamy stood up said she was English and had “perfectly lovely teeth, thank you.” The class erupted into applause.

“She was a beautiful person inside and out, and blessed her family and her friends with happy memories of how totally awesome she was,” he said.

However, as important to Jessamy as her studies were, she was also passionate about the environment, healthy food bowls, coffee, world religions, art, literature and movies, said Sallyann Samuels. Dan in Real Life, the Harry Potter series and Legally Blonde were equally as important to her as works by Wes Anderson and Sofia Coppola.

“She had a side that adored fashion,” Sallyann Samuels said. “Music was a true love of hers, from The Strokes to Peter Paul and Mary. She loved going to Lollapalooza and other music festivals, and one of her legacies is a host of Spotify playlists. She could talk to anyone, young and old. She was a great friend, empathetic, understanding and encouraging.”

Donations will continue to be accepted for the Jessamy Eve Samuels Memorial Scholarship, to help commemorate this extraordinary young woman and provide future opportunities for students like her.

For more information please contact Blake Rickman, director of development and external relations, at 479-575-3712 or brickman@uark.edu.