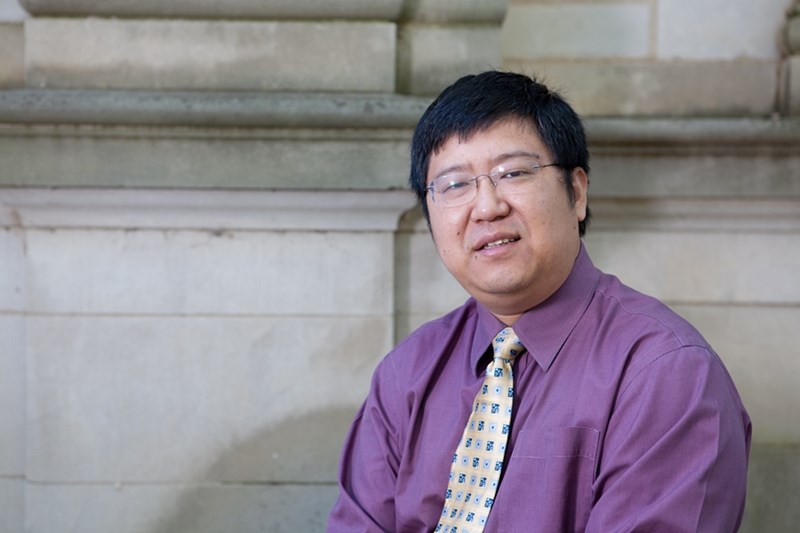 FAYETTEVILLE, Ark. – University of Arkansas researchers have received a $595,000 award from the Defense Advanced Research Projects Agency, or DARPA, to help build a single-photon detector using quantum dots. Their work is part of a multi-institutional project that seeks the fundamental limits of quantum semiconductor photon detectors.

A photon detector, or photodetector, is a device that absorbs optical energy and converts it to an electrical signal. These devices are used widely in optical communications systems, computing systems and various sensors. A quantum dot is a piece of semiconducting material on the scale of a few nanometers.

The U of A researchers, Shui-Qing “Fisher” Yu, associate professor of electrical engineering, and Greg Salamo, Distinguished Professor of physics, were chosen because of their expertise with quantum dots, semiconductor optoelectronics and molecular-beam epitaxy, the last of which is a method of depositing nanocrystals to create quantum dots. They will collaborate with researchers at Dartmouth College and the University of Wisconsin to develop an architecture for the device.

Yu and Salamo’s contribution is part of a much larger project involving six teams, including the University of Virginia; the University of California, San Diego; Massachusetts Institute of Technology; Yale University; and Sandia National Laboratories, a research and development laboratory of the U.S. Department of Energy; in addition to Dartmouth College and the University of Wisconsin. Each team will work on different approaches ranging from semiconductor-based devices to bio-inspired devices. Total funding for the project is $2.5 million.

“This is an extremely competitive project, and we are very proud to be selected for the award,” said Yu.

An agency of the U.S. Department of Defense, DARPA is responsible for developing emerging technologies.