Bryan Stevenson to Share Stories at the Heart of 'Just Mercy' 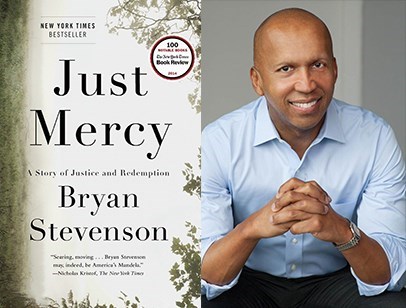 FAYETTEVILLE, Ark. – University of Arkansas students, area book club members and many others are in the process of reading Just Mercy, by Bryan Stevenson, this year’s selection for the One Book, One Community program. The book has been assigned in several freshman classes as well as a number of upper level courses dealing with the American judicial and criminal justice systems.

Chancellor Joe Steinmetz recently endorsed Just Mercy in a video message to the campus and community, calling the book “thought-provoking and socially significant.”

Bryan Stevenson is a lawyer who has spent his career seeking justice for the people whom the legal system often fails: low income and minority defendants, the mentally ill and the wrongly condemned. Just Mercy is a memoir, centered on his Equal Justice Initiative based in Montgomery, Alabama. He tells the story of his own personal growth as he learns of the flaws in the legal system, while also telling the stories of the people who were his clients.

Stevenson will visit the U of A campus and deliver a free public lecture at 6:30 p.m. Thursday, Nov. 3, in the Reynolds Center auditorium. He will also speak to a meeting of book clubs at the Fayetteville Public Library on Friday, Nov. 4.

The One Book, One Community committee is in the process of organizing several public events on the themes of justice and the death penalty, to supplement the discussion leading up to Stevenson’s lecture. The times and places of some of these events are still to be determined.

“The supporting events in the One Book, One Community program are an important part of the overall experience,” said Kevin Fitzpatrick, co-chair of the committee. “It is important to expand the discussion for the people who are reading Just Mercy, and connect with other people who are concerned about these issues. We hope this will encourage more people to read the book and that it will help deepen their understanding.”

The One Book, One Community committee looks for a book that is timely and relevant, but also one that has literary merit.

“Bryan Stevenson is a wonderful writer and storyteller,” said David Jolliffe, committee co-chair. “Just Mercy tackles important issues with clear, effective, forceful writing that tells compelling stories. It is accessible to anyone who enjoys a well written book that encourages them to think.”

The One Book, One Community program receives financial support from the Office of the Provost.