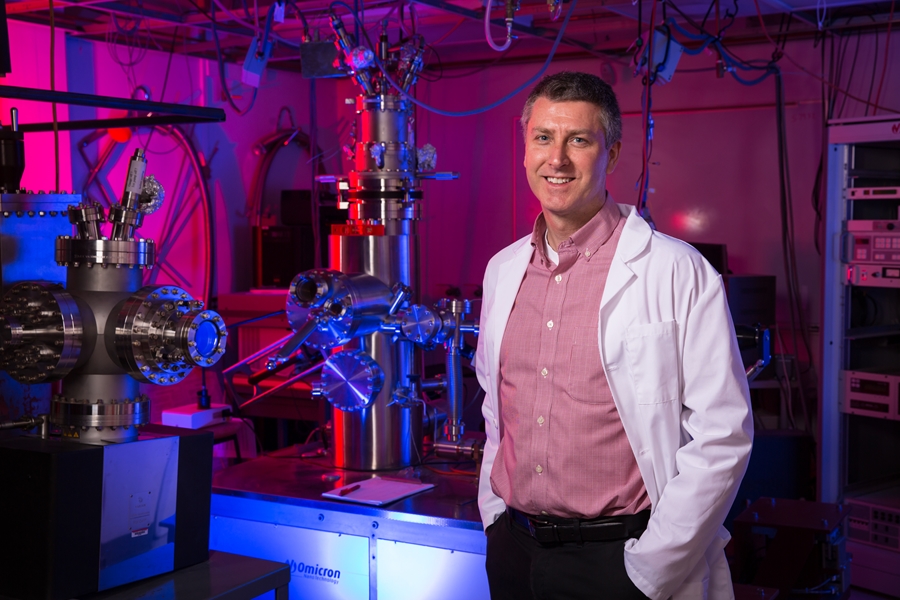 FAYETTEVILLE, Ark. – An international team of physicists, led by researchers at the University of Arkansas, has observed spontaneous mechanical buckling in freestanding graphene using scanning tunneling microscopy, indicating it has potential to be a new electronic power source.

The discovery advances the understanding of graphene, a two-dimensional material that is a mere single atom in thickness, and its potential role in the development of next-generation electronic devices.

The research team published its findings Tuesday in Physical Review Letters, the journal of the American Physical Society. The discovery was also highlighted on the society’s Physics news site.

The researchers used scanning tunneling microscopy, which produces images of individual atoms on a surface, to demonstrate the spontaneous mechanical buckling.

The finding opens a new field of research in the study of dynamic behavior of freestanding two-dimensional materials controlled by scanning tunneling microscopy, said Paul Thibado, professor of physics at the U of A who led the study.

“Freestanding graphene is constantly in motion,” Thibado said. “It moves up and down like a buoy bobbing in the ocean. The bobbing motion is intermittently interrupted when the material flips from looking like the inner part of a bowl to the outer part of the bowl – that high velocity, snap-through movement is known as mechanical buckling.”

The researchers found that the buckling movement correlates to a phenomenon known as a “Lévy flight,” named for the French mathematician Paul Lévy. Lévy flight refers to a random walk process in which long excursions occur with higher statistical probabilities than a normal system in constant random motion. Lévy flights are common in biological systems and accurately model animal foraging patterns.

The phenomenon hasn’t been observed at the atomic-scale with an inorganic system until this study, Thibado said, making it possible to predict and control long excursion events.

“Buckling events in 2-D materials hold the key to understanding the phenomenon of Levy flights,” he said.

Freestanding graphene’s continuous motion, augmented by the high kinetic energy of these random inversions, could be converted into electrical current and used in place of batteries to power small electronic devices, Thibado said. There is an urgent need for the development of power sources other than batteries, especially as wireless sensor networks that connect non-computer objects to the internet grows.

Such wireless sensor networks are collectively known as the Internet of Things, such as running shoes that provide performance feedback to an athlete or a “smart” irrigation system that monitors and reports moisture levels of distant fields.