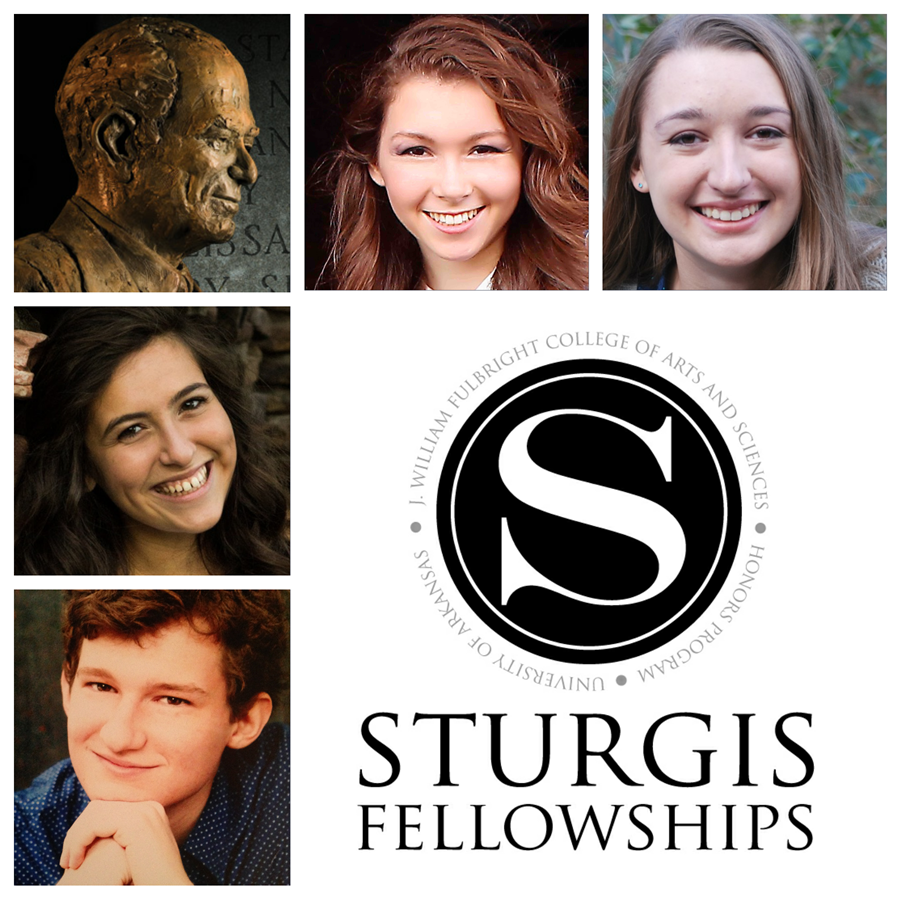 The Sturgis Fellowship, the University of Arkansas' oldest fellowship program and among its most prestigious, offers a unique opportunity for Fulbright College's most exceptional and hard-working students. Previous awardees have been recognized at the state and national level for their academic achievement and community service.

Sidney Burris, director of the Fulbright College Honors Program and chair of the Sturgis Fellows selection committee, said the fellowships were made possible by the continual support of the Roy and Christine Sturgis Charitable and Educational Trust.

"We are very grateful, and for three decades their support has created incredible opportunities for remarkable students," Burris said. "The Sturgis gift has established a lasting legacy that has made a difference in the lives of hundreds of our top scholars."

Burris said the Sturgis Trust awards each fellow $70,000 over four years. This award covers tuition, room and board, and provides support for educational tools such as computer hardware and software, high-quality musical instruments, professional journals and participation at academic conferences. Sturgis Fellows must pursue a major within Fulbright College, complete an intensive academic program and graduate with honors. They are also encouraged to study abroad.

Eamon Lauster, who is a graduate of Little Rock Central High School, where he was a national honor Thespian, and frequently a member of the Quiz Bowl team. He is a National Merit Scholar and an AP Scholar with Distinction. He has worked across central Arkansas as a volunteer with the Central High Merrymakers. Lauster plans to major in Biology. His parents are George and Martha Lauster.

Maya Ungar, who is a graduate of Fayetteville High School, where she was president and founder of COEXIST, a club that promotes interfaith tolerance and understanding, and president of ASTRA, a community service club. She was also involved in Model United Nations, the National Honors Society, Mu Alpha Theta, the National French Honors Society and the Young Feminists club. She is an AP Scholar, was elected a Supreme Court Justice at Arkansas Girls State and spent the summer as an intern for the Peace Corps in Washington D.C. Ungar plans to major in International Studies and Political Science. Her parents are Peter Ungar and Diane Serenson-Ungar.

Katja Wiederkehr, who is a graduate of Van Buren High School, where she was a National AP Scholar, as well as her school's representative at the Hugh O'Brien Youth Leadership Conference, who attended Arkansas Governor's School. She was involved with Student Senate, Mu Alpha Theta and was Secretary of National Honor Society, along with being involved with multiple community service projects in FCA where she was Senior Officer for the club. She was also a member of the Varsity Tennis Team and was Captain of the Varsity Girls Soccer Team. Wiederkehr plans to major in Anthropology and Biology. Her parents are Kevin and Melissa Wiederkehr.

Sidney Wilson, who is a graduate of Rogers High School, where she was a National Merit Scholar, a National AP Scholar and Mu Alpha Theta President. She was also her school's Student Environmental Association officer, a member of National Honor Society and Model UN, French horn section leader, and studied mathematics at Arkansas Governor's School. Additionally, she volunteered at the Rogers Public Children's Library and tutored students in algebra and geometry. Wilson plans to major in Mathematics. Her parents are Kevin and Jennifer Wilson.

About the Fellowship: The Sturgis Fellowship in the J. William Fulbright College of Arts and Sciences was established at the University of Arkansas in 1985 through the generous philanthropy of the Dallas-based Roy and Christine Sturgis Charitable and Educational Trust with an endowment of $2 million. The program's success led to additional gifts in 1992 and 1998, bringing the total program endowment to $10 million. With only 20-30 Sturgis Fellows on campus at any given time, each receives the kind of individual attention from the director, associate director and staff of the Fulbright College Honors Program that delivers a memorable and productive college experience.