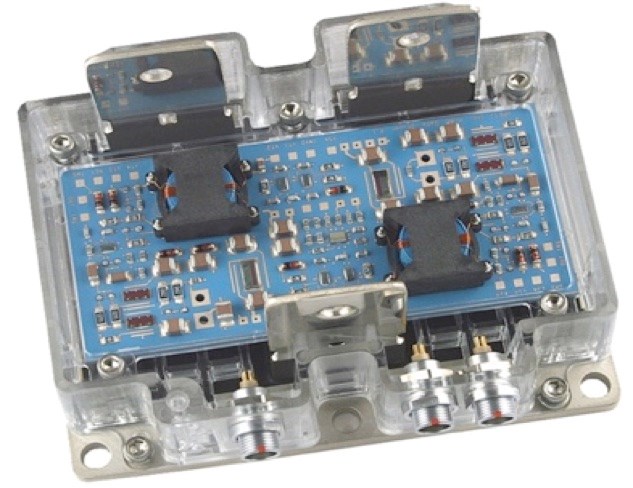 The researchers will install and test high-temperature optocouplers on this power module developed by at the University of Arkansas' High Density Electronics Center.

FAYETTEVILLE, Ark. – The U.S. Department of Energy awarded $599,901 to University of Arkansas engineering researchers to continue developing an “optocoupler” – a packaged light emitter and detector – to improve the performance of electric vehicles.

When integrated into high-density power modules, the technology will lead to superior performance in terms of power density, energy efficiency and thermal management.

Unreliable and inefficient power modules are a major obstacle to the further development of electric vehicles. Current semiconductor materials and optoelectronic devices in power modules struggle when engine heat is higher than 125 degrees Celsius or lower than –55 degrees Celsius. Under these conditions, power modules lose efficiency and function poorly, making the motor less reliable.

“It isn’t the intrinsic properties of power devices themselves that prevent their use at higher temperatures, but rather the low-voltage electronics needed to drive them and the packaging that surrounds them,” said Zhong Chen, assistant professor of electrical engineering and lead researcher on the project.