Children with Autism and Peers Learn About Art in Crystal Bridges, U of A Partnership 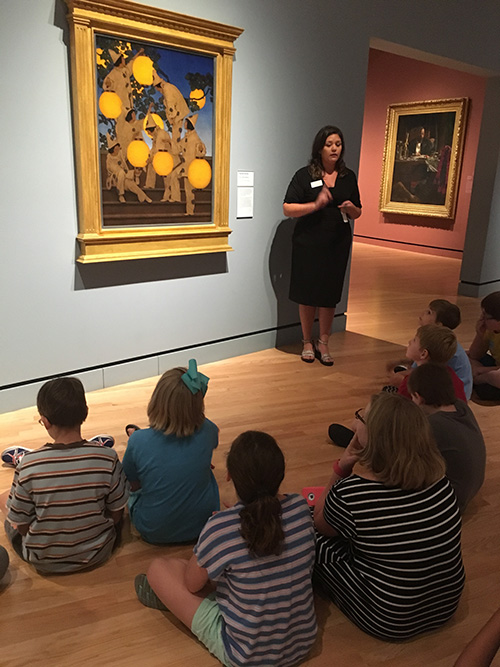 FAYETTEVILLE, Ark. – You can usually tell when you’ve lost a child’s attention when the gaze wanders away. Emily Rodriguez found that was rarely the case when she was discussing an artwork with children attending Camp Connect at Crystal Bridges Museum of American Art.

Rodriguez works in Access and Inclusive Programs at Crystal Bridges. The museum in Bentonville partnered with the University of Arkansas’ special education program to offer a weeklong camp in July for children with autism and children who do not have autism.

“We were having a conversation in the gallery with open-ended questions about what someone’s facial expressions might mean,” Rodriguez said. “Some of the campers with autism looked at detail in a very different way and gave us new perspectives on the art.”

The partnership between Camp Connect at U of A and Crystal Bridges was conceived after Rodriguez and Amanda Driver, manager of Access and Inclusive Programs, visited Camp Connect last summer at the U of A. Camp Connect is a series of free weeklong camps put on by the special education faculty and staff. During the week, campers with autism and peers who do not have autism engage on various topics and activities of interest while building friendships and learning new skills.

Camp Connect at Crystal Bridges expanded on this model by bringing together children ages 9-12, with autism and not with autism to explore art in the museum’s collections and create their own art in small groups. Discussions happened around many artists’ work, including Faith Ringgold’s narrative quilt, Maya’s Quilt of Life. After the gallery discussion of the work, the campers made quilt squares inspired by the work and their conversation.

”Our goal is to welcome all to the museum,” Driver said. “That’s one reason we wanted to partner with the U of A to host Camp Connect. We want families of children with autism in the community to see the museum as a resource and to have successful museum experiences.”

”We want to give children with autism access to art, to engage their creativity,” said Suzanne Kucharczyk, U of A assistant professor of special education. “Camp Connect is also an opportunity for campers with autism and their peers to practice positive social interaction and communication which can be challenging for children on the spectrum. We expected the campers to do well in the structured studio time when they created their own art, since children with autism generally prefer such structured experiences. We were surprised how successful the campers were during the open-ended gallery discussions.”

Support for success was built into the camp experiences. Kucharczyk provided training for both museum educators and museum security staff earlier in the year about how to help children with autism and their families have successful museum experiences. To help campers and families get prepared to the experience, the camp incorporated a drop-in orientation time for the first day so that children and their families became familiar with the museum, met camp volunteers, and knew what to expect the remaining four days. Also to help prepare campers, a social story and visual schedule was created to make sure campers were clear about the activities and expectations of camp.

For Hollie Lawless, the coordinator of Project Connect at U of A, “the visual schedule was one of the best things” about Camp Connect at Crystal Bridges. “The campers would go to a piece of art, discuss it and come back to the studio and make art connected to it. There were no transition issues, which we expected, as they moved around the museum.”

The overall goal was for children to experience the museum, create art of their own, and build relationships with other children.

“This was a successful pilot program that we look forward to returning to next summer,” Kucharczyk said.