U of A Sweeps Graduate Places at Governor's Cup Competition 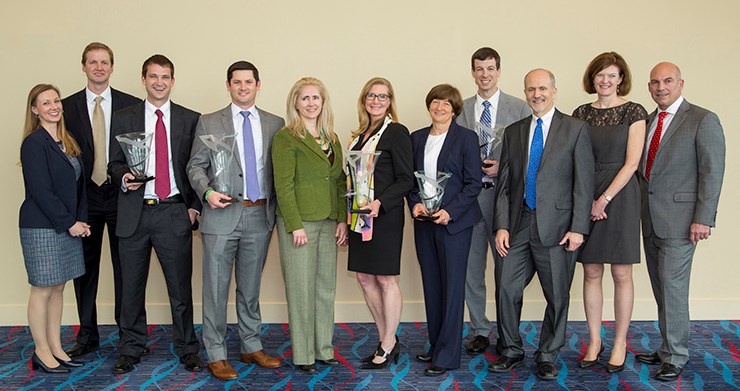 VivImmune, a start-up biotechnology company that specializes in immunotherapy for bladder cancer, finished in first place and won $25,000. The company also won the AT&T Elevator Pitch Contest for $2,000 and the Delta Plastics Innovation Award for $5,000.

Actio Systems, which developed a patient reminder and intelligent rescheduling smartphone app for medical clinics and their patients, placed second and took home $15,000.

Third place and $10,000 went to deciLvl, a company using metamaterial research out of MIT to filter out harmful audio signals in noisy environments.

The Governor's Cup is the premier collegiate entrepreneurship competition in Arkansas. It was established in 2001 to challenge students who have ideas for new or better products or services. The goal is to see if the students can put their idea through a rigorous and real-world entrepreneurial process to create a profitable company.

VivImmune and Actio Systems will advance to the Donald W. Reynolds Tri-State Awards May 25-26 in Las Vegas, where the teams will compete against the top two graduate teams from Nevada and Oklahoma.

This year, 37 teams from 11 Arkansas colleges and universities submitted business plans in the competition for a share of the $152,000 prize pool. Prizes were awarded at a luncheon at the Statehouse Convention Center in Little Rock.

Under the guidance of Carol Reeves, associate vice provost for entrepreneurship, the U of A’s competitive graduate student teams have won more than $2.3 million in cash at state, regional, national and international business plan competitions since 2002.

“We’re proud of all our teams,” Reeves said. “They’ve worked really hard this year, and we’re excited about representing our state in Las Vegas next month.”

VivImmune grew out of the research and intellectual property from the lab of David Zaharoff, an assistant professor of biomedical engineering at the U of A.

Join Deans Margaret Sova McCabe and Deacue Fields in this year's campaign, "Now More Than Ever," which has a goal of raising $100,000 to help children and families in need.

A biomedical engineering research team has been awarded $135,000 from the NSF to use "organ-on-a-chip" technology to study long-term impacts of traumatic brain injury and neurological diseases.

U of A Chancellor Joe Steinmetz wrote to the campus community encouraging everyone to continue getting tested for COVID-19 if they have any reason to believe they have been exposed.

Grants for Humanities Research by Faculty, Grad and Undergrad Students on Systemic Racism

The Steering Committee of the University of Arkansas Humanities Center has approved an expanded competition for grants funding humanities research on systemic racism. Applications due Oct. 31.