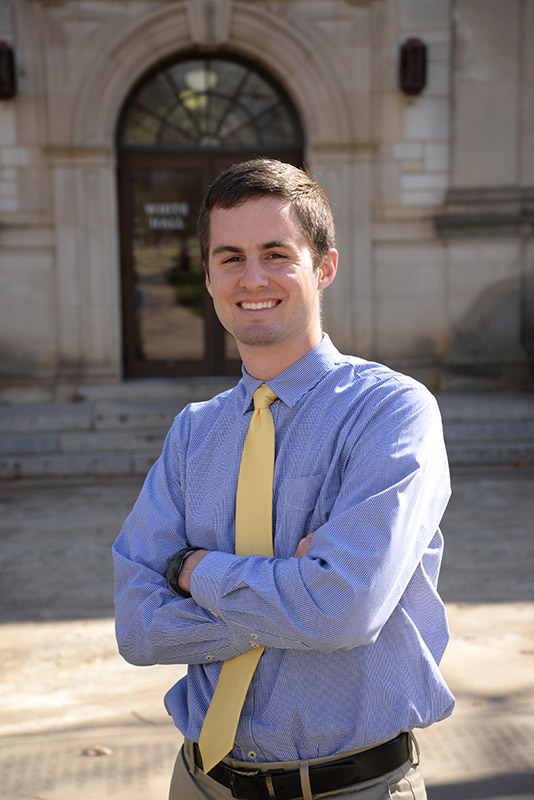 FAYETTEVILLE, Ark. - Ryan DuChanois, a University of Arkansas honors civil engineering major from the town of Greenland, has been selected as one of 35 U.S. Gates Cambridge Scholars. He will use the scholarship from the Bill and Melinda Gates Foundation to earn a master's degree in engineering for sustainable development at the University of Cambridge. He is interested in addressing water scarcity issues.

"Ryan DuChanois is a remarkable engineering student, who has conducted extensive research in green roofs, water treatment, harvesting and recycling and much, much more," said John English, dean of the College of Engineering. "He has traveled extensively, and he has already made a significant difference in water access for communities like those he focused on in Ethiopia that are most in need. This is not the first time he has received significant recognition — just last year he held an EPA Greater Research Opportunity Fellowship. He will certainly make the most of this new opportunity, and I look forward to reading about his many accomplishments in the years ahead."

Ryan DuChanois' family home in Greenland is not in a water-scarce location — it has a seven-acre lake and two ponds close by. His father's work in the road construction industry helped shape his focus.

"My father was always talking about design proposals, project bids, plans and completion dates," he said. "That's probably where my interest in engineering originated."

Such first-hand exposure to civil engineering helped him understand just how much was required to successfully complete a project, and that each step was crucial — from conceptualization to planning to implementation.

DuChanois' interest in water started with a Greenland infrastructure project when he was still in high school. The town was required to map storm water drainage patterns and needed someone who knew how to do it. DuChanois secured a grant and used his training from the Center for Advanced Spatial Technologies at the University of Arkansas to map Greenland's culverts, drainage channels and inlets.

During DuChanois' freshman year at the U of A, he participated in a study abroad trip to Ethiopia. The group built showers at an orphanage in Bahir Dar. He struck up a conversation with one of the group's translators who said she knew people who often had to scramble to find a safe place to sleep each night, or who wondered when their next meal might be. She said she frequently wondered where she could get safe water.

When DuChanois returned to campus that fall he had a goal that stretched beyond his studies — to improve the health and safety of people across the world by expanding access to drinkable water. The following summer he traveled to South Africa to research point-of-use water filter technology with engineering students from across the United States.

"University of Arkansas students compete successfully at the highest levels," said U of A Chancellor Joseph Steinmetz. "Ryan DuChanois' selection as a Gates Cambridge Scholar is an excellent example of our students achieving ambitious goals with support from nationally known faculty, who are happy to engage students actively in research. Ryan has embraced every opportunity he has had here, and the results speak for themselves. He is an excellent representative of the Honors College and the College of Engineering, of the University of Arkansas, and of the state."

DuChanois agrees that U of A faculty members have made all the difference in his success. He credits researchers and professors who have mentored him like Richard Coffman, the engineering faculty member who encouraged him to apply for the Gates Cambridge; Wen Zhang, a primary research adviser; Kevin Hall, the chair of the civil engineering department; and John White, chancellor emeritus, who is teaching a rigorous course on leadership that DuChanois is taking this semester.

"Ryan is the kind of student every professor wishes to have," said Zhang. "He will be able to experience environmental engineering from both sides — the detail-oriented technical side as well as the global point of view."

DuChanois interviewed for the scholarship in January in Seattle, Washington, along with approximately 100 other students from across the country. After his interview, he had a chance to explore the city with other finalists, and to hear what they hoped to do, both at Cambridge and in their professional careers.

"I didn't think in one weekend we could form such strong friendships," he said. "We have a lot in common. Each of us, in our own way, wants to influence people's lives for the better. That's why we do what we do."

DuChanois will work under the guidance of Cambridge professor Richard Fenner, whose focus on maintenance and rehabilitation of water infrastructure aligns with DuChanois' own research interests. He hopes to study how to properly modify existing water infrastructure to better incorporate developing technologies, such as water recycling.

After Cambridge, DuChanois will focus on developing water treatment through recycling or desalination. He plans to work for a professional engineer to gain experience and work toward a professional engineering license. Eventually, he sees himself involved in policy. Water treatment research and development interests Ryan, but he also wants to have a say in the social and economic implications of expanding access to safe water.

The Gates Cambridge Scholarship is funded by Bill and Melinda Gates through the Gates Cambridge Trust. The trustees award scholarships on the basis of an applicant's capacity for leadership, intellectual ability, and the desire to use knowledge to contribute to the wellbeing of society.

The University of Arkansas has had three previous Gates Cambridge Scholars. In 2013 Mariel Williams, who was majoring in anthropology was selected as a Scholar. She is currently pursuing a doctorate in human evolutionary biology at Harvard. In 2006 David Deitz and Lance Owen were among 40 students selected from across the country. This year, the U of A also had a Marshall Scholarship finalist, Ailon Haileyesus, and two other Gates finalists — Kimberly Cribbs and Kristen Kent — among its many nationally recognized students.

University of Arkansas students interested in applying for prestigious awards should contact the Office of Nationally Competitive Awards at awards@uark.edu and 479-575-3771.