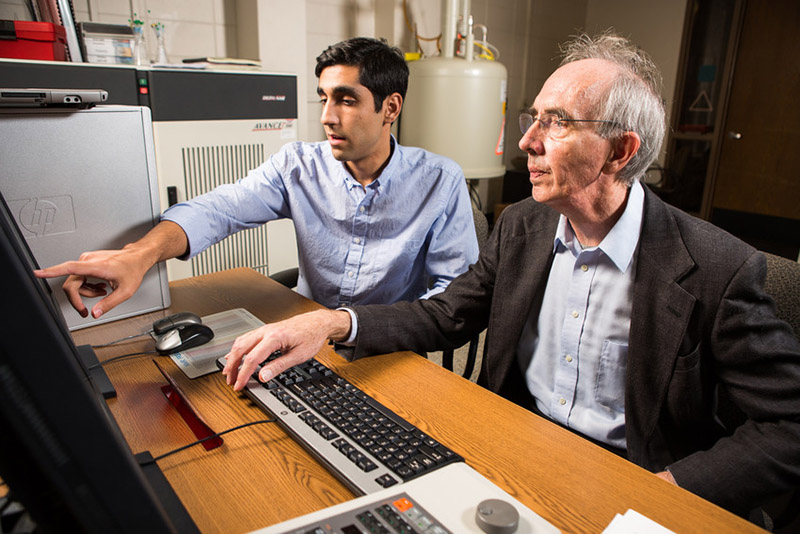 FAYETTEVILLE, Ark. — A University of Arkansas research team has published a paper in ChemBioChem, a top European journal of chemical biology, based on groundbreaking experiments led by undergraduate honors student Armin Mortazavi. The paper contributes to the understanding of the molecular properties of membrane proteins, which play critical roles in cell signaling, both for diseased states and basic biological functions.

“It could be useful in understanding how proteins aggregate, which is characteristic of some neurodegenerative diseases like Alzheimer’s or Parkinson’s – but that’s long down the line at this point,” Mortazavi said. “Our main purpose is to understand how they interact in the body.”

Mortazavi, from Hot Springs, is an honors chemistry and physics double major, a Bodenhamer Fellow, and the recipient of the Goldwater Scholarship. He is listed as first author on the article, giving him primary credit for performing the experiments that led to the discoveries. Roger Koeppe, Distinguished Professor of chemistry and biochemistry in the J. William Fulbright College of Arts and Sciences, is Mortazavi’s faculty mentor and director of the study.

The paper is titled “Juxta-Terminal Helix Unwinding as a Stabilizing Factor to Modulate the Dynamics of Transmembrane Helices.”

The U of A team used nuclear magnetic resonance spectroscopy to alter the amino acid sequences of model peptides and incorporated deuterium labels to study how the peptides move within a model for the outer membrane of a cell.

Mortazavi’s research builds on earlier work by honors student Kelsey Sparks, who studied the role aromatic rings play in the movement of the same family of peptides. Sparks was the first author on a paper published in 2014 in Biochemistry and is a coauthor on this paper.

Previous work in Koeppe’s lab found that a similar peptide helix might be unwound or “frayed” at the end. Mortazavi has confirmed that there are multiple peptides that fray at the end, limiting their extent of motion and helping to anchor them within a lipid membrane.

“What Armin has found suggests that there may be more importance to the loops within membrane signaling proteins, which have largely been ignored up to now,” Koeppe said. “His work may point us in a new direction.”

Mortazavi presented his work at the 2015 meeting of the Biophysical Society and will present his latest results at the February 2016 meeting in Los Angeles.

Koeppe has mentored more than 25 honors students, with six of them publishing their research.

“To this point, I’ve not had a student publish before they graduate,” he said. “Armin started research early, in his freshman year. ­He’s well organized, dedicated, hardworking, and he’s produced a lot of results.”

Mortazavi’s work has been supported by a State Undergraduate Research Fellowship and Honors College research and travel grants. Other members of the research team who are coauthors on the article are graduate student Venkatesan Rajagopalan and research associate professor Denise V. Greathouse.