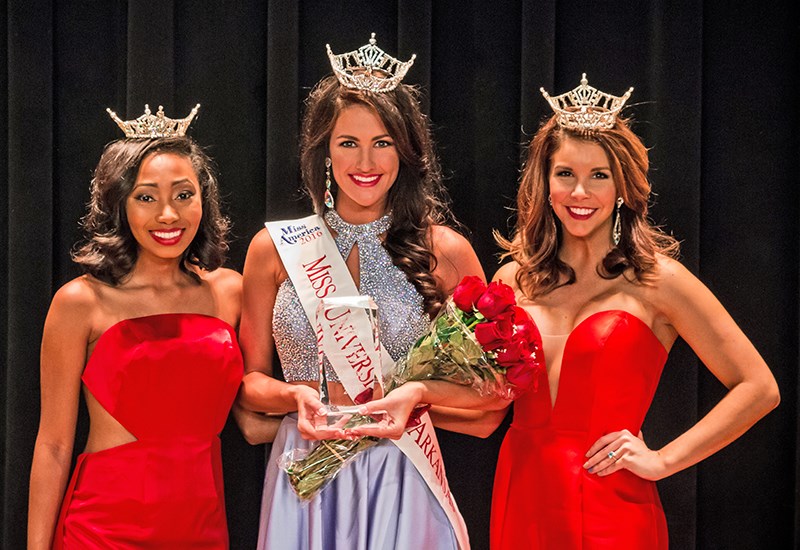 On Saturday, Savannah Skidmore was crowned the 51st Miss University of Arkansas. The junior from Calico Rock also tied for Overall Lifestyle and Fitness in Swimsuit.  Skidmore represented the Volunteer Action Committee.

She is the 20-year old daughter of Jerry and Kim Skidmore and is majoring in broadcast journalism. For the talent portion of the competition she performed a vocal rendition of "Blue Moon of Kentucky." Skidmore will spend the year promoting her personal platform, "Keep Safe for Now: Suicide Prevention and Intervention," as well as the Children's Miracle Network. She will also represent the University of Arkansas at various events including the Miss Arkansas Scholarship Pageant in July. This will be Skidmore's second trip to Miss Arkansas. She held the title of Miss Batesville at the 2015 Miss Arkansas Pageant and won an Alpha Swimsuit Award.

Skidmore was crowned by the 50th Anniversary Miss University of Arkansas, Brejamin Perkins and Miss Arkansas 2015 Loren McDaniel.  Perkins placed 2nd Runner Up to Miss Arkansas this summer and went on to represent Arkansas at the National Sweetheart Pageant where she finished in the Top 10. McDaniel was Miss Northwest Arkansas prior to winning the title of Miss Arkansas this summer. She represented Arkansas live on ABC in September and was named to the Top 15. Both Perkins and McDaniel are 2015 graduates of the University of Arkansas.

You can meet Miss University of Arkansas 2016 this Saturday, Nov. 21, at the UA Bookstore on campus. She will be signing autographs from noon to 2 p.m. in conjunction with a promotion by the Bookstore and Emerson Street Clothing Co.

First Runner Up was Erica Brewer from Lonoke. She represented Chi Omega and performed a high energy tap dance to "Fireball" for her talent. Her platform is A.D.A.M - Advancing Diabetic Awareness and Management.

The Overall Talent Winner was Jacey Winn from Winn. She also represented Chi Omega and performed a tap dance to Elvis Presley's "Bossa Nova Baby." Winn also tied with Skidmore for the Overall Lifestyle and Fitness in Swimsuit award.