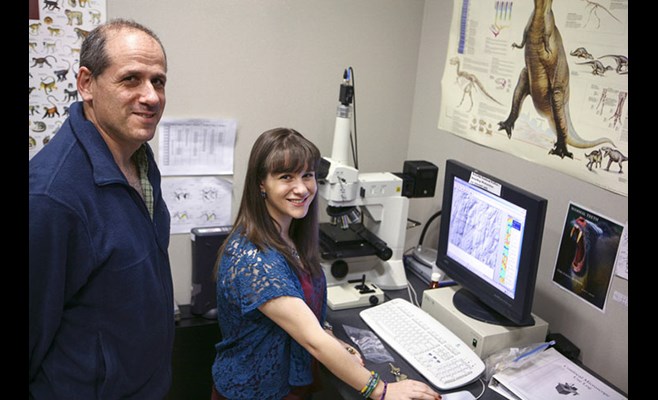 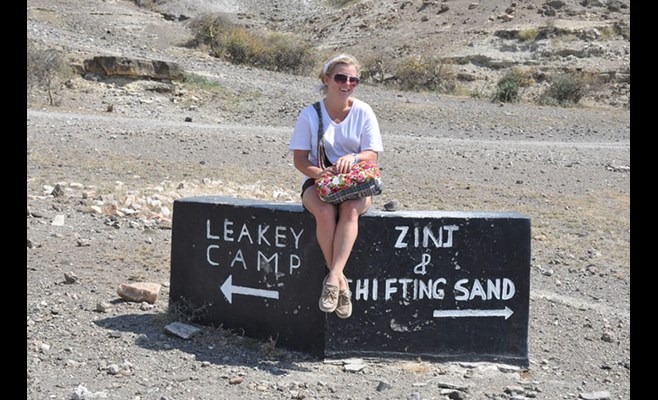 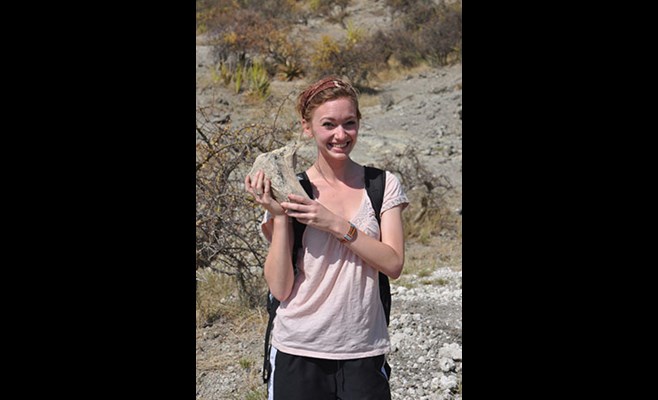 Andrea Riemenschneider at Olduvai Gorge, one of the world's most important anthropological sites.

FAYETTEVILLE, Ark. — Researchers at the University of Arkansas have established that pits and scratches on the teeth of mammal fossils give important clues to the diet of creatures that lived millions of years ago. Two new studies, both involving undergraduate Honors College students, analyze the effect of environmental change on the teeth of existing species, and may shed light on the evolutionary fossil record.

Peter Ungar, Distinguished Professor and chair of the anthropology department, mentored the students and is a coauthor on both papers.

“Human disturbance, from an ecological perspective, is not a great thing, but for folks like me, they’re really cool natural experiments,” Peter Ungar said. “If we can understand the reaction of living animals, including primates, to environmental change, then we can apply that to the past, to understand evolution. Conversely, we can use our understanding of how things change on evolutionary time scales to get a better appreciation for our effects on the environment today.”

The paper “Mechanical food properties and dental topography differentiate three populations of Lemur catta in southwest Madagascar” was recently accepted by the Journal of Human Evolution, the premier journal in the field.

Building on research by first author Nayuta Yamashita, Fitzgerald and Riemenschneider made high-resolution casts of the molds, then used a laser scanner to make 3-D models of the teeth, which they analyzed using global-information system software. Their findings confirmed different patterns of wear in different settings.

Lemurs in disturbed areas were most heavily impacted, wearing their teeth “down to nubbins – we’re not entirely sure why,” Ungar said. This finding could help scientists interpret wear-related tooth shape changes more generally.

ComparinG Capuchin and Howler Monkeys in the Brazilian Amazon

Each species was sampled from environments ranging from minimally disturbed to an area that had been deforested with the construction of a hydroelectric dam.

Young used a confocal microscope to zoom in on a very small part of the tooth – the wear area where the upper and lower teeth come into contact. The team predicted that capuchins, which eat nuts and berries, would be more impacted by environmental disturbance than howler monkeys, which eat leaves.

Their findings confirmed this prediction, and established that dental microwear texture analysis is an effective tool to detect subtle differences in diets among living primates. Studies like this one, which use well-documented specimens with differences in habitats, suggest that subtle changes in microwear may shed light on habitat-forced diet changes in the fossil record.

Peter Ungar has worked with dozens of Honors College students in the past 20 years, and several have published their undergraduate research in peer-reviewed journals.

“Honors students are bread and butter for me,” Ungar said. “I couldn’t get done what I get done, research-wise, without their help.”

“It feels great to have a publication early in my career,” said Mariel Young, who completed a master’s degree in human evolutionary studies at Cambridge and is now pursuing a doctoral degree in human evolutionary biology at Harvard. Young was awarded the Gates Cambridge Scholarship and NSF Graduate Fellowship, and credits her success to research with Ungar: “These two awards have had a huge impact on my career, and my initial research at U of A in Dr. Ungar's lab is definitely what set me on the path toward achieving them.”

“We’re very proud of these three alumni, and pleased that, yet again, undergraduate thesis research conducted by our Honors College students has been published in top journals,” said Lynda Coon, dean of the Honors College.

About the Honors College: The University of Arkansas Honors College was established in 2002 and unites the university’s top undergraduate students and professors in a learning environment characterized by discovery, creativity and service. Each year the Honors College awards up to 90 freshman fellowships that provide $70,000 over four years, and more than $1 million in undergraduate research and study abroad grants. The Honors College is nationally recognized for the high caliber of students it admits and graduates. Honors students enjoy small, in-depth classes, and programs are offered in all disciplines, tailored to students’ academic interests, with interdisciplinary collaborations encouraged. One hundred percent of Honors College graduates have engaged in mentored research.