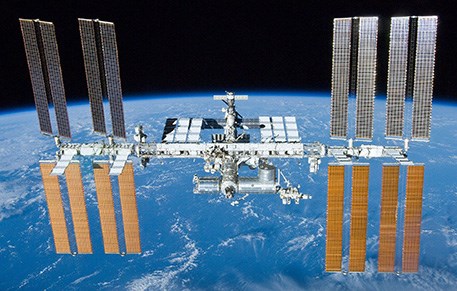 University of Arkansas researchers are developing the next generation of photovoltaic devices to be used in space missions, such as the International Space Station.

FAYETTEVILLE, Ark. — Two University of Arkansas researchers working on a promising new material to create more efficient solar cells will lead a corps of Arkansas scientists chosen to develop the next generation of photovoltaic devices used in space missions.

Shui-Qing “Fisher” Yu, associate professor of electrical engineering, will serve as principal scientific investigator on the multi-institutional project. The team will  develop photovoltaic devices made of silicon-germanium-tin, a powerful semiconductor that has been proven to increase efficiency in electronic devices that source, detect and control light.

The project is made possible by a $750,000 NASA/EPSCoR grant to the Arkansas Space Grant Consortium Office at the University of Arkansas at Little Rock. EPSCoR — Experimental Program to Stimulate Competitive Research — is a funding program to increase state participation in competitive aerospace-related research activities.

“We are excited that our material research has been recognized by NASA,” Yu said. “Now we have the opportunity to move forward developing a high-performance solar cell for space applications.”

For the NASA project, the researchers will capitalize on their already extensive investigation of silicon-germanium-tin to develop photovoltaic devices that can be integrated into existing solar cells to achieve a more efficient, optimal energy yield. Current, “triple junction” photovoltaic technology used by NASA has reached its efficiency limit. The new material is intended to boost performance, helping NASA achieve its 15-year, 45-percent efficiency goal for solar devices. The new material should also lower the cost of manufacturing and make the devices more radiation tolerant.

The researchers grow and characterize silicon-germanium-tin materials on silicon substrates through a process called ultra-high-vacuum chemical vapor deposition, made possible by sophisticated equipment and machines in laboratories directed by Yu and Naseem.

Related to this research, Yu has also received a $96,455 grant from the U.S. Army Research Office to upgrade equipment used to characterize silicon-germanium-tin-based devices.