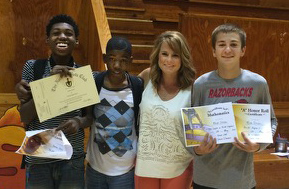 Emilianne Slamons is the third Arkansas Teacher Corps Fellow to receive teacher of the year awards in their school districts.

The College of Education and Health Professions at the University of Arkansas established the teacher-preparation program in 2013 to address teacher shortages based on both geographic area and content area.

Formerly of Elkins, Slamons teaches math to seventh- through 12th-graders at Dermott, a district with an enrollment of 415 students. Dermott is in Chicot County, which borders Mississippi to the east and Louisiana to the south. Her students call her Coach Slamons because she also coaches girls' basketball and track at the high school.

"Her colleagues know she is a good, effective teacher," said Kristi Ridgell, Dermott superintendent. "They voted her teacher of the year."

Ridgell became superintendent after serving as interim superintendent last school year as well as elementary principal. She instituted a new program of awards for teachers to allow the district to show its appreciation as well as to build respect and rapport among the teachers. Awards were given in several categories such as lesson plans, classroom management and parental involvement.

"She goes way above and beyond the call of duty to make sure students get what they need to have a quality education," Ridgell said. "She builds relationships with the kids and she is always positive. They know she cares about them. Her classroom environment is always conducive to learning. She is a great asset to our school."

Slamons was named an Arkansas Teacher Corps Fellow in 2013. She will begin her third year of teaching at Dermott in August.

Arkansas Teacher Corps Fellows go through six weeks of intensive training in the summer after being chosen for the program and are assigned to high-need schools in south, central and northeast Arkansas. Applicants are required to have a bachelor's degree in any major and demonstrate academic success alongside a service orientation. Fellows make a three-year commitment to the program.

Slamons said she is concerned about the whole student, not just the student's knowledge of math.

"Teaching is not what I expected," Slamons said. "I feel like I am teaching so much more than math. I'm teaching life skills and building character so that my students know how to respect others, how to save money, things like that. I have crackers and peanut butter in my drawers because you never know when someone will come to class who hasn't eaten. I feel like a mother."

She played college basketball at the University of Arkansas at Monticello before coming to Fayetteville to finish her degree in mathematics. She said a lot of the girls at Dermott were more interested in cheerleading before she came there.

Slamons is working on a master's degree in educational leadership through an online program offered by Arkansas Tech University. She is interested in being a school administrator.

Arkansas Teacher Corps has the support of the Arkansas Department of Education and collaborates with school districts and community organizations. Funding for the program has been made available through collaboration between the College of Education and Health Professions, the Walton Family Foundation, the Winthrop Rockefeller Foundation, and the Women's Giving Circle at the University of Arkansas. The program is also supported by individual donors through the Arkansas Teacher Corps Society.